Well, what do you know? Most of you saw the same thing I did in our bathroom hand towel – a lion – and I’m a bit relieved it was obvious to so many. I especially liked Shawna’s comment because she shared what I thought – this quirky lion hiding in the swirly print could be a roaring Rorschach inkblot. Roarschach – get it? Okay, let’s move on… 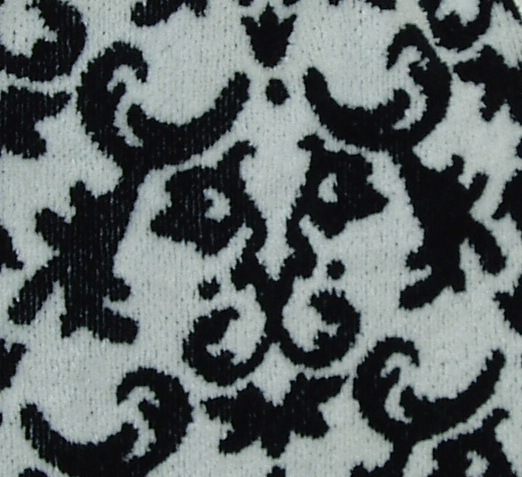 Did you also see Leo’s other details? I think he’s a male lion with “mane issues” – for some unknown and probably tragic reason, he has wispy, feathered bangs and a bit of a spiky pageboy haircut on the sides. He has a tiny little crown on his head with a teardrop of a jewel hanging from it, and a small Elizabethan ruff at his neck.

If you really use your imagination you might be able to see that he’s got his elbows akimbo and is curling his front paws inward almost under his chin. And he looks a little worried and slightly humiliated to me.

I wonder if he’s upset about what they did to his mane.