We’ve been slowly working on our living room for nineteen months now. When we moved into this new house, the living room served as the main place to pile up boxes almost to the ceiling, and it was the chief area where the grans rode their new bikes with training wheels around and around, around and around.

Then the boxes were eventually unpacked. And burned. In a fire-pit. With smoke billowing and flames leaping. In the back yard. But that is another story.

Then the bikes went outside when the weather warmed.

We kept making changes to the living room, then Michael and I would both pull chairs in there to sit, contemplating the next thing we wanted to do.

The first thing we did in the living room was have a strange, arched, built-in glass book case in the wall filled in. Then the walls and ceilings were newly plastered. Then we painted the walls and ceiling. Then we installed crown molding. Then we bought a few items of furniture, one piece at a time. Then we had the living room’s beautiful hardwood floors (gasp) carpeted. Then we rolled around on the carpet, as is our family custom.

The few projects left for this room are: order a fireplace surround, have window seat cushions made, get sheer curtains for the windows in the window seat, and hang the remaining pictures.

Which brings me to today’s post, which could also have been titled,”One of these things is not like the other…,” which I think most of you can sing by heart from Sesame Street.

We like birds in this house. Or maybe I should restate that – we, in this house, like birds. We don’t like to have birds in the actual house so much. Michael was devoted to birds long before he met me, and I have liked birds ever since a cardinal sent from heaven gave me much needed hope several years ago.

We have this big space on one of our living room walls that I wanted to fill with some kind of art. I didn’t want a huge piece, and instead decided that I would get three or four matching pieces – maybe framed, botanical prints.

Then when I was perusing an online art site, I found some neat bird prints that helped me decide we’d have an ornithological art grouping in the living room rather than a botanical one.

They arrived last week and I’m very happy with them, with one reservation. I ordered them to be exactly the same size, so they can hang on this big wall space one right next to the other.

Here’s how they arrived:

The goldfinch is framed slightly smaller than the other two. I went back over my order and saw that it wasn’t my mistake, so I called the company and they cheerfully agreed to send me a new goldfinch, framed exactly the same size as the Eastern Bluebird and the Northern Cardinal. The company’s service is really fast; the new goldfinch arrived from California within four days, and….it was the same size as the original smaller goldfinch. Rats.

But I don’t have a place for them in my house. Who needs three large framed prints of goldfinches, two a little smaller than the other?

Or maybe someone reading this blog who is local and loves birds and has claret for one of their decorating colors would like them? 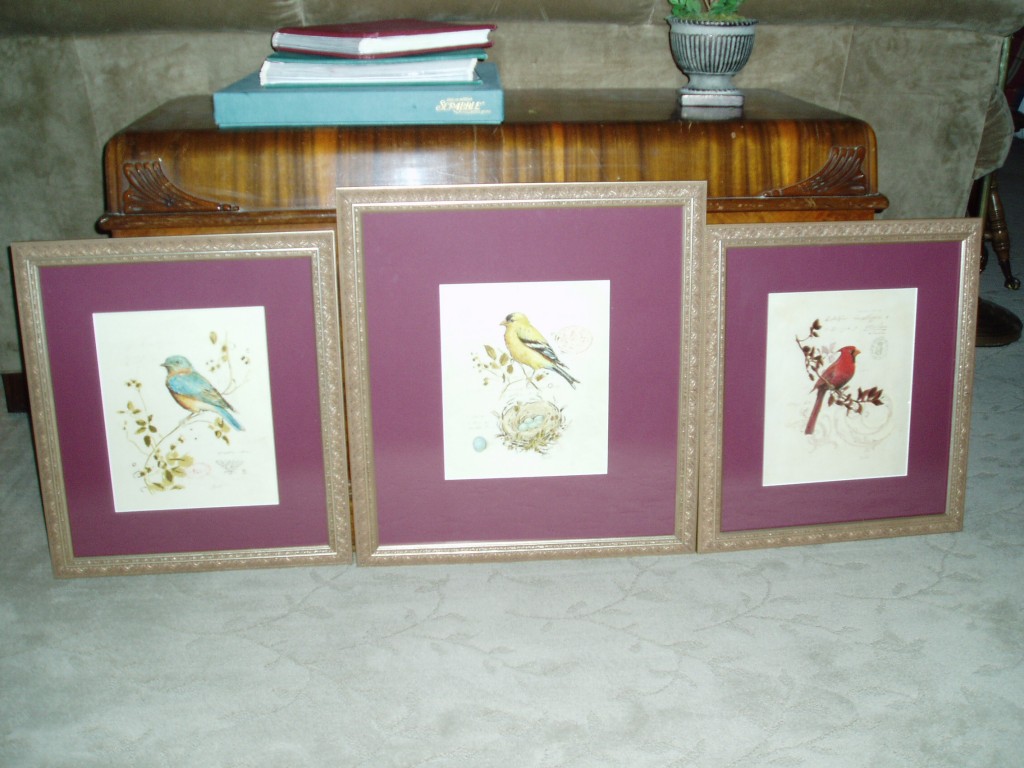 Still no takers on beautiful goldfinch prints, framed and matted?