A couple of weekends ago we had one day that gave us a break from the heat and humidity, so Lloyd and I decided to take an early morning bike ride. We usually ride on the Lakewalk near Lake Superior, sometimes going ten miles if our butts don’t complain. Lloyd now has men’s padded cycling shorts and says they really help. The thought of adding padding of any kind to my clothing makes me laugh, so I haven’t gone that route yet.

We rode up and away from the Lake for the first time, all the way to Forest Hill Cemetery where Michael is buried and where my body will someday be laid to rest next to his. Most of the way is uphill, some of it eye-bulgingly steep, which would have made it impossible without our RadCity Ebikes. Even at full power, there were a few hills where I had my bike in first gear, full throttle, and still had to peddle with all my might to get up the grade. (Cue the Wizard of Oz song when Miss Gulch is furiously peddling.) But we made it. And then we rode around in the cemetery, under the shady trees that overhang the quiet lanes. We stopped to water the flower basket at Michael’s grave, and I took this picture. 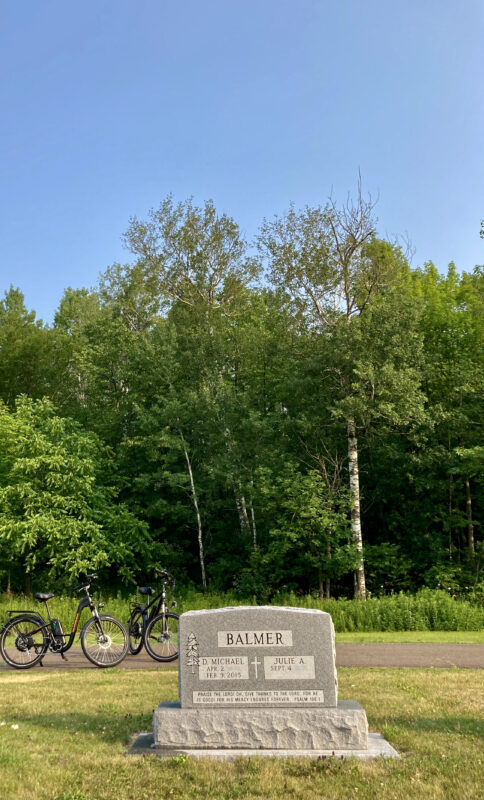 Six years ago I could never have envisioned for my life all the things that have taken place since Michael died. Sometimes it still surprises me that I’ve been remarried for almost two years, that I actually own and ride an electric bike, that I donated a kidney named Justine to a stranger in Madison, Wisconsin, that I still floss my teeth twice a day, and that I joined the Senior Citizen Traveling Circus and began training to be a trapeze artist. Who would have thought? No one, especially me. (Or that my sense of humor has taken a twisted turn, in case you hadn’t figured that out.)

Anyway, I have had a few medical mysteries that have needed solving in the past couple of years, and even Mayo Clinic didn’t seem able to help. (It’s no fun to know people who go on and on about their symptoms, but here I am, getting ready to do just that.) I have had an alarmingly elevated CRP (C-Reactive Protein) level for a few years now. Normal is 1–4, mine has gone from 1.4 to 7 to 7.4 to 11 to 11.7 to 13. It’s an inflammation marker and if you look up the numbers mine say I’m in danger of an imminent event. I feel at all times like I’ve got this low-grade burn going on in every cell of my body, yet I am always chilled.

Then several weeks ago I started to feel awful. I had a headache 24 hours a day, was gasping for air when just walking from my bedroom to the kitchen, and felt like I was constantly moving in slow motion or underwater, with no energy reserves. I’ve always been someone who had plenty of energy, from the time I woke in the morning until I went to bed at night. I’ve never needed naps, rarely felt fatigued, and I began staying quiet and not talking much in an effort to conserve energy. It was disconcerting because I could feel how wrong something was deep inside.

So I decided to have all my medical records transferred to an internist, and I had my first appointment with her recently. I’ve been told that internists solve medical mysteries and I thought, “Sign me up with her.” My blood tests came back all haywire, with pink colored red blood cells instead of red ones, distorted and misshapen blood cells, high sed rates, and more. I’ve always had good test results and am one of the few old people who takes no medications because my health has always been good. My doctor had more tests run when she saw all the weirdness, and called me to tell me my iron was so severely low and I needed to have an endoscopy and colonoscopy as soon as possible to check for internal bleeding.

Oh, then came the delightful low-fiber diet and fun 24-hour prep for having tubes fed through your body. Thankfully, the gastroenterologist found no bleeding, no tumors or polyps, and said I’d be contacted after the tissue biopsies came back. I guess they check for every little thing, including celiac disease.

Well, I learned what the problem is — a significant H.pylori infection in my stomach. Over half the planet’s population has H.pylori, but apparently it takes hold in some people and causes all kinds of trouble, including iron-deficiency anemia and elevated CRP levels. Aha. So this brew of replicating, acid-eating, gut-damaging bacteria could be the reason for all my trouble. They are hard to eradicate, however, so two antibiotics and an acid inhibitor must be taken three times a day, for two weeks. And the nurse said, “Be sure to eat yogurt — you don’t want a yeast infection!” No. I did not want that on top of weirdly shaped, red blood cells that aren’t red and don’t carry any iron and make me feel sick and gasping and 87 years old.

I got to the end of my round of big gun antibiotics, and even though I took probiotics three times a day, ate yogurt and drank kefir, I got a systemic yeast infection. Such a very pleasant experience. Next were more pills to counteract that, and thankfully I’m finally feeling better.

I won’t know for a few weeks if the H.pylori are gone, if my CRP goes down, whether or not my iron rebounds and my red blood cells begin to look like they should, but today, I don’t have a headache. I still get out of breath more than I used to, but I can now walk from one end of the house to the other without needing an oxygen tank. So, I have much to be thankful for. I had a lot to be thankful for even when my stomach was an evil cauldron of bacteria, but I’m cautiously optimistic today.

Today I have a pot of soup simmering on the stove, and tomorrow I will take some to a dear friend who has had a challenging diagnosis. I love her and know I can’t do much, but I can take her a meal.

I just finished a unique book you might like called The Story of Edgar Sawtelle and am now back into Kathleen Norris’s The Cloister Walk. The former makes me want to own seven large, well-trained dogs, the latter makes me want to drive to an abbey in North Dakota and spend a week with the monks there, praying the liturgy.

What book are you reading right now?