Of carpet, children, cookies, and Christmas in the Alps

I’ve been awake since about 5:10 this morning because of Edith. Now that she’s a post-menopausal Schnauzer, I’m pretty sure she has bladder control issues, and she noisily jumps off the bed every morning when it’s still blackdark, needing to go out. I dare not ignore her, because if I turn over and go back to sleep she could eventually just pick a place in my bedroom to go. I would never see it because I have an acre of thick, Swedish shag carpet, but in a few days I might detect a whiff in the air when I walk into my bedroom. I could search and search this big room, even enlisting grandchildren to crawl around on their hands and knees to see if they can find the offending invisible spot so I can scrub it, and might not ever find where Edith found her relief.

So basically I’m saying my life revolves around the weakening bladder tone of a deaf and elderly Schnauzer.

This early morning jingle-jangle of the name tag on her collar, and her restless snuffling and pacing is about as active as she gets. It’s downhill from there as the day progresses, because Edith sleeps so much now. She’ll be fourteen in March. 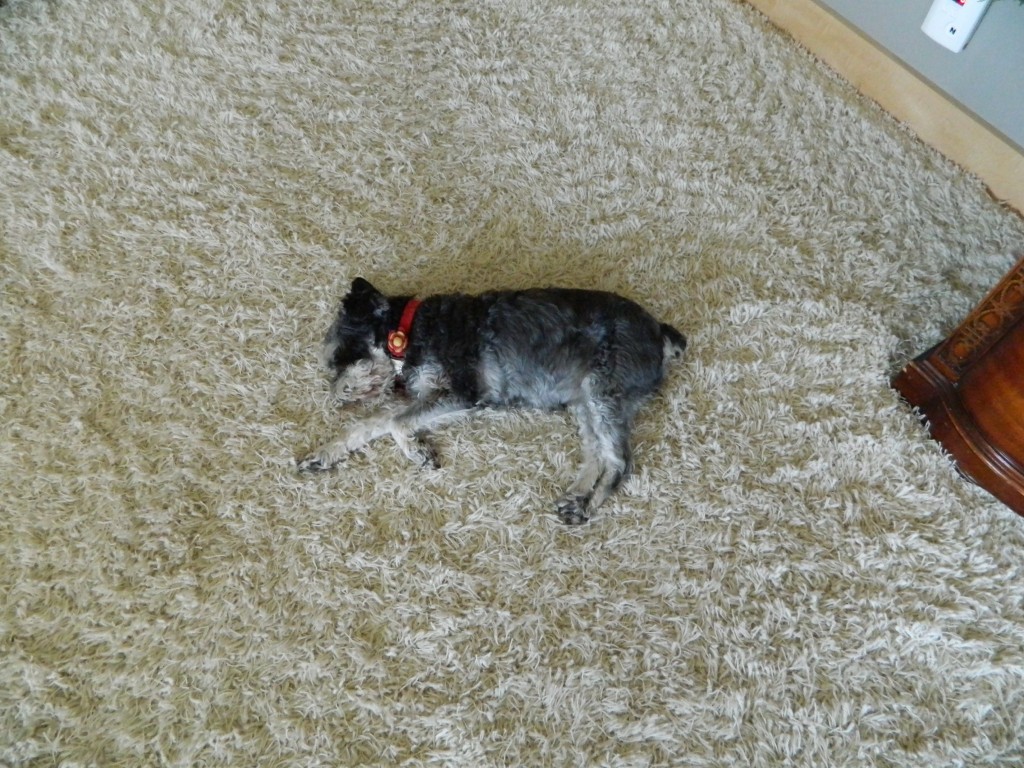 This is how Edith can be seen most any hour of the day.

I will be seeing four of my grandchildren today. Later this morning, Vivienne and Audrey will be performing in a play at our local community playhouse. They’re in Little Red Riding Hood and Vivie plays the lead. Audrey has a secondary part I never knew was in this story, but I’m sure they will both stun me with their acting debuts and I will probably sit in the audience and sob quietly. I do that a lot when observing the wonder I find in my grands. They overwhelm me with their lives and humor and tenderness and beauty.

Then I’ll come home and set to cookie baking. I’m trying to figure out if I want to lug the unwieldy but efficient Kitchen Aid mixer up from the basement to mix the dough for my Spicy Molasses Cookies. Tomorrow is our mother/daughter cookie exchange and my three daughters and I will all be having lunch at a local Japanese restaurant before exchanging what we baked.

Then later this afternoon, Li’l Gleegirl and Louiser will be coming to spend a couple of hours with Grandma. Their daddy is at a Lego Robotics conference with older sister Mrs. Nisky, and big brother Mr. McBoy is at a boy scout leadership weekend. Their mama has a photography session. I’m not sure what the girls and I will do, but I’m fairly sure it will involve books, peanuts and raisins, Magformers, lots of conversation and some good snuggles.

The Christmas CD we have playing almost non-stop in our dining room stereo right now is Rick Steves’ European Christmas. I also watched his TV special recently about Christmas in Europe and found it utterly transporting. My favorite was the segment on Christmas in Switzerland, and if you would like to see the short clip, click here.

At the two minute mark, you can see them slide down the mountain toward Gimmelwald after having cut down their tree in the snowy forest. I don’t know what those bicycle/sled contraptions are called, but I want one, and I want to ride it down the mountain into Gimmelwald at dusk just like they did. I want the torches, I want the goats, I want the snow (for a month anyway), I want the Swiss cowbells, the fondue around small carved Swiss tables, and I want to feel a part of something ancient and traditional.

I’d love to know which of you reading this post would like to ride one of those dealy-bobs too?

Well, the sun is rising and it’s time to get dressed and start my day. I have a standing date with my gratitude journal, two devotionals, and my Bible and CBS lesson.

Have a blessed weekend!