I was up early this morning and was so taken by the brilliant sunrise. We’ve had several of them lately. This was taken from our dining room around 6:00 a.m. Just beneath the dark pink colors is Lake Superior. (Click to enlarge if you like.) 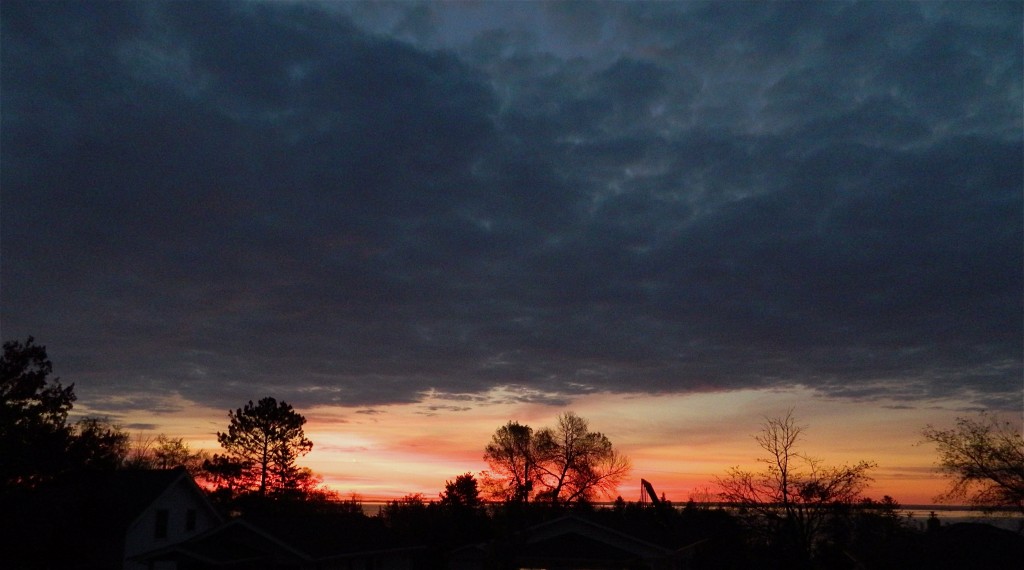 Our eleven year-old Schnauzer Edith has been ailing slightly, so I took her to the vet this morning after breakfasts were served and our Fosters departed for their jobs. Edith has one bloodshot eye, and she’s also been licking spots on her upper arm, her paw, and her belly. We’ve put her in The Cone of Shame for a couple of weeks now, to help let the raw spots heal, but as soon as they did and we removed the cone from her collar, back she went to worrying those areas.

The vet found two tiny old-dog growths on each eyelid which are probably irritating the surface of her eye, and they need to be surgically removed. To the tune of $700 (or £437). Yikes. He checked her very carefully and did not think she has fleas (thank the Lord), but instead feels she has developed seasonal allergies. We will try a little Benadryl to give her relief, and wait for snow. If the snow clears everything up, we’ll know the vet was right about allergies. And even though he didn’t think this was necessary, I did buy some new food for her with no carbs in it, and lots of good protein and vegetables. The dogs’ food has been high quality but does have brown rice in it, so we’ll see if the new stuff makes a difference.

Today, like most Mondays, I have piles of paperwork to do. Reports to mail, checkbook registers to balance and statements to reconcile for our Fosters, laundry, dinner to conjure (ha – wish I could!), bills to pay and my CBS lesson to finish, but not necessarily in that order.

Last weekend I had a couple of free hours and decided to go see a movie. Michael wasn’t up to it, so I went alone and ate some Butterfinger Bites while watching the armrest-gripping movie Gravity. You can see the trailer here. I liked the movie a lot, but it was intense and I would have liked the ending to be a little different. I could also see why some people would hate a movie like this — it wasn’t what you’d call relaxing entertainment.

Yesterday morning when we got up, we came into the dining room and kitchen area to see that Sara had brought up our bin of various pieces of fall decor, and festooned the mantel with a few things. 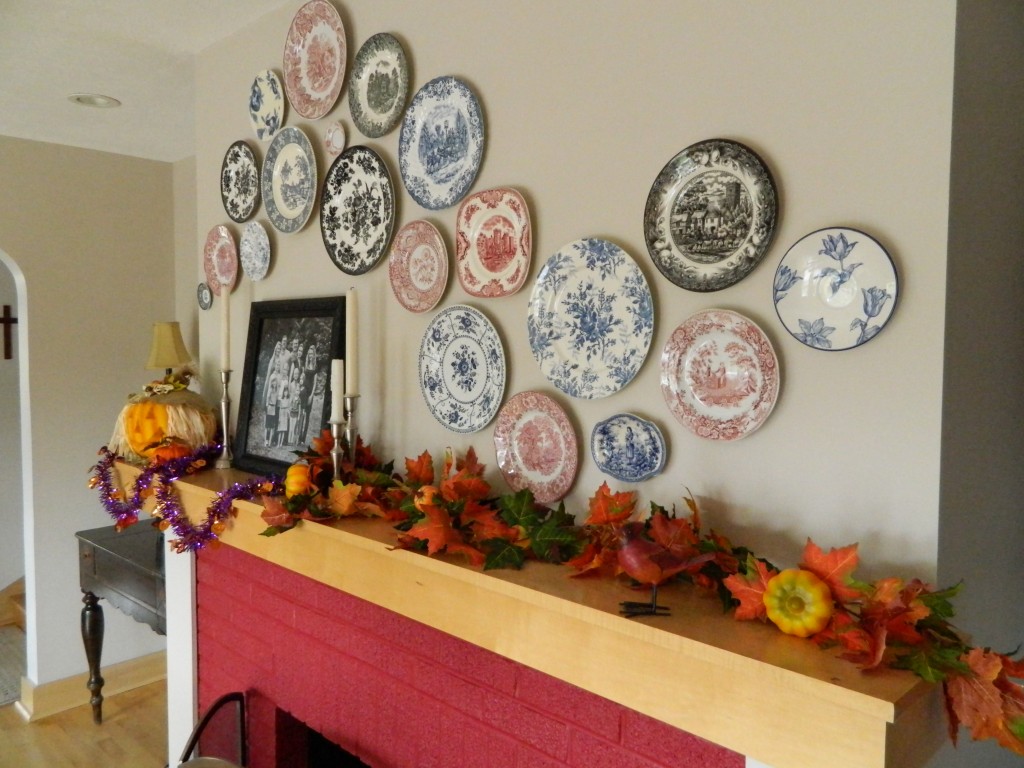 The pumpkin at the far end plugs in and glows in the dark. Its lights slowly change from green to yellow to orange to purple, and our grandchildren have always loved it.

I am 18 weeks post-op from my knee replacement surgery and coming along. My range of motion has gone up to 115 degrees a few times, and my PTs tell me that 120 degrees is what they see most often when a patient finishes PT, so I’m encouraged by that. I’ll wait until I am 52 weeks post-op to fully decide how satisfied I am with my decision for surgery. There are many pluses already — no more grinding arthritis pain, no splaying deformity, no deep, throbbing ache that wakes me up at night. But there are challenges with this major surgery too. Whew.

Last week Michael and I took a drive up the north shore of Lake Superior, to see the fall colors before they fade and winter sets in. We drove as far north as Gooseberry Falls, and we both said to each other how we never tire of the beautiful north shore drive.

Michael’s health continues to falter and some days I confess I’m not sure what I will do. I’ve been asked, “What are you going to do when Michael can’t walk anymore?” and I say, “I don’t know.” I’ve always been someone who’s task oriented and can look ahead and make decisions about whatever is needed, but not with Michael and the Parkinson’s disease which has robbed so much from him. My friend Shari reminded me that perhaps a call to a social worker is in order, and I might do that soon, just to see if there are some home options for us. It’s not like I can’t take care of him right now. I can. But watching him walk is heart breaking. He used to festinate a couple of times a day (it’s the odd, rapid shuffling advanced PD patients do) and now he does it constantly. I am hoping that he’ll be willing and able to use a walker soon, but so far that hasn’t happened. He has daily confusion as the Parkinson’s dementia makes itself known. He also can’t cut up his food anymore and doesn’t seem to see the need either. So when I intervene and say, “Here, let me cut that up for you,” he’s sometimes fine with that, and sometimes he resists. I think I’ll just try cutting up his food before I serve it to him. That was sort of a duh moment, eh?

I know that Michael looks to me as his everything, and sometimes that’s very touching, and sometimes it can feel a bit smothering too. It hasn’t gotten to the point where he can’t be alone for a couple of hours (as in Tuesday mornings when I go to Community Bible Study), but I can tell he feels a big, relief-filled exhale when I walk in that door. He thinks I’m his glue, his anchor, his protector, the one who will make sure everything goes okay. And most of the time I just realize that this is the way things are, and I go with it. I ask God to help me and He does. I love my husband and remember all that he has been to me, to our family, and I give to him because it’s what spouses do. But I have my days. I descend into self-pity and tears every few weeks, and have just accepted that it’s not the end of the world if I do. I go to our bedroom and cry, and feel sorry for myself because no one is looking after my interests and comfort like I look after those in my home. I can do the martyr thing pretty well. But then after I blow my nose and stop sniveling, I start to recount the blessings I have. It sounds so trite to say “count your blessings,” but powerful things often do sound trite and simplistic.

We’re studying Daniel, Job and 1 and 2 Peter in CBS this year, and we began with Daniel. I’m in a core group of 15 varied and wonderful women, and am challenged and encouraged by our study and discussion. I’ve read Daniel before, but this time I’m struck by how awful it must have been for young Daniel and his friends to be literally kidnapped from their homes and families and marched hundreds of miles to Babylon in the exile. I can certainly see that Daniel, Shadrach, Meshach and Abednego weren’t whining about the horrible turn their lives had taken. They decided to love and serve their God more than anything else, even life and comfort. When faced with compromise or the prospect of a torturous death, they chose death. They lived humbly and confidently in the face of King Nebuchadnezzar’s maniacal anger and arrogance. When trouble came, Daniel and his friends grew alarmed (I was so glad to read that!), then began to thank God, recount His past faithfulness, and plead with Him in prayer. And God was faithful to them in miraculous ways, even though the miracles He did on their behalf didn’t really make them tra-la-la happy and comfortable. To our knowledge, Daniel never got to return home to Israel. He died in Babylon an old man, having served his God faithfully his whole, difficult life. We’re only in chapter four, but already I’m asking God to help me apply what I’m learning. When I’m alarmed (or overwhelmed or frustrated or exhausted), I’m so glad to know it’s okay. But then I’m trying to remember to begin thanking God for who He is, and for His faithfulness to me for 56 years. He saved my fourteen year-old life when I was almost dead in an emergency room. He has forgiven so much! And then, I pray. I’m still learning about this one. Prayer is such a mystery to me. I think it’s simple, but then I don’t get it. I get it, and then I think it’s really hard. I’m all over the place with prayer, but I’m still praying.

I guess this is enough for today. After I get to my aforementioned tasks, I need to go be an anchor and some glue for someone waiting for me in the living room.

I know who our glue and anchor and deliverer and protection really is…I know you do too.