Among the many hats I wear (virtually all of them are rumpled and fall down over my eyes), the chef’s hat is the one I am most plagued by these days.

On average I make about twenty meals a week (we usually go out to dinner once a week) and I am losing steam and good ideas about what to prepare. It’s not for lack of great recipes. I guess I’m just entering a phase of life that makes cooking seem like climbing Everest. Does anyone out there relate or am I the only one?

Breakfasts are easy enough, as all of us have specific things we prefer and most of us don’t deviate from that. Michael wants a bottle of kombucha as soon as he sets foot in the kitchen in the morning, soon followed by toast and peanut butter or eggs and hash browns. I like a small bowl of homemade Swiss Muesli, and Millie and Edith like Natural Balance. Others in our household like cereal and fruit, or two pieces of toast and two eggs, over easy. So when I’m bumbling around in the kitchen each morning (and it’s now dark outside when I get up) I can make all these things without thinking, as if I’m Rosie the Breakfast Robot.

Lunches aren’t bad either, but they aren’t quite as easy for me as breakfasts. I have to pack one or two lunches in the morning and I’m always trying to think of creative twists to making a sandwich or a container of leftovers (everyone around here loves leftovers, so that’s a plus), a serving of fruit, a salad or serving of vegetables, a slightly virtuous snack and a drink.

Here’s a quick lunch that I feel a little guilty about: a turkey sandwich on WW bread with mayo and lettuce, a banana, two ginger snap cookies, a small bag of grape tomatoes and a can of someone’s favorite diet pop. Here’s a lunch I feel better about, because I am on the slippery slope to becoming my mother and somehow think that home cooked means better, which I know isn’t always the case: a small container of the chicken, squash and rice casserole we had the night before that everyone raved about, a small container of my marinated red cabbage salad, a small container of fresh, sliced pineapple, a hard-boiled egg and a bottle of water. Maybe it’s the small containers that make me feel better about some of the lunches I make.

Dinners are another matter. I am managing and no one is complaining, but since I’m the only cook in the house, every morning I have to think ahead about what we’ll have, and I should be working on it by 10:00 a.m. Our days can be so busy that to turn my thoughts toward dinner at 3:00 p.m. just doesn’t work for me. I have friends who just do the “fend for yourself” method with their families occasionally, but again, we couldn’t do that here.

Michael readily admits that cooking is not his forte. If it were up to him to cook, we would have sausage, fried eggs and hash browns for dinner each night. Because I halfway value our cardiovascular health, we don’t go this route. 🙂

One night long ago Michael and I had a rare evening alone. Everyone else was being treated to dinner and a movie out, and we were home and I didn’t have to cook! In fact, I didn’t even want dinner. I wanted the luxury of not cooking and not eating dinner for one night. I gently told Michael he could have whatever he wanted for dinner, but that I was taking the night off from cooking.

I thought you might like to see the gourmet meal he prepared for himself. He was quite resourceful, using the leftover homemade spaghetti sauce (my grandma’s recipe that can’t be beat) I had made two nights before. Maybe Michael’s meal could be featured in the next edition of “Three-Ingredient Dinners” cookbook, because it consisted of 1) whole wheat bread, 2) the aforementioned homemade spaghetti sauce, and 3) grated parmesan cheese.

Pioneer Woman, read it and weep. 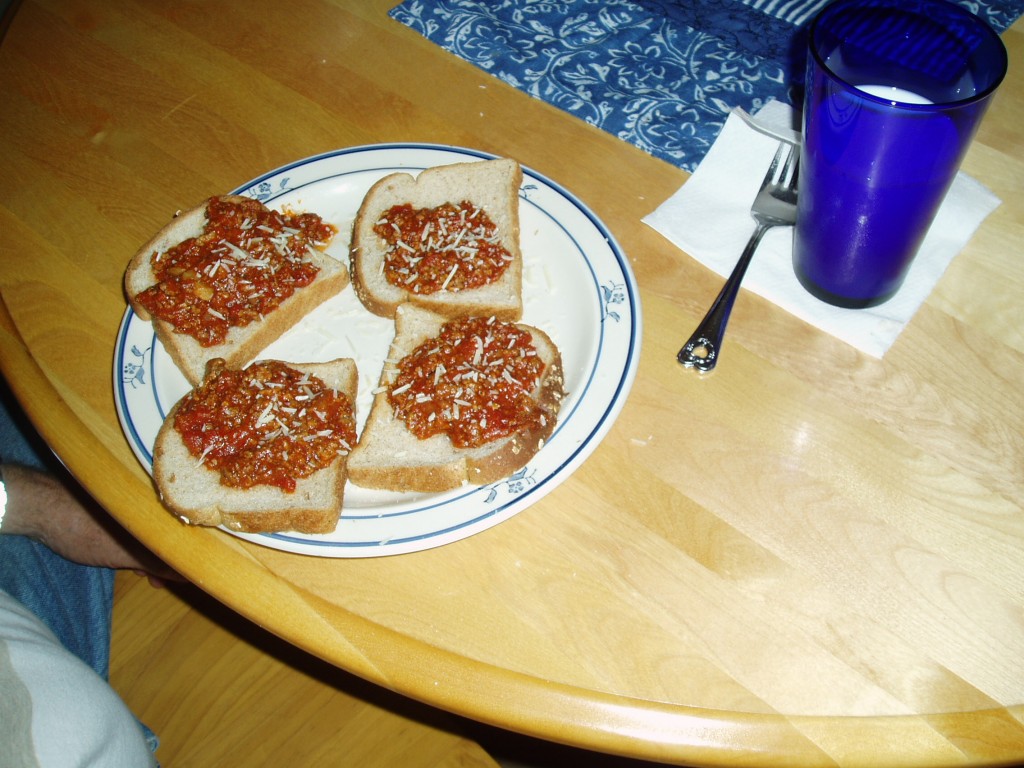 He asked if I wanted him to make some for me. He said it was delicious. 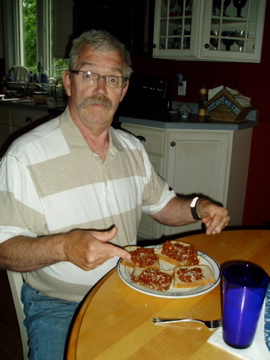 He’s thinking of opening a diner soon – he’s sure that there are many people out there who would appreciate a simple home-cooked meal now and again.

I’ll give you plenty of warning before it happens, though.