A date at the cemetery

We have some beautiful cemeteries in our area and I like to take my grandchildren there. They aren’t quite as interested in strolling through the centuries-old headstones and reading the names and dates as I am, but our grans do like to feed the ducks and the geese that live on the beautiful grounds.

At one of our cemeteries there are two large ponds surrounded by trees (and graves), and there are gaggles of Canada Geese and flocks of Mallard Ducks always waiting for handouts of cheap bread that I buy at the local Piggly-Wiggly. (That we even have a grocery store called Piggly-Wiggly is another story in itself; when I moved to Minnesota from California in 1981, it took a long time to get used to writing checks made out to Red Owl and Piggly-Wiggly.) There are other kinds of geese and ducks at the cemetery too, but I don’t have time to look up their different names. The other geese have huge, orange knobbly beaks that bulge out in between their eyes, and the other ducks have iridescent purple feathers on their wings and shoulders. Maybe these other birds are called Knobbly Beaked Geese and Iridescent Purple-Feathered Ducks.

Anyway, not long ago Grandpa Michael and I took Elijah to the cemetery to feed the geese and ducks. The grandchildren consider this outing to be great fun, and I enjoy it because it’s quiet and we can be outdoors, and we almost always see something that delights us.

The morning we went it had rained and it was still a little foggy out. As soon as the birds saw our van they started waddling toward us, and here are some pictures from our time. 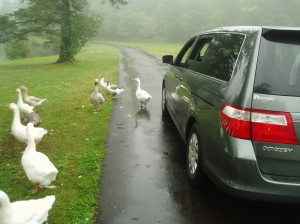 Greeted by a gaggle 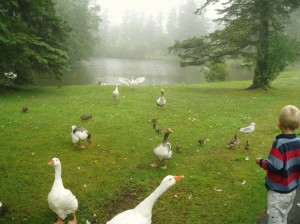 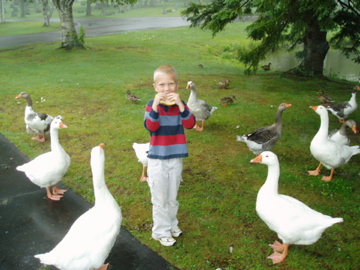 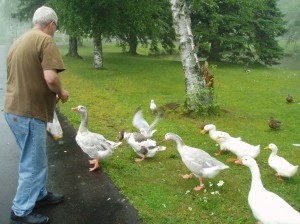 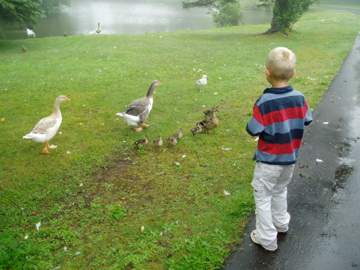 Elijah waiting for the babies to approach 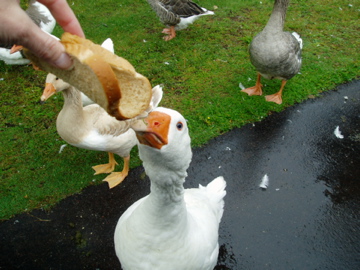 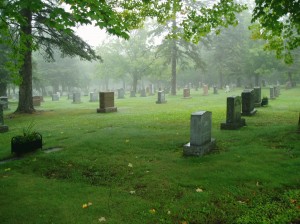 A few weeks ago I took Clara to the cemetery to feed the birds. After we tore up and doled out two loaves of Wonder Wheat Bread, we drove by a different pond with lily pads on the surface. Clara spotted a Blue Heron standing quietly in the reeds, and we pulled over to watch him. He slowly picked his way through the shallow water, lowering his head down at an angle now and then to spot a meal beneath the surface. How odd to see his long legs bend in the opposite direction as he stepped! Clara and I sat for at least ten minutes watching him, and twice he grabbed a small fish with his pointy beak and his long neck rhythmically convulsed as he swallowed.

I’m not sure I did a good job explaining everything to him, but I tried. I even told him that someday (hopefully many years in the future) Grandpa Michael and Grandma Julie would probably be buried right in this very cemetery. I told him that while our bodies would be there under our headstones, our spirits would not. I told him that our bodies were just temporary containers that hold who we really are inside, and that someday they would stop working. I tried to explain in terms a six year old could grasp, that when our bodies die, our souls and spirits live on – forever. I tried to explain that when we die here, it’s not so much an ending as a beginning – that it’s really like opening a door to our new (and more real) life. And that if we have trusted Jesus in this life, we will go to live with Him, and that it will be so wonderful, so fun, so beautiful, so exciting, so amazing, that there aren’t even words on this earth to describe how good it will be.

I knew I was falling short at describing death and heaven to Elijah. I prayed that something I said would take root in his little self.

We’ll go back to the cemetery soon. And the Knobbly Beaked Geese will run toward us with wings far outstretched and flapping, and we’ll empty our bags of bread and then search for a fishing Blue Heron. And then we’ll drive around and look at the names and dates on the grave markers, and I’ll pray that someday in God’s timing each of my grandchildren will fully understand how wide, long, high and deep is the love of Jesus for them. And how the knowledge of that love will change their lives here. And how the knowledge of that love will secure their lives there.

I pray that out of His glorious riches He may strengthen you with power through His Spirit in your inner being, so that Christ may dwell in your hearts through faith. And I pray that you, being rooted and established in love, may have power, together with all the saints, to grasp how wide and long and high and deep is the love of Christ, and to know this love that surpasses knowledge—that you may be filled to the measure of all the fullness of God.            Ephesians 3:16 – 19

I want to better understand this love for myself as well.