I woke at 3:16 a.m. and couldn’t get back to sleep, so I got up and watched an hour long program that always records on my DVR. It was about Paul McCusker and his journey from Baptist to Jesus People freak, to non-denominational, to Episcopalian, to Catholic. Paul is a prolific writer who is responsible for most of Focus on the Family’s Adventures in Odyssey and their Radio Theatre, programs my family loved for years. I ate a handful of Planter’s peanuts while I watched, and had some water. Then I went back to bed and fell asleep around 4:30 a.m.

I vividly dreamed that I was walking down the middle of a slightly hilly, but very straight residential street in a neighborhood I didn’t recognize. It was dusk, and everything had a silvery glow to it. The houses were mostly nice ramblers, set back off the street a bit, and each smallish yard had mature, beautiful, leafed-out trees in it. It was a very shady neighborhood. There were some lights on in the houses (of an odd, pinkish cast), but I didn’t see one person in any window or on the street, no traffic. Just me, walking in the middle.

As I walked, I noticed without alarm that water began to rise around me, and it didn’t spread to the houses. It was only the street that slowly became water-covered. The water was silvery from the early evening light. I don’t remember seeing stars or the moon, but there was enough light for me to look down into the water as it rose around me and lifted me off my feet, and see it was very clear, and I saw my body treading water. My legs and feet paddled slowly beneath me. I didn’t feel afraid, but I knew something was going on, and I kept treading water almost effortlessly.

In minutes the water that covered the street was roiling but not cresting. There were big surging swells that lifted me up and lowered me down, and the current was slow, and carried me down the grade of the street. I turned and looked at one side of the street, watching houses as I drifted past them. I never swam (I’m a good swimmer) but just remained upright with my head out of this rising river, treading water and being slowly carried downstream. I noticed the pinkish light coming from the windows of a house or two, and the silver light on the leaves of the trees. The water was deep and powerful. I raised my arm out of the water toward the houses and tried to speak something to them. It seemed important that I say something as I was being carried past. 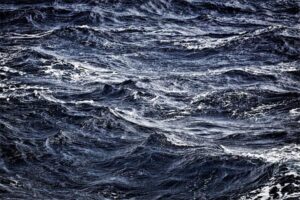 As sometimes happens in dreams, I had difficulty speaking. I tried very hard to get some words out, but who would have heard anyway? I was the only person I could see. Finally, with great effort I was able to say with real intention to each house, “Jesus!” I would raise my arm to each house as a pastor or priest does when he’s giving a blessing to his congregation at the end of a service, only my arm was stretched out exaggeratedly, and I called once loudly to each home, “Jesus!”

I had no idea what was happening, where everyone was, what neighborhood I found myself in, why only the street had become a rising river, and why I was being taken in this flood of water, but I wasn’t afraid. Perplexed, maybe, but I didn’t feel fear. And I knew I had to reach out to each house and pronounce the very best I could offer, which was Jesus.

I wonder what this dream means, aside from the obvious. Does anyone have a thought?