A few mornings ago I was driving home from seeing the baby geese and ducks at the cemetery. It was perfect weather — a deep blue sky with a few billowy clouds, a low dewpoint, and the temperature was about 52 degrees. There was enough of a breeze to need a sweater. I noticed that some of Northern Minnesota’s wildflowers are blooming. As I saw the purple and pink lupine, yellow buttercups and orange hawkweed on the sides of the roads, a memory wafted into my mind and I was instantly transported and filled with a longing ache for Michael that brought tears to my eyes.

Our wedding anniversary was June 28th, and for as many years as I can remember, we tried to go away for a weekend together to celebrate. When my mom was still alive, she would have Sharon, Carolyn and Sara stay at her house so Michael and I could have our time alone, and the girls always loved being with Grandma Sooter. She catered to them like nobody else, and it was a joy to know they would have such a good time while Michael and I headed north.

We usually drove up the North Shore of Lake Superior on Friday afternoon, and stayed in a cabin either in Grand Marais or Lutsen, and a couple of times on the Gunflint Trail close to the Canadian border. We returned on Sunday afternoon, anxious to see the girls but happy to have celebrated another year of God’s faithfulness to us.

June is when the spikey lupine begins to bloom on roadsides and in sweeping meadows almost everywhere you look. The delicate buttercups and invasive but pretty hawkweed flowers always mingle with the lupine, so a drive up the already spectacular shore of Lake Superior is made more breathtaking by the acres of color, waving in the wind. 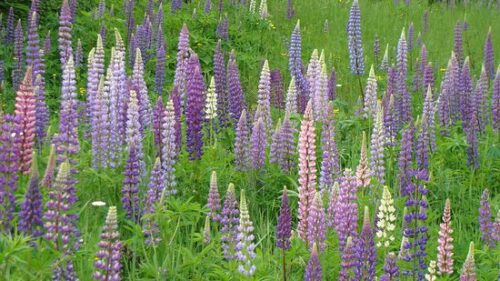 Seeing the June wildflowers blooming this week brought our anniversary trips back to me, and stirred something in me that is more than just missing Michael. Yes, the flowers helped me remember that he and I loved going down the Alpine Slide in Lutsen, racing each other and laughing, to see who could reach the bottom of the mountain first. How he and I sat in front of the huge fire in the lodge and read together, shoulders touching. How we hiked to the top of Carlton Peak, ate top sirloin steak at The Birch Terrace Supper Club in Grand Marais, canoed on Flour Lake while he fished and I read a book on Ireland, sat by the largest freshwater lake in the world and talked about the kids, the Lord, our future.

I loved him so much. And after five years, I still miss him. After remarrying eight months ago and feeling so grateful for Lloyd, my heart still catches when I think of Michael. Maybe it’s because we had so many years together. I can’t explain it, but I am not going to apologize for it either. For those who grieve a spouse and love someone new at the same time, I understand. 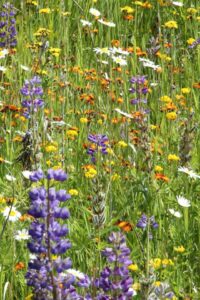 The lupines and the other wildflowers arrayed in their fine clothing called out to me as I drove this week, and even though I couldn’t hear their flower voices with my limited human ears, I caught the faint strain of their message deep inside me.

C.S. Lewis wrote of experiencing “the echo of a tune we have not heard, the scent of a flower we have not found, and receiving news from a country we have never yet visited.” The swaths of textured, living color were more than just reminders of times Michael and I had together. They seemed to bring me news of a country I have never yet visited, a land to which Michael has gone, a place (and a Person) I pine for every day.