We have some ivy in our front yard that grows at the base of our chimney. It grows extremely fast. During one of my sleepless nights, instead of counting my respirations backward starting from the number seventy-three, I laid there and mentally calculated how fast this ivy grows. I know how fast it grows because I tear it down every fall, right to the ground. Then every spring it (here you can cue the theme music to Jaws) begins its relentless climb up the chimney once again, and in a little less than six months it grows over three stories high, which is roughly between one and two inches per day.

The ivy looks very quaint and is reminiscent of old, stately British manors, and most people comment on it favorably. But I have heard too many horror stories about what ivy can do if left unchecked. It can weasel its way through the mortar between bricks, if given enough years to work at it. It can grow underneath siding panels and get into the walls of one’s house. It can grow up a chimney and then when it finds the top, grow down into the chimney and come peeking out into your living room one morning while you’re sitting on your couch having coffee and reading the paper and say, “Good morning little darling! Here I am after all these years!” Except I have a feeling that if ivy could talk it wouldn’t be so cheerful. I think it would chuckle malevolently and hiss in a deep voice, “Well, what do you know, while you weren’t paying any attention, I’ve finally gained entry to your lovely little home, and now you’re going to live to regret it for the rest of your sad and tortured life……HAHAHAHAHAAAA!”

Anyway, here’s what the ivy on our chimney looks like as of this writing: 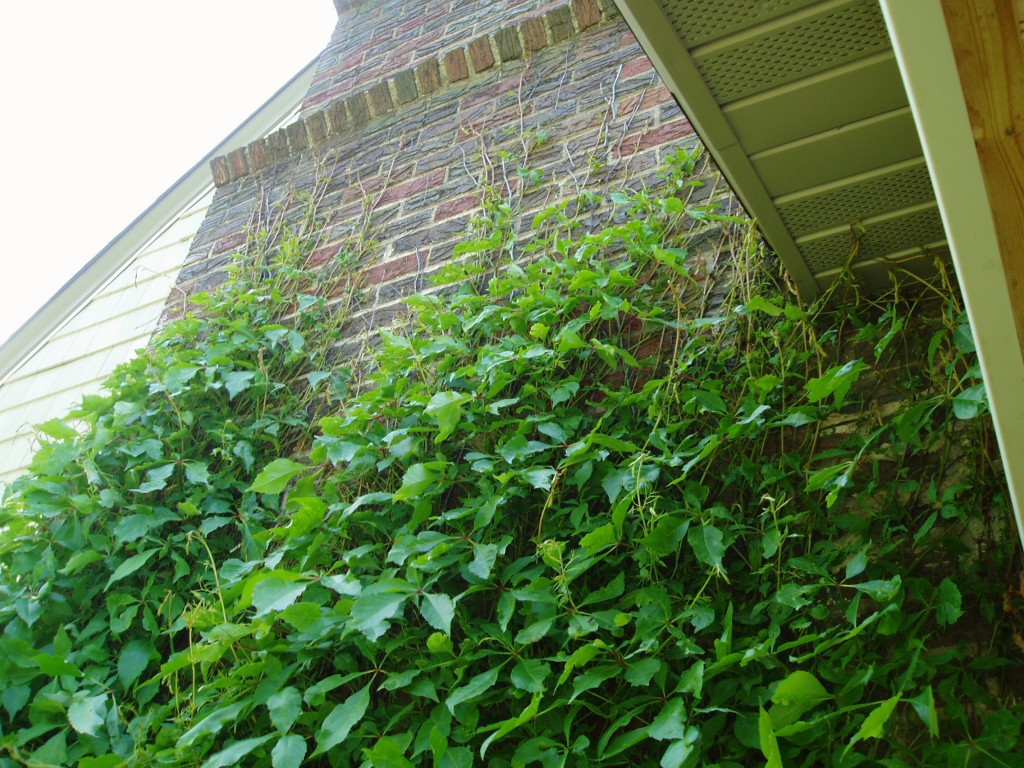 It’s almost halfway up. We still have all of July, August, September and October before I go outside one fine day and commence to bringing it to its knees. Or ankles. Or if I’m feeling powerful maybe I’ll bring this ivy to its toes. I’ll let you know in October.

Here’s another photo that sort of creeps me out a little bit. These photos enlarge if you click on them, so you’ll be able to clearly see how our quaint Mr. Ivy isn’t content to keep to the path and stay on the chimney. No. When he thinks (notice I’ve given him a male identity now – as I’m typing the threat has grown more pronounced in my mind and our ivy is no longer an it but a mister) I’m not looking, he starts growing toward the front porch, and slowly wends his way to the wooden porch ceiling: 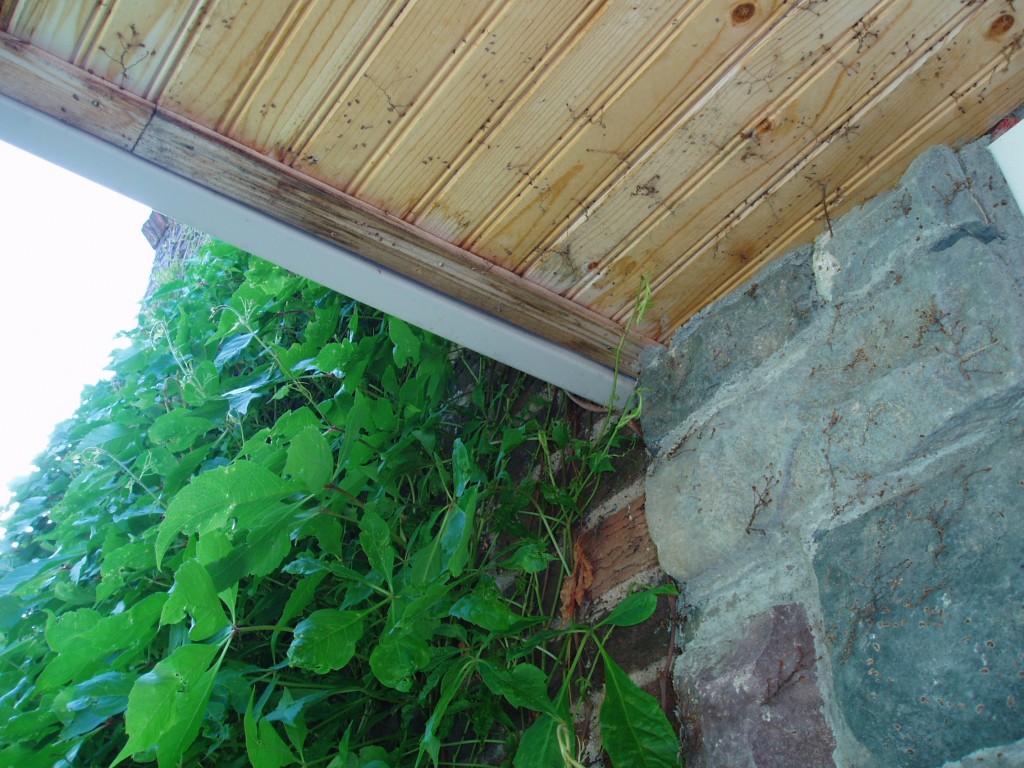 Perhaps you can also see the remnants of Mr. Ivy’s attempts, years ago, to infiltrate the whole porch ceiling. This did not happen on my watch, but when the previous owners were living here. Look closely and you can see the little ivy suction cups left behind on the stone work and the ceiling. Mr. Ivy might have nothing to say about it when I decide each fall that he’s done with his creeping, but he certainly tries to leave enough of himself behind so that I don’t ever forget he’s been here.

Now, here’s a photo I took at the end of autumn, and you can see that the ivy grew all the way up to the top of the three+ story chimney, and then changed into beautiful breathtaking colors: 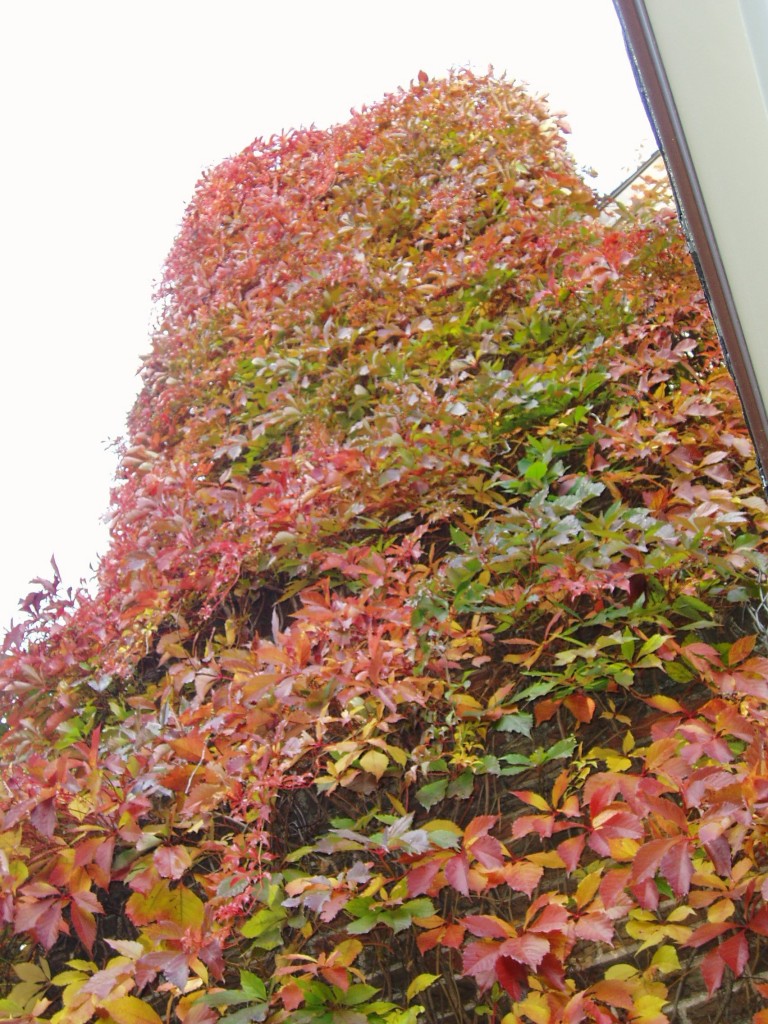 That’s why I don’t pull him out by the roots completely. Because kept in check, the ivy is lovely and delightful to look at, and adds charm to the house. But as soon as the last leaf falls and the Minnesota air turns chill enough to hint of coming snow flakes, these vines are coming down.

(I think a devotional could be done on this subject, likening ivy to the destructive habits and strongholds we allow in our lives. Sometimes we think those little dalliances are fairly innocuous and that we’ll just take care of them when they get a little out of hand. Sometimes sin even looks pretty and is pleasing to the eye. Where the analogy dies, however, is that with sin, we’re not supposed to just pull it down to the ground when it starts to take over our lives. We’re supposed to completely pull it out by the roots and be absolutely ruthless with it.)

Not only do I not want the ivy making its way under the siding, across the porch toward our front door, or crumbling the chimney mortar, but when I pull it down each year I tell myself I’m actively working to prevent our house from eventually looking like this: 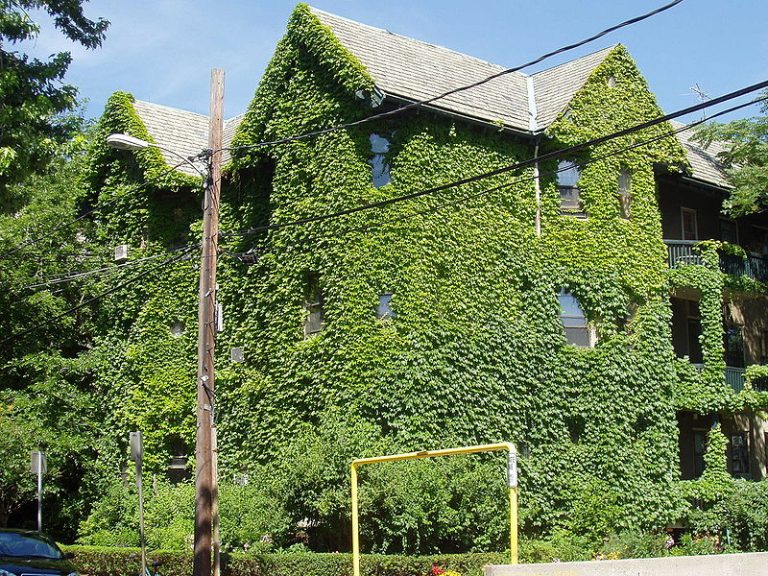 Perhaps I should be so diligent in other areas of my life.