In the blink of an eye

Yesterday I drove about 45 minutes south to pick up three grandchildren from their church summer camp. They’ve been going for years and look forward to it so much. It was fun to listen to the three of them (and a friend who went with them) chatter in the back seat about their adventures there. It got me thinking once again about how quickly all my grands have grown.

Clara (below) was my first grandchild, and she is almost six feet tall now, and is sixteen years old. I know this sounds like a trite thing for a grandmother to say, but I almost can’t handle this. I want to slow down time and stretch out the moments, but of course that never happens. Clara has had artistic talent since she was a toddler, and wants to someday be an animator. Her head is always tilted toward her portfolio and the thousands of truly astounding drawings she has done over the past years. She is a deep thinker, loves to watch favorite movies over and over, and gets along surprisingly well with her slightly younger brother. Clara and I have had many fun times together — WWG days, memorizing Bible verses together, and reading books out loud. When she was barely out of kindergarten she recorded the message on my voicemail, and to this day it brings a tear to hear that tiny voice say, “You’ve reached Grandma and Grandpa’s house. Please leave a message.” I will never, ever change it. Clara warms my heart. 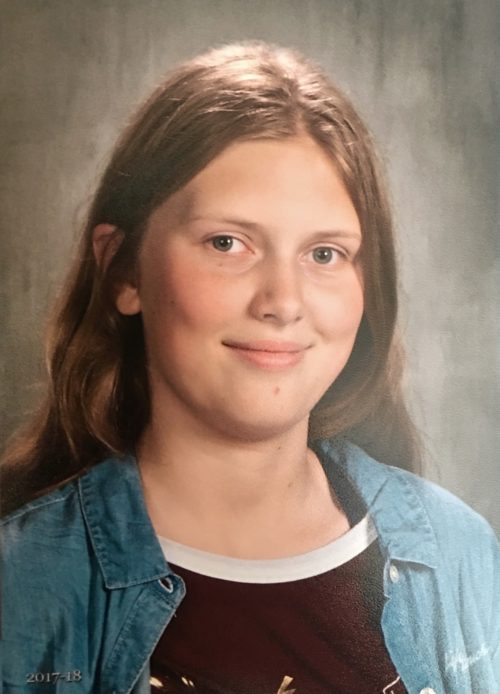 Elijah (below) is sixteen months younger than Clara, and when they were little, people used to think they were twins. He has grown at least five inches in the last five months, and is pushing six feet himself, if he hasn’t already reached that mark last night while he slept. He turned fifteen years old yesterday. His smile lights up his whole face. Elijah excels in math and science, and has plans for big finance someday. He can draw too. He is a delight to talk to because he’s such a good conversationalist. How many fifteen year olds can we say that about? He’s a bit of a joker and I’ve heard he can be the class clown. Elijah also adores his youngest sister Miriam. They have a very special relationship, and he’s patient and tender with her. When I picked him up from church camp yesterday, one of the first things he said from the back seat was, “I missed Miri!” She apparently wanted to sit with him a long time after he got home, and her head was planted with many brotherly kisses. Elijah makes me smile. 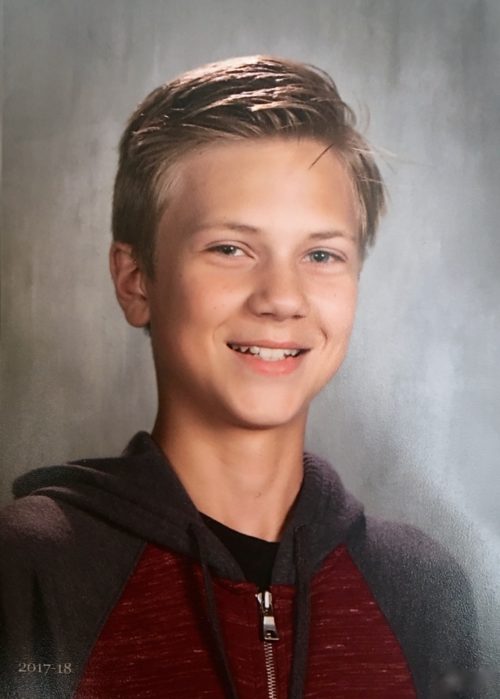 Vivienne (below) will be thirteen in a few months and like her siblings, she is tall and lanky and all legs. She has been an observer since she was less than a year old. I remember watching her study the tip of a pencil eraser for a long period of time, pore over the science books I keep on the grandchildren’s bookshelves, and draw detailed dragons with hundreds of scales. When she was about seven, I picked her up from school one afternoon to give her a ride home. She has always been reserved and deep in her own thoughts, but from the silence in the back seat she piped up in her very feminine voice and asked, “Grandma, have you ever considered whether or not infinity has mass?” Uh, no. I took a stab and said I didn’t think it did, and she cheerfully agreed that it probably didn’t. She has always been more interested in facts than fancy. While other little girls chatter about nail polish and boys, Vivie ponders things like black holes in the universe, and the intriguing fact that snails can breathe through their skin. I look forward to seeing what kinds of things she accomplishes with that mind of hers. Vivie delights me. 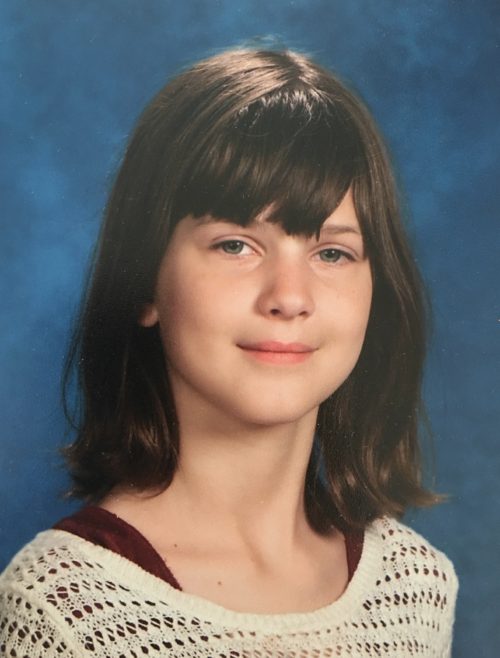 Audrey (below) is 10 1/2 and has burned brightly since she was an infant. Her energy, laugh, vibrant expressions, friendliness and enthusiasm have heartened me countless times. She can draw too. Audrey is an includer — she loves her friends and wants to get to know everyone and draw them in. She is muscular and athletic and has been able to do impressive things the rest of us would be crippled by. She’s affectionate and open-hearted. She laughs easily and feels things deeply, and I believe her passionate temperament will be a magnetic force for God’s kingdom someday. She is others-focused and hangs her head out of the car when I pick her up from school, waving and calling out the names of school friends, boys and girls alike. As a toddler she called Michael and me “Bocka and Backa,” and it was a day of mourning when she grew out of that and started calling us Grandpa and Grandma. 🙂 Audrey is curious and loves animals, and created an adventure in her home years ago when she found a baby Canada goose near a pond in their neighborhood and decided he would make a good family pet. (He was successfully returned to his frantically honking parents.) Audrey brings me such happiness. 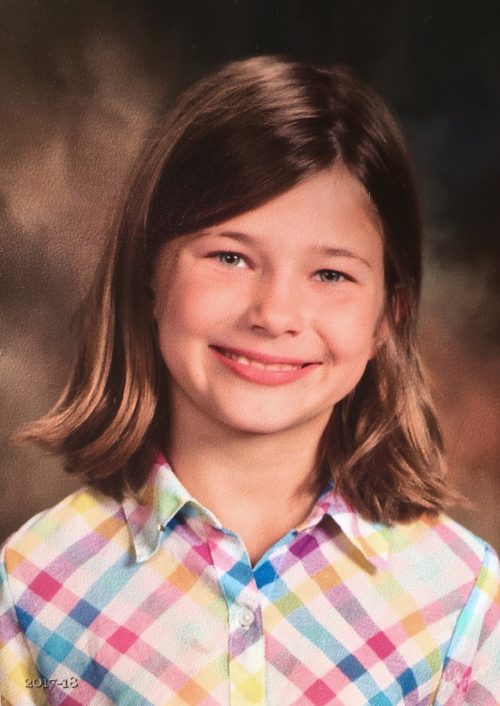 Miriam is 3 1/2 and is one of the most cheerful children I’ve ever known. She is content and talkative, loves her older siblings (Cwawa, Hijah, Veevie and Audwie), and is generally adored by all people on the earth. She associates two main things with me: scrambled eggs and fingernail clippers, asking for the former as soon as she sets foot in my house, and signalling it’s time for the latter by finding them in my bedroom drawer and planting herself in my lap and sticking out her hand. “Cwick, cwick!” she says as I cut her nails. She talks well and a lot for a child her age. Miri (pronounced MEER-y) loves her brother Elijah so much she runs to him when he comes home from school and reaches up for him to pick her up. She also had a very special relationship with her beloved great-grandmother Mary Lou, who recently went to heaven. Miri has so much love in her heart for such a little girl. You can actually feel that love when you’re with her, and it’s one of the most wonderful things I’ve ever known. 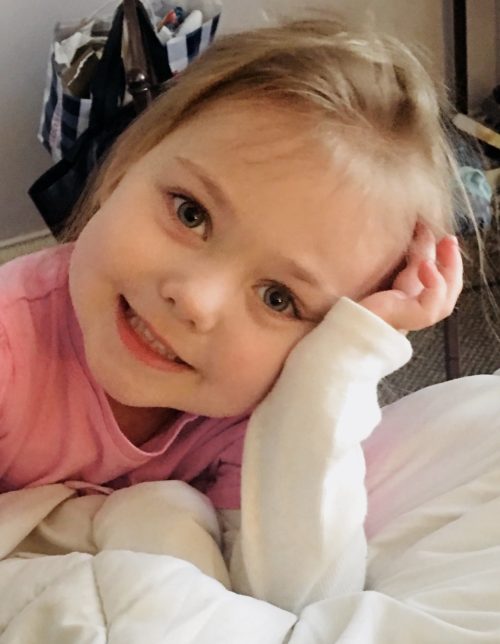 I was forty-four when I became a grandma for the first time. I’ll be sixty-one soon, and all these beautiful children have flown into my life and grown up around me in the blink of an eye. I can’t thank their parents (Jeremy and Carolyn) enough. I can’t thank God enough for His goodness to me through them. But I will make it my life’s goal to say thank you, thank you, thank you, for them, until the day I die.