It’s been a big adjustment visiting Michael only two times a week now. Whether or not my visiting less frequently is helping him is still something we don’t know. Monday and Tuesday I didn’t drive up to see him (if you’ve never taken the virtual tour of the veterans home, click here) and he didn’t have particularly good days, and yesterday I spent the day with him and he was fairly peaceful.

Because the Lewy Body Dementia episodes of intense agitation, pacing and delusion have increased, his doctor visited Michael on Wednesday and prescribed Exelon for him. He will wear a patch and we are praying it helps him. Will you join us in prayer for that?

When I arrived yesterday morning after a beautiful fall drive up the north shore of Lake Superior, Michael had just finished breakfast. Cindy, the cook in the Birch household where Michael is being cared for, spoils him rotten and it makes me cry to just think of her. She is such a blessing with the way she teases him, makes sure he gets his glass of Kombucha in the mornings, makes six sausage links for him along with his eggs, and dotes on him like a mother.

After breakfast, wonderful, encouraging Laurie, who has worked at the veterans home for over twenty years, came to get Michael for physical therapy. Yesterday he went twenty minutes on the NuStep while Laurie played 1970s music and set out some of her own baked goods for the residents she helps each day.

Then we saw Michael’s doctor as mentioned above. Next, I wheeled Michael to the beautiful sun room (you can see all the different rooms on the virtual tour link above) where we sat and watched the many birds in the huge aviary. The low, golden autumn sun poured in through the windows, and we watched baby Society Finches practice their first fluttering flights. We listened in delight as the Weaver Bird warbled. We saw the Gouldian Finches poke their multi-colored heads out of the nest while they brooded their clutch. I took some clippers and cut Michael’s finger nails while we sat with the birds. They do nail care there, but Michael’s nails have always grown quickly and I had an ulterior motive in doing it myself. Blade Time. What is Blade Time, you ask? Well, Michael’s nails always feel like tiny blades after I clip them, and for thirty-three years he has lovingly scratched my lower legs and ankles with his “blades” while we sit on the couch and I slip into a semi-conscious state. It feels so relaxing. So after saying goodbye to the birds we went to the Great Room and I helped him transfer from his wheelchair to the couch. He sat on one end, I laid down toward the other end and put my feet in his lap, and there was Blade Time.

Soon we headed back to his neck of the woods and had a snack. Fresh baked sour cream/lemon cookies (cookies are baked fresh every single day in each of the four households in the building) and milk for Michael, and a cheddar cheese stick and some watermelon for me. The refrigerators are kept stocked with all kinds of food at all times (sandwiches, juice, fruit, cheese, shakes, yogurt, ice cream, etc.) because they want the men to feel at home and help themselves. This is in addition to the three huge and quite yummy meals they serve.

Michael and I sat at a table in the dining room and “visited” for a while. I use the word loosely because he isn’t able to say much that I understand, but holding hands and whispering “I love you” a dozen times is working for us. While we were waiting for lunch to be served, Michael leaned forward with an earnest look on his face and said just loud enough for me to hear, “I’m really happy with your looks.” Hahaha! That made me laugh and he chuckled right along with me. Just the way he worded it. So I leaned toward him and said, “Well, I’m happy with your looks too!” We grinned at each other and I thank God for a sweet memory made yesterday.

After a good lunch (BBQ ribs, red potatoes, vegetables, oranges, milk, ice cream sandwiches) Michael wanted to take a little nap. So once again I wheeled him to his room and helped him on to the bed, and we squeeeezed together and were able to cuddle for a while. We listened to soft, soothing piano hymns on his little CD player and he feel asleep quickly. When he woke up after about 40 minutes, I reached for my iPhone and took this picture of us: 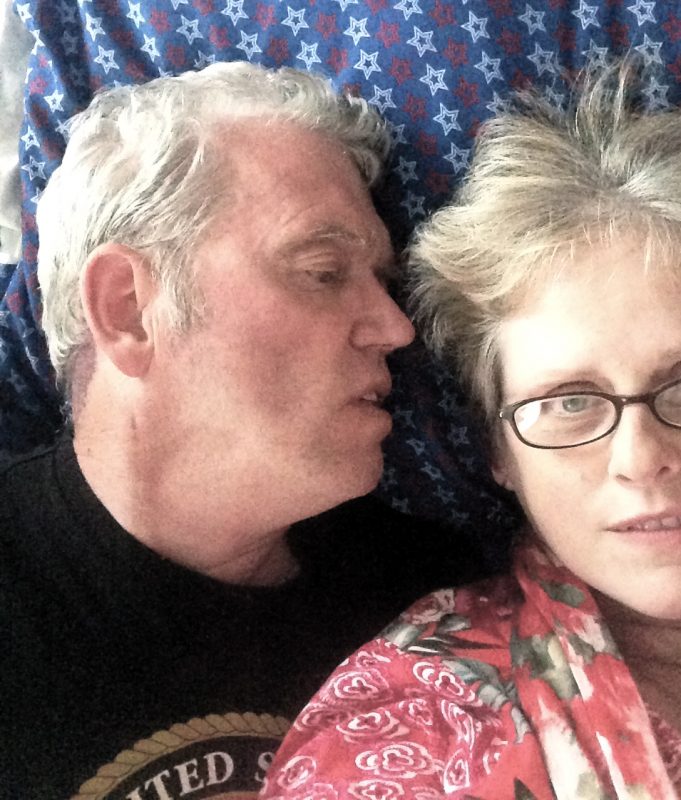 After Michael’s nap we went to the Birch living room and watched a weird movie with some of the other residents, an old black and white film with a confused blonde woman who seemed to be wandering around looking dramatic and having amnesia.

What I haven’t mentioned about each time I visit are the many interactions with the staff that occur. Cheerful, respectful aides help him to the bathroom, nurses hunt us down wherever we are in the building to give Michael his medication, recreation staff take the men on outings and plan activities to help them enjoy this home away from home as much as possible. The day before yesterday Michael and a few other men were taken on a drive to see the brilliant fall colors in our area. Here’s what many of our trees are looking like: 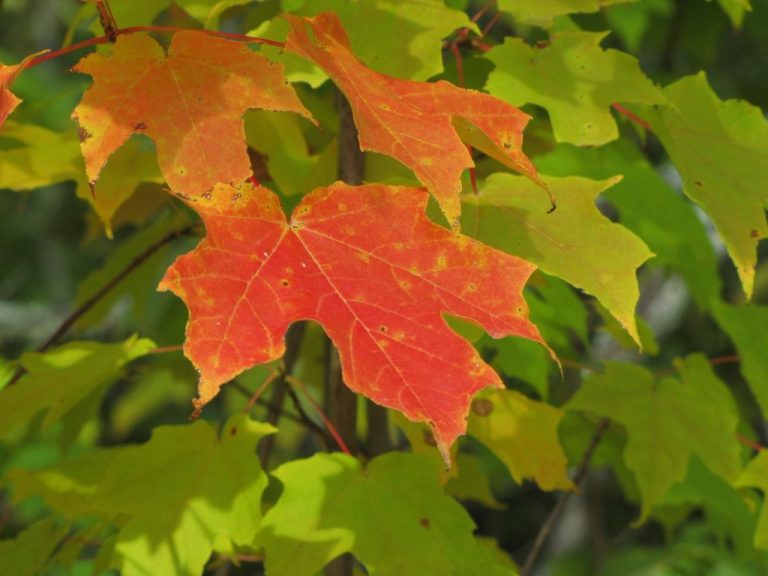 In just the past week Michael has played (and won actual money at) bingo, participated in (wheelchair) yoga, gone leaf watching, had a picnic, enjoyed some excellent live music performed by a local group in the facility’s Great Room, gone to chapel twice, and done some painting. There are at least three things each day, and even though to younger folks these activities might seem like nothing much, they help the time pass more pleasantly for the residents and I am so grateful. I am always so happy when I call to speak to Michael and nurses Donna or Tim tell me, “Oh, Michael’s not here, he’s having lunch with a group of the guys in town” or “he’s trout fishing on the pontoon boat today” or “he’ll be back soon, he’s out on a scenic drive and ice cream run.”

In spite of everything though, the beautiful facility, the dedicated and loving staff, the many generous activities tailored for veterans, and the very skilled nursing care, it’s not home. I don’t know if Michael or I will ever get used to being apart like this. That is the thought that seems to randomly come and violently tear at the fabric of gratefulness I’m trying to weave each day. I’m still writing in my gratitude journal, and it’s filled with things like: #3942 – Michael said his spa bath was “awesome” today, #3961 – Aide Amanda’s ready, cheerful help for Michael, #3987 – the breathtaking colors which remind me of your faithfulness and power, Lord, and so on.

When the grief comes, I’m trying to just be. The sadness envelops me and I often weep, but I sit and put my mind on the Lord and know He is there with me. He is well-acquainted with grief and sorrow.

Yesterday one of the veterans home employees named Denise came to visit briefly with Michael and me and she said the Lord had put something in her heart as she was driving to work. It was the account of John the Baptist, who was conceived, dedicated and raised to be the mighty prophet who pointed the way to Jesus after 400 years of silence from the Old Testament prophets of God. John did everything right — his whole life was given to preparing himself and others to meet the soon coming Messiah. He minimized his own importance, confronted the hypocritical Pharisees, baptized Jesus, and spoke against the corruption of Herod, resulting in his death by beheading.

Before John died, he wondered why he was locked away in a prison, and sent his men to ask of Jesus, “Are you really Him?” Because if Jesus really was the Son of God, why was John in a cell after serving Him so faithfully his entire life? Why didn’t Jesus do something about that? If you know the story, you know that Jesus didn’t give John the answer he was hoping for, didn’t supernaturally swing that prison door open for John and set him free. No. Jesus set John free in another way.

After Denise shared all this with Michael, she looked at him with tears in her eyes, put her hand on his shoulder and said, “Michael, you feel like your body is a prison and maybe wonder why Jesus isn’t setting you free from it. But even in this state, you are great for Him, and He is good and can be trusted with your life.”

I don’t know about tomorrow, but today this is enough to sustain us.