The precious picture below is of Michael and one of our grandsons, Elijah. It was taken by our daughter Sharon about ten months before Michael died.

One year ago today, we had all gathered and prayed, and were waiting to learn what was going to happen with Michael. He was in the hospital, largely unresponsive, and what follows are my thoughts from that day, the third of his seven day journey to heaven. 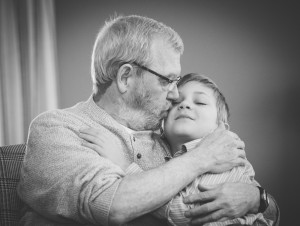 On Wednesday when I arrived at the hospital, once again the nurses reported that there hadn’t been any notable change in Michael’s condition overnight.

Due to the high risk of his lungs filling up, his bed had to be kept at a 45 degree angle, so even though he was turned on alternate sides and changed every two hours, he never really got to lay down flat.

His eyes were closed, his left hand was gripping and opening, so the rolled washcloth was still needed, and I could see that his face looked more slack than it had the day before. He kept his mouth open more. 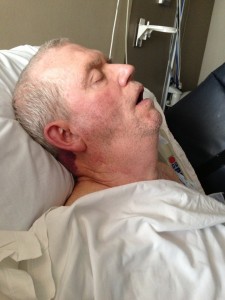 He was still coughing occasionally and yawning at least twice an hour. He was able to chew and swallow the small ice chips we were giving him, and as anyone would do who was waiting for good news, we rejoiced at these things as if they were little arrows of proof pointing to his recovery, or at least to his coming out of unconsciousness. “He’s coughing! He groaned a little! Look, he can still chew the ice and swallow it!”

I think the most encouraging thing that happened on Wednesday was around lunchtime when several of us were gathered in Michael’s hospital room. Michael seemed a little closer to the surface than he had been earlier in the day, so I hugged him and kissed him, talked to him and told him about all the people there who loved him so much. I gently opened one of his eyes with my thumb and forefinger, and right at that moment our son-in-law Jeremy walked from one part of the room to another. Michael’s eye followed Jeremy’s movement very deliberately and accurately and we were thrilled. Of course then I opened Michael’s eye and got down close to him so he could see me and I whispered happily, “Hi Michael! We’re all here! It’s me! You’re in the hospital and they’re taking great care of you, and we’re waiting with you until you wake up a little more. We love you and you are going to be just fine!” And because we were certain he had seen with that eye, and we believed he could still hear us even though he couldn’t yet respond, we all quietly and lovingly told him how crazy we were about him, all throughout the day. All the way until dark, those of us there sang to him, prayed for him, let him rest in quiet, massaged his limbs, and kissed him.

Michael’s wonderful sister and only sibling Patty had been there every day, waiting with me and speaking so compassionately to Michael. I have never heard my husband utter one negative thing about his beloved sister the whole 34 years we were together. And she didn’t hesitate to show her devotion to him. What a beautiful thing! After Patty went home late Wednesday afternoon, her husband Joe came to the hospital, and for quite a while it was just Michael, Joe and me together. Joe saw Michael squeeze my hand, noticed things he felt were hopeful, and he told me, and later Patty, that he felt the next day Michael would be waking up. That sounded good to me, after all it had now been almost 60 hours since Michael’s seizure. If this was Todd’s Paralysis, we were already past the common 48 hour waking point and moving toward the 72 hour point, which seemed ominous to me.

Our neurologist Dr. McKee makes his rounds at night, not in the morning like most doctors do, and since I had to go home and make dinner for our Fosters by 5:00, I missed his visit. He called me at home that night after he had seen Michael, and said that when he had gotten close to Michael’s face and yelled his name, he opened his eyes briefly. That sounded encouraging, but as our conversation progressed, for the first time I thought I detected more caution, less optimism in Dr. McKee’s voice than I had the days before. When I mentioned that Michael had followed Jeremy with his eye and had squeezed my hand, Dr. McKee hesitated very briefly and said, “Well, that’s good. I do think it’s time to order another CAT scan for tomorrow morning, however.” I didn’t know then what he would be looking for in this second scan, what he expected to find, but I had a feeling Todd’s Paralysis was no longer what he thought was going on with my husband. I wanted to know as much as possible, so of course I consented for the scan.

After cleaning up after dinner I got into my nightgown, let the dogs out one last time for the night, and sat in silence in our room on Michael’s and my comfortable king-sized bed. It felt like tomorrow, Thursday, would be a momentous day, due to the second scan scheduled. I contacted our daughters to let them know about Dr. McKee’s call, and in spite of how tenuous things were seeming, we knew we were all drawing close together in love, praying for Michael, and trusting God for whatever would come.

I turned out the lamp on my nightstand, turned over on my side there in the dark, and listened to the deep doggy breathing of Edith and Millie who were curled in canine circles on Michael’s side of the bed.

Michael’s side of the bed.

For a brief moment or two, I allowed my mind to go to the sorrowful place of wondering if Michael would ever lay his eyes, his body, on that bed again.

The pain was too deep and the wailing too loud. When the spell of fear and grief eventually faded, I asked God for sleep, and I begged Him to touch my Michael, the light of my life, the man of my dreams, and to be there with him all night in his hospital room, so that Michael could feel He was there.