All summer long we haven’t seen a fruit fly, until this week. I try to be careful about our fruit because I know all it takes is one bunch of bananas with the right hitchhikers on them and in no time those little brown flies will be taking over the kitchen. 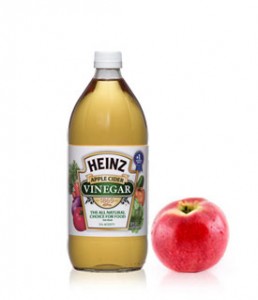 I saw the first fruit fly a couple of days ago, and immediately wrapped up all the fruit. Some of it stayed out and some went in the fridge, but all of it was washed and/or wrapped. The fruit bowl was washed and dried before returning the (wrapped) fruit to it.

I was able to swat a fly or two that first day, but yesterday I saw at least five buzzing around. Sara noticed that I had my head down on the counter weeping (well, not quite), and she trotted off to the computer for a few minutes, then returned with a remedy she’d found.

“Put a small glass or bowl of apple cider vinegar out on the counter,” she instructed, “and add a few drops of dishwashing liquid to it. It should attract the flies and kill them.”

I am sorry that I’m admitting to killing flies in such a cruel way, for those of you who ponder such things. I would have preferred their quick demises with a merciful swat, but that wasn’t working for me. I did what Sara suggested, and within two minutes the first fly had succumbed.

Michael and I went grocery shopping and when we returned an hour and a half later, there were at least 10 fruit flies at the bottom of the little bowl with apple cider vinegar and Dawn dishwashing liquid in it.

I put out a fresh batch last night before I went to bed and lo, this morning there are none in the dish. The fruit flies are gone.

Perhaps all of you already know this information. I might be decades behind in the household hints department and 8 out of 10 homes in America (and England and Australia and Canada and Switzerland and Ireland) have already been employing this method for battling fruit flies for years now.

But just in case you have a fruit fly or two and you hadn’t heard of this strategy, I thought I would pass it on. There’s a teeny part of me that feels bad for the kind of end the flies are meeting in my home, but oh well.

How do you deal with fruit flies?