A Conversation While Sleeping

A few nights ago Michael and I apparently had a short conversation while I was sleeping. He told me the next morning what had happened and I couldn’t remember one bit of it, not even the shadow of a dream I might have had. 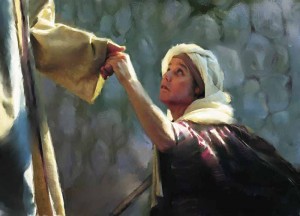 Michael said that in the middle of the night he woke up to me next to him saying whispery and plaintively (he didn’t use those adjectives, but he did an impression of me and they apply), “Jesus…. Jeeesus…. Jeeesus…. Jesus.” He saw that I was sound asleep as I was quietly pleading the Savior’s name over and over.

Instead of waking me up and asking me to turn over because I was having a dream (which is what I would probably have done to him), he listened for a while. Then, when I paused, Michael said to me slowly and soothingly (and he demonstrated how he spoke), “Just call upon His name.”

“I said the name of Jesus over and over in a wispy, earnest voice?” I asked, a bit incredulous.

“And you listened for a while and then answered me?”

“Then what happened?” I asked him.

“Nothing. You stopped and I think I went back to sleep.”

Being married to a Parkinson’s patient with profound speech difficulties isn’t always easy. But evidently the Lord is helping us to have short but very meaningful conversations in the middle of the night.

Blessings on you all today,