This wonderful little boy is my grandson Elijah. He’s the second child and only son of my middle daughter Carolyn and her husband Jeremy. Elijah is five years old and is in Kindergarten this year. 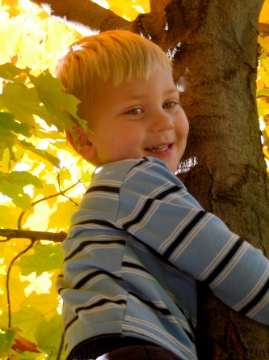 Now, I know what I’m about to write will sound like a typical obnoxious, boasting grandmother, but I promise you it’s all true: there is nothing not to like about E-boy.

He is tender hearted. He is compassionate and gentle with his little sisters. How many five year-old boys would truly rejoice over a baby sister’s first word (“hot!”)?  Elijah leans close to baby Audrey when she tries out new words, smiles hugely and encourages her, and probably makes her feel like her big brother thinks she’s really amazing.

He loves to draw and create and I have never heard him say “I’m bored”. Elijah makes great things out of Legos that really do look like what he says they are: ships, dinosaurs, robots, swords, dragons, and castles with towers. He and his older sister Clara often sit at Grandpa and Grandma’s kitchen table with blank pieces of paper and crayons, and they’re happy and content to draw for a long time, and to look up occasionally and watch the birds that come to the feeder outside the window. There’s a peaceful calmness about Elijah that isn’t often seen in little boys his age.

Our E-boy is also funny and silly, quick to laugh and to make others laugh. He’s also really good at cleaning up when it’s time to put the toys away. He does it quickly and without complaining.

When I pick Elijah up at his house to bring him back to spend the night at Grandpa and Grandma’s, he runs out of his front door with glee and throws himself at me, he’s so excited for our time together.

I asked Elijah’s daddy to give me a couple of words he thought best described his son, and he said, “Willing and brave.” I see these traits in Elijah, and pray that God weaves them into the very fiber of his character as he grows. Elijah’s name means The LORD is my God, and as he learns to walk with Jesus throughout his life, I believe God will help him to be a willing and brave man in his generation.

I told my grandchildren that when they look at the moon and stars in the night sky, to think thoughts of the fun times they’ve had and will have with their grandparents. I remind them that when they see the moon, Grandma can see the same moon at the same time, even though we’re apart. I tell them that when I see the moon, I send my love winging its way to them, and am thinking of them and praying for them. Elijah listened intently to this and later told me sweetly, “Grandma when I see the moon, I think of you and all the love there is at your house.” Even as I type this I have tears.

Oh, such a tender and beloved boy he is. And even at this young age, he’s a boy of substance, willingness and courage. He’s a blessing in every sense of the word to his family, and one of God’s most extravagant gifts to me. I’m very proud to introduce you to my grandson Elijah David.