Paying attention to what month of the year it was never meant much to me when I was growing up in Southern California. The sunshine and warmth blended from one season to another, with a little rain in between, and no one seemed weather obsessed like they are here in Minnesota.

When I moved to Minnesota in 1981 I noticed right off that everyone talked about the weather. All the time. The grocery store cashier taking my money would ask, “Still cold out there?” The neighbor spying us through the backyard fence would call in his Minnesota-very-much-like-Canada accent, “Nice day, eh?”  The stranger walking his dog past our house would wave and comment, “The weatherman says it’s going to warm up tomorrow!”

I guess part of all the weather talk here is that our weather can be dangerous. When the temperature plummets to thirty degrees below zero and the winds are a-blowin’, human skin can be frostbitten in seconds. My husband Michael used to go winter camping (yes, it’s puzzling to me too) and about ten years ago he was in far northern Minnesota ice fishing and camping with good friends. They know how to dress well for this, and there are even sleeping bags made for below zero sleeping, so no matter how much I questioned the trip, no one was deterred. Piece of cake.

Well sometime during the night my husband’s thumb must have inadvertently peeked out of his sleeping bag, because when he awoke the next morning, it was grey. And painful. Michael did all the things you’re supposed to do, and kept an eye on it. When he returned from his winter camping adventure and showed me his grey thumb I was aghast. In a couple of days it had darkened to a deep charcoal color, from the top knuckle up. And the tissue on the tip of his thumb began to feel a bit stiff, not soft and yielding like normal flesh. He went to the doctor who told him yes indeed, he had suffered frostbite and the only thing to do now was to hope and pray the thumb could be saved.  In a few more days the tip of Michael’s thumb turned completely black, and the tissue felt like cardboard. You could tap on it and get a small sharp sound (“tick-tick” – *shudder*). Michael endured this stoically, but I made up for the both of us by being fraught with obsessive concern about the tip of his thumb eventually falling off. About a week after the death of the tissue on the tip of his thumb, it began to peel off. Thick portions of it. Not just like thin wispy layers of dried skin, but relatively thick slabs of black, stiff, dead flesh began to pull away from behind the nail, and underneath was new, pink, very tender skin. And what was strange was that you could see fingerprints on this new skin underneath the peeling black stuff. The old fingerprints had died and turned black, but the new skin grew the same prints. At least I’m assuming they’re the same prints. So Michael’s thumb remains intact and properly hued, but it has been and apparently always will be very susceptible to freezing again. He has to protect this thumb carefully when he goes out in the cold.

So, I’ve shared all these unpleasant details to tell you why it can feel downright dangerous in Minnesota at times. And to me, January is the worst. It’s just a beastly month. January is the coldest month here, and way below zero temperatures are the norm. Two nights ago it was fourteen below zero, with windchill readings close to forty below. With conditions like this for the past twenty-eight winters here, I have become weather-obsessed like the rest of them.

Every single year I count the days until January passes into February, and then I breathe a sigh of relief, knowing that the nights of thirty below are probably over for another year. As I say good riddance to the first month on the calendar, the days begin to get longer, and as the temps slowly climb above zero, I actually feel a bit hopeful after a long, deep, dark, bitter January. A dangerous January.

Sometime soon I will write a post about my first spring in Northern Minnesota, after having endured my first winter. I had a very embarrassing experience due to my newness to American Siberia and my naivete about cold weather in general. I won’t divulge it all here, but let’s just say it involved being noticed by many people in the downtown area of our city, due to improper dress.

So I should come to my point and here it is: January feels dangerous to me now. It feels like life is tenuous and even in limbo for thirty-one days. It feels like we’re being stalked by something malevolent. It feels like it’s a time for us to tip-toe, hold our breath, pray our furnaces keep functioning, and wait until February comes so we can all relax again and enjoy our lives.

I have joined the ranks of the weather-obsessed and do the exact same things I found so perplexing in others years ago. I check the weather online a few times a day, looking for news of a slight warm-up. If the forecast says tomorrow will be above zero, my pulse quickens and I call to Michael in the other room and say, “It’s going to be ten degrees tomorrow!”, and he’ll say, “Aaahh, that’ll feel nice.”  I also meet him at the back door and say worriedly as he takes off his coat and boots, “How is it out there?” And I take pictures of menacing four-foot icicles that hang off the roof right outside our master bedroom window, so I can put them on my blog to show you how I’m being tortured every day by this sinister thing that is a Minnesota January. 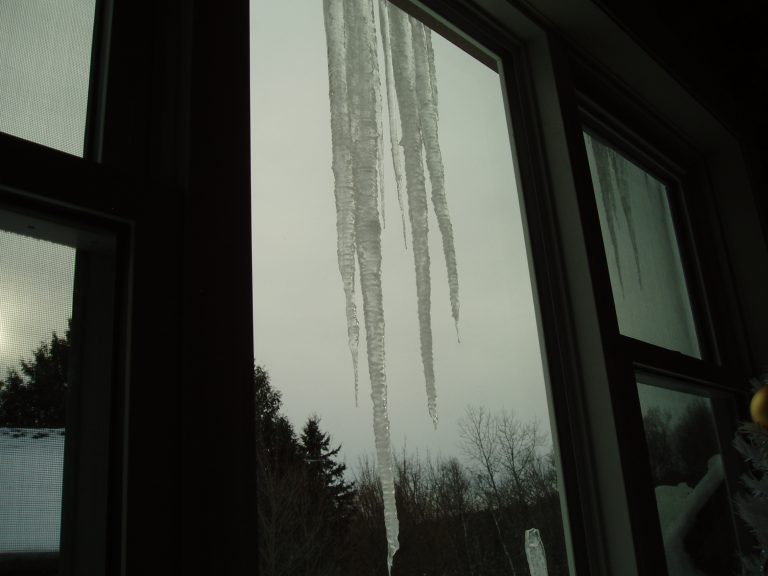 I didn’t even try to get a shot of the ones on the back of the house, because I would have had to don my many layers and it would have seemed…well, dangerous.  The icicles hanging from the back of the house are as big around as a child’s waist. (Note: the presence of icicles on one’s roof signals another problem entirely – heat loss – but that is another story and it would be too traumatic to go there today).

As I was leaving the other day to run an errand, I didn’t like the look of some of these potential impalers hanging from the front roof, ready to fall when an unsuspecting person walked near. So I did something that would have made my dad laugh. He was a basketball coach, so maybe that’s why I immediately thought of grabbing a basketball and, while the van was warming up (because it’s dangerous to not warm your vehicle up in this dangerous weather), I repeatedly threw the ball as high as I could (we have a three-story house so the roof is quite high in places) to knock those huge knives of ice down. At times, in order for the ball to reach some of the higher icicles, I had to resort to the dorky, squatting, underhanded throw. I’m sure it was a nice bit of entertainment for the neighbors. How often do you think they’ve peered out their windows before to see a woman shooting a basketball over and over again in sub-zero weather, knocking colossal icicles down from her roof?

I can just hear them now as they imperceptibly part their curtains half an inch to watch… “Edgar! This neighborhood is getting dangerous. I think it’s time we move…”

Happy New Year and rabbit to you all,