In a few weeks, for the second time in my life, I’m getting braces on my teeth. It’s hard to believe that I need orthodontia at 58 years old, but using my CPAP machine has shifted my teeth in the twelve months I’ve had it, and if something isn’t done, my teeth will keep moving into a nice cantilever and look like they did when I was eleven. I’m trying to be matter-of-fact about it, and be thankful that something can be done, but it’s a little disconcerting to be honest.

Almost immediately after Michael died, I started not breathing about 100 times per night, and I’d wake up gasping with my heart pounding so hard I could feel it beating in my upper arms. My toes and fingertips would tingle from lack of oxygen. I suspected sleep apnea but was surprised by that since I’ve never been a loud snorer or had issues with sleep. I wondered if it was stress. I went to the doctor, then had an overnight sleep study where I learned I was strangling (I like to use dramatic words but it’s pretty much true) on the average of 20 times per hour each night. Or over 100 times per night. I wasn’t getting any Stage 3 or 4 sleep, which is dangerous since lots of important healing and restoring things happen during those stages.

I was so thankful to get an official diagnosis, thankful to be able to have a CPAP (Continuous Positive Airway Pressure) machine prescribed for me, and almost delirious with gratitude for the relief it gave right away. I knew it was working when I started having vivid dreams again, and when I’d wake up in the same position as I’d been in when I went to sleep the night before, blankets undisturbed.

However, the nasal pillows I was encouraged to use with the CPAP (rather than a full-face mask) brought on a damaging phenomenon for me. Almost every morning I would wake up with my front teeth aching, which didn’t make sense because the mask I was using didn’t touch any part of my mouth. It was a mystery. Within about six months I noticed a gap between one of my front teeth, and felt the difference when I flossed. A couple of months later all my front upper teeth had slight gaps between them, and I finally figured out what was happening. One morning I woke up and realized that I was pressing my lower teeth and tongue against my upper front teeth — hard. I knew then that for months while sleeping, I’d been pushing against the back of my front teeth, probably all night long. Like reverse braces. Gah.

My dentist couldn’t help me and had never heard of such sleeping behavior. But when I finally went online to search around, I found many people who had experienced the same thing. “Braces at 53!” one woman lamented, and went on to write about almost the exact same things I’d gone through. Apparently when an apneic person’s airway closes in sleep, their strangling body will do anything and everything to breathe, and this is one of the unconscious responses, jutting the lower jaw out and pushing with the tongue against the upper teeth.

Weird. And sort of icky, I think.

I wish I had figured it out early on, and saved myself from the coming two years of braces. All I would have had to do was abandon my nasal pillows mask and wear a full face mask. The full face masks aren’t as comfortable and they take some getting used to, but not as much getting used to as not being able to breathe, in my humble opinion. And not as much as not being able to breathe and having your front teeth sticking out so far you can set your teacup down on them.

Once I decided which orthodontist I would see, I made my consultation appointment. They did a panoramic x-ray and took some really strange pictures of my teeth using metal instruments (retractors?) to pull my lips away from my teeth and gums as far as is humanly possible, and I learned that the movement forward was farther than I thought. When I learned it was affecting my bite and wearing down my teeth, it helped me make the decision to have things corrected.

It was a bit jarring when my orthodontist brought up these photos on the huge computer screen on her desk in the consultation room: 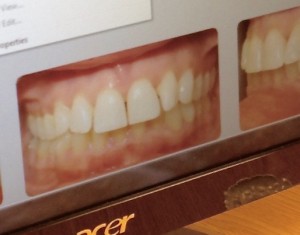 I don’t think I was prepared to see myself with no lips.

There are several more shots, but I’ll spare you.

My options are metal braces (like I had in sixth grade), ceramic braces the same color as my teeth, and Invisalign. Click here to see the difference between the metal braces and Invisalign. Invisalign braces are clear plastic trays that are worn over the teeth, 22 hours per day, removed only for eating. I will get a new corrective tray every three weeks, and at the end of two years my bite will be corrected. I chose these kind of braces because I like the idea of being able to take them off in the mornings and evenings to brush and floss my teeth with ease.

I had my Invisalign impressions taken at the orthodontist’s office yesterday. I had to bite down into these rounded plastic trays filled with bright green goo, that turned into pliable molds in three minutes. (These aren’t mine, but they’re what mine looked like.)

I’m thankful for teeth, for options, for provision from my heavenly Father, for the robins in my yard, for the approach of spring weather, and for family and friends.

Now, I’m wondering…how about you? Have any of you ever had braces? Or CPAPs? What were your experiences?