What Man Is This?

A couple of weeks ago Lloyd and I drove 3 1/2 hours south to Stillwater, Minnesota, for a medical appointment for me. Since my appointment was a morning one, we drove down the afternoon before and checked in to the carriage house at a lovely Victorian inn by the St. Croix River. It was such a peaceful place to stay. We ordered Mexican food and Lloyd went to pick it up and brought it back so we could have dinner in our suite.

After a good night’s sleep, Lloyd dropped me off at the clinic and then returned to the inn to load up our things, and get the provided breakfast boxed up so we could enjoy it on the way home. Quiche, fresh fruit, and a baked hotdish of some sort with Bisquick and cheese and pesto.

The plan was to drive from Stillwater to Bruno, where Lloyd lives, drop him off at his cabin, and then I would continue on to Duluth, an hour north of Bruno. We stopped in a tiny town called Finlayson, MN to get gas on the way home. It’s in the middle of nowhere, and the gas station was old and I’d never been there before. As Lloyd got out to fill the Outback’s tank, I glanced to my left and gasped. About a stone’s throw away was a man unloading boxes from a truck. He was stacking them on a dolly, one by one, getting ready to deliver the goods inside the gas station. I grabbed my phone and started taking pictures of him immediately, and when he turned my way to go into the station, of course I stopped.

The reason I gasped and wanted to get some photos was because he was Michael’s identical twin. Not fraternal, not someone who looked like he could be a relative. His twin. His hair, his build, his profile, his glasses, the way he moved, his broad back, short legs. Even the way he was dressed was like Michael. An olive green sweater/jacket. Jeans. Work boots.

Here is the man in Finlayson, MN. 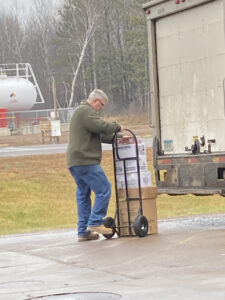 Here is a picture of Michael a couple of years before he died. I wish the photos were clearer. 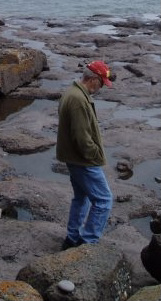 As the man passed in front of my car to go into the station, I could see that his face wasn’t exactly like Michael’s, but almost. From the side, though, he was a true doppelgänger. Lloyd finished pumping the gas and got in the car, and I showed him the pictures and told him about The Man Who Would Be Michael. We waited until the man made his delivery and came back out to return to his truck. As he walked in front of us, he turned his head slightly toward me, smiled a small smile, and raised his hand in a quick wave.

A couple of days before this, Michael had been heavy on my mind and heart. We are approaching seven years without him, and it gives me so much happiness to think of what life in Heaven might be like for him now. Suffering over, beholding such beauty, knowing such peace, worshiping the Savior he loved…. all the things we try to conceive of with our minds, knowing how limited and anemic our imaginings of Heaven must be. Because of the verse in Hebrews chapter 12 which tells us we are surrounded by a great cloud of witnesses, I had said out loud, “Michael, can you see us? Does the Lord allow you to watch, help, be involved in our lives at all?” Any Catholics reading this will have no trouble believing that could possibly be true. Most Protestants will think it’s not true. I myself have no idea, but the thought of it comforted me as I spoke to Michael in tears and loneliness.

Days later when I saw this man in Finlayson, I wondered what it could mean. I had never been to that gas station before. It’s hours from my home. Why did I see a man identical to Michael in almost every way, right after I had spoken to him as I never had before? Why were we there at exactly the same time he was, even though we didn’t really need gas that badly? Why did the man look at me, smile and wave? It could be coincidence, I know. But it still has me intrigued and on alert, wondering, pondering.

I texted the pictures of The Man Who Would Be Michael to a few friends — every one of them thought it was an old picture of Michael I was sending to them. Even his daughters had to look twice.

Whatever it means, it felt like a gift. I’m grateful to know there’s so much more going on aside from the things we see with our human eyes. Someday the veil will be drawn back completely, but for now, I’m content with little glimpses of God’s love.