On Monday night when I got home from the hospital, I sent out a few texts and emails updating people about Michael, and mostly asking for prayer.

When the sun came up Tuesday morning it was fourteen degrees below zero, which seemed apt to me. Our Foster women were of course concerned about Michael and I told them what I knew, and that we were all praying that he would wake up from this seizure-induced unconsciousness. All three of us exchanged hugs before they went out the door heading to their jobs, and I was touched when they both told me they’d be praying all day for Michael.

I was anxious to get the necessary morning tasks done — dogs out, dogs in, dishwasher loaded and started, and then off to St. Luke’s Hospital I went, leaning forward over the steering wheel I’m sure, trying to get there as fast as legally possible.

Has ever a woman been so excited to see her beloved? I can’t imagine even wives long separated from their imprisoned husbands, or the ones thousands of miles apart from their deployed servicemen, feeling any more anticipation than I felt that morning as I rode the elevator up to the fourth floor of the hospital, even though I had been with Michael just ten hours before.

I stopped at the nurses’ station on my way to his room and asked how he had done during the night. His nurse told me he had coughed and moaned off and on, and that his left hand had been so active they had put a rolled wash cloth in it to prevent him from rubbing his skin raw. But other than that there had been no change. He was being given the anti-seizure medication Keppra through his IV, because everyone was operating on the assumption that this almost comatose state was from a seizure.

I felt a rush of joy just to see my Michael. I hugged and kissed him and said all the things over and over I wanted him to know, and believed he could hear and feel everything, even if he couldn’t respond. I stroked his face, massaged his shoulders and legs occasionally, and sat with him all day. I was also happy to see that he could chew the small ice chips I placed in his mouth, and easily swallow.

I was so grateful for the family and friends who were there that day, sharing their hugs and prayers, tears and laughter. 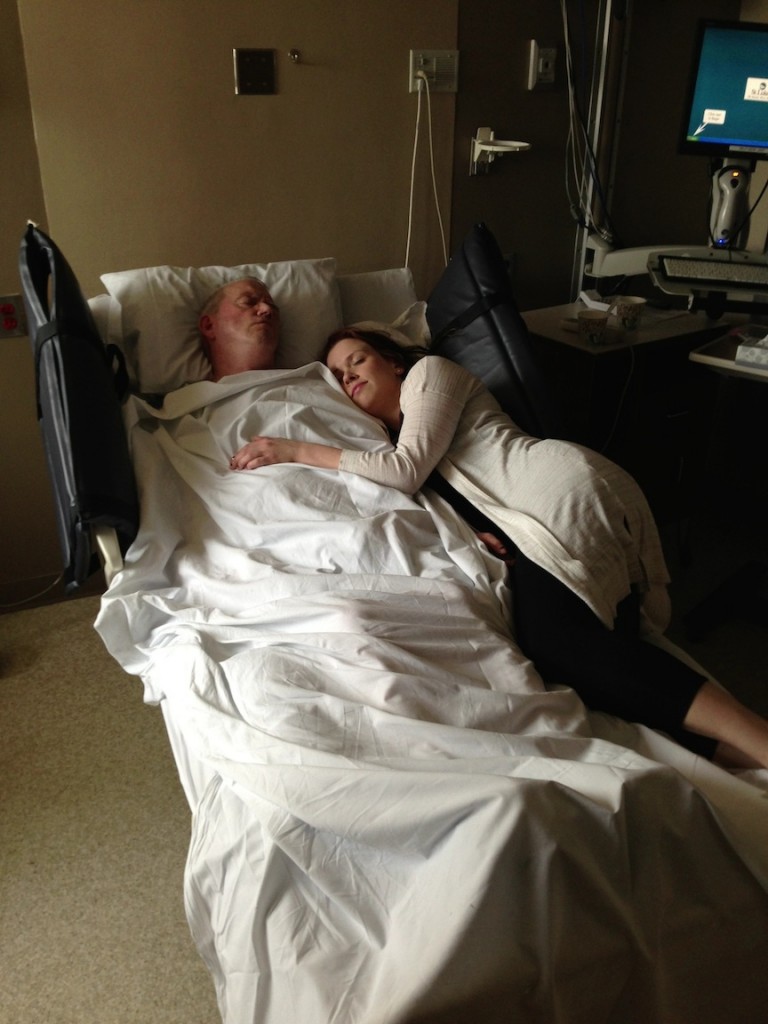 Everyone was encouraged by the possibility that with Todd’s Paralysis, Michael could wake up at any time, but in the meantime it was like all my people had come to help me keep vigil.

This photo is of our youngest daughter Sara cuddled up to her daddy.

Late Tuesday afternoon I spoke to Dr. McKee and he told me he had seen this kind of episode before in seizure patients, especially in older folks, and said he wasn’t particularly surprised by Michael’s lack of response. When I asked him directly if he had seen people be this unresponsive and still wake up days later, he answered kindly, “Oh yes. We’ll give it another day or two and he could definitely come out of this yet. If he doesn’t, I will order another CAT scan for Thursday morning to see if there’s something going on in his brain that the first scan didn’t show.”

I mostly just heard the first part of his answer, and when our conversation was over I put my hands over my face and burst into tears. I was so relieved that Dr. McKee had seen all of this before and that he wasn’t worried yet. I kept sobbing, “Thank you Lord, thank you Jesus! Thank you thank you thank you!”

I really think in hindsight, I was in sort of a fog during the early days following Michael’s hospitalization. Today I asked my daughters to help me remember some details I might not be recalling, and Carolyn reminded me that on Tuesday, February 3rd when she and her family were there, she played the song “If I Were a Rich Man” from the movie soundtrack of Fiddler on the Roof, one of Michael’s longtime favorites. Oh, he loved that movie. We chuckled as we all listened, commenting on how Michael probably thought deep down inside he was Tevye, the bearded, hard-working father of five daughters and the husband of a strong-willed wife, who wanted to please God and also wouldn’t have minded a little extra money in his pouch. *Grin*

Another thing Carolyn reminded me about was that her husband Jeremy, Michael’s son of the heart, his hunting companion, and a skilled and compassionate nurse, tended to Michael so beautifully when he was there visiting that day. Even though Jeremy works at another hospital, he changed Michael, kissed him and cried as he did, expressing his devotion to this man he loved like a second father.

That evening I went home a little earlier since my friend Ginny had texted and told me she was bringing dinner for us. She delivered a delicious feast, and I was struck by what a lavish gift a meal is for a family in crisis. I have taken many a dinner over the years to couples with new babies, people recovering from surgery, those who were grieving, and it always felt so minimal and not as helpful as I wished it could be. Being on the receiving end though, I felt differently. What a help it was to sit down to a delicious meal with our Fosters, who were exclaiming about how good it all tasted…so much so that it made me cry with relief and gratitude.

When I went to bed on Tuesday night, I felt a little niggling worry in my chest. I kept praying and thanking God for all He had done for us, for the ways He poured His love out on us through our family and friends. I truly felt so loved and supported. But I wanted to hurry up and go to sleep so I could wake up the next morning, head right down to St. Luke’s, and hear from the nurses that Michael had shown signs of coming out of his unconscious state during the night.

But that isn’t what happened.