To scoot, or not to scoot?

When I was in elementary school, mini-bikes were the craze. I’m not sure mini-bikes even exist anymore, but most of them had simple welded frames, noisy Briggs and Stratton engines and fat little tires. I knew a couple of people who had them, and once I learned to ride one, that was it. I wanted a mini-bike. Our next door neighbor had a red mini-bike, and I used to watch him ride it up and down our quiet street, and I just yearned to have one of my own. 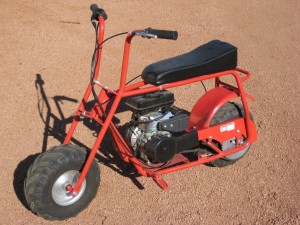 Every month or so I would ask my dad, “Do you think I could get a mini-bike?” and he would respond with a hint of his old Missouri drawl, “Well now Julie, I don’t know.” Because that wasn’t a firm no, I didn’t give up. Dad even drove me to our local Sears store one afternoon to check out the three models they had on display. The cheapest one was $105.99, a lot of money in the late 1960s. I kept trying to think of ways to convince my folks I could handle the responsibility of a two-wheeled motorized vehicle while I was in the fifth grade, and tried to think of ways I could earn the money for one myself. My weekly allowance back then was $2.00, and what with going to the movies and buying Reese’s peanut butter cups, it would have taken me years to save up.

Sometimes my parents wavered, because other kids in Southern California had mini-bikes. One summer day before my sixth grade year at Workman Avenue Elementary School began, I asked my dad about it again. “If I get straight A’s in school this year, then can I pleeeease have a mini-bike?” After a long pause, my dad said “All right.” Yippee! I had a goal now, and I could just hear that putt-putt motor that would be mine in ten months’ time.

I was a pretty good student but I think my dad was counting on the fact that I usually got one or two B’s along with mostly A’s. I usually got B’s in Handwriting and Science. He probably thought it was a safe bet that I would get at least one B on my report card during sixth grade, but I set my sights on that mini-bike and didn’t let the prize ever get far from my mind.

I had Miss Nancy Curry for a teacher that year, and I loved her. I remember that we studied South America, and that she said “Ven-zoo-AY-la” instead of “Ven-ezz-WAY-la.” I still don’t know which is correct, but it sure must have made an impression if I’m remembering the way my sixth grade teacher pronounced a South American country forty years ago.

Anyway, I put forth the effort, and in June I brought home the results – straight A’s. I’m sure my parents were thinking, “What in the world are we going to do now?”

For some reason my dad wasn’t johnny-on-the-spot about taking me mini-bike shopping. He’d say things like, “Well hold on now, I said we’d get you one and we will. Don’t pester me about it.” I hated it when my parents said things like that.

One afternoon I came home from swimming at my friend Tauni’s house, and my dad said, “We’ve got a surprise for you in the garage.” Of course my heart jumped and I thought it was my little red mini-bike, but when Dad opened the garage door, what was sitting there in all its Italian glory was one of these humdingers. 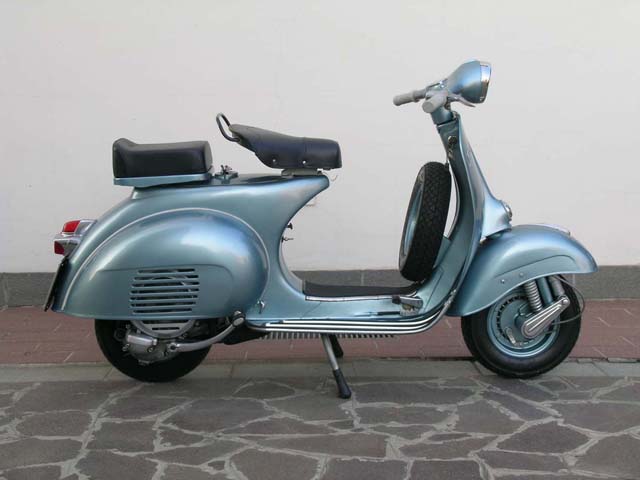 It was a used, pretty noisy 1960-something Vespa 150, and it was blue just like the scooter in the photo. The only way mine looked different from this one is that it didn’t have a spare tire.

My dad bought it from my oldest brother Larry, who had a Honda motorcycle and a Vespa so he and his wife could go riding together. Apparently the Vespa didn’t get used and my dad viewed it as a safer alternative for me. The Vespa’s engine was in the back and the chances for burning myself if I fell were much less than with a mini-bike.

Once in a while I would pack a picnic lunch, put it in the fender compartment (on the other side of the back wheel) and a friend and I would ride one block to Covina High School, and ride around the track sixty or so times. We would even ride through the halls of the big school (in sunny SoCal there were no indoor halls like schools have in the Midwest), all around the baseball diamonds, and around the gym. We would stop to eat our lunch, then drive the one block home, feeling like we were the ultimate in sophisticated girl adventurers and we had traveled the world in Italian style. Except the truth was we were eleven years old with buck teeth, freckles and spindly legs.

I had my Vespa for a couple of years, and then I started getting interested in cars. My dad taught Driver’s Education in our school district and since he taught me to drive at a very young age, he used to let me back our car out of the driveway and then drive it back in, out of the driveway and drive back in, and you guessed it – soon I wanted a car. I saved up and bought my first car on my 16th birthday – you can see a photo of it and read more about it here.

Fast forward to 2009. I am 51 years old. I drive a non-descript gray van. I haven’t been on a two-wheeled conveyance of any kind in many years. But a few months ago I started thinking about my old blue Vespa. I see all the new kinds of motor scooters that people (women too) are riding, and it looks so fun. I asked my husband Michael what he thought about me buying myself a motor scooter and he said without missing a beat, “Go for it!”

Go for it? Are you saying that a woman with three adult daughters, seven grandchildren, and a bit of extra heft should really get a motor scooter to ride around town? I guess that’s what he’s saying.

To scoot, or not to scoot? That is the question…