The effects of encouragement

My husband encouraged me today. I don’t know how he does it, but with very few words he usually manages, with his smile, his mercy and his (deceived) high opinion of me, to lift my mood. Not always, mind you. He’s not a miracle worker. Jesus is my miracle worker. But the couple of things Michael said to me today made me reflect again on how important it is to encourage someone. Anyone. I want to get better at encouraging those I love.

Several summers ago, nine of my favorite women crowded into our den each Tuesday morning for our annual summer Bible study, and we did Mary Kassian’s Conversation Peace. If you clicked on the link, do not be deceived by the whimsical, cartoonish member book. The study was brutal. And glorious. And for me, one of the most needed studies I’ve ever done. I still think about it years later.

On page 96 of my member book, I wrote myself a little note with an arrow pointing to a paragraph that impacted me: put on blog, I scribbled. Along with learning to hold my tongue, listen more, not exaggerate, and seventy-three other almost impossible tasks related to godly speech, I learned a lot about encouragement from this study.

With credit and admiration to Mary Kassian, here’s a little story quoted from Week Five of Conversation Peace:

His mother was not home, but the young boy wanted to draw, so he got out the bottles of ink and enlisted his sister as a model. The young artist made an inky mess of his hands, clothes, table, and floor. Just as he was finishing his work, his mother returned. For a moment, she stood in the door and silently took in the scene. Then, instead of scolding him, she picked up the portrait and declared, “What a beautiful picture of your sister!” and kissed him. Later in life, the great artist Benjamin West recounted, “With that kiss, I became a painter!”

Benjamin West was a prolific American painter who was born in Pennsylvania in 1738 and died in 1820. Here’s one of my favorite paintings of his, called, “The Incredulity of St. Thomas.” 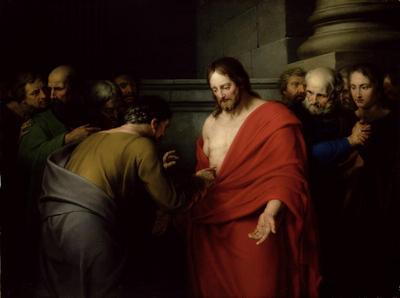 Now Thomas (called Didymus), one of the Twelve, was not with the disciples when Jesus came. So the other disciples told him, “We have seen the Lord!”  But he said to them, “Unless I see the nail marks in his hands and put my finger where the nails were, and put my hand into his side, I will not believe it.”

A week later his disciples were in the house again, and Thomas was with them. Though the doors were locked, Jesus came and stood among them and said, “Peace be with you!”

Then he said to Thomas, “Put your finger here; see my hands. Reach out your hand and put it into my side. Stop doubting and believe.”

Thomas said to him, “My Lord and my God!”

In this amazing painting, without even being able to see Thomas’s face, we can tell what he was thinking, how suddenly everything had changed for him.

I can’t help but think about Benjamin West’s mother when I see his paintings, and the power her words had on her son.

I want so much to be a better encourager, and today I’m thankful for the opportunity to try.