Taking a poll on Edith

Please cast your vote and help us decide on something of profound importance! First, here are the details that may aid you in voting:

Anyone who reads this blog regularly knows that Michael and I have two Miniature German Schnauzers named Edith and Mildred. If you are interested in knowing how different they are from one another, click here for the details.

Our oldest Schnauzer, Edith, is pretty intelligent and a bit quirky. She can see herself in the mirror, and always thinks it’s another dog. She barks, whines and paws, and tries to get to the other dog so they can play together. She’s perplexed why the other dog doesn’t come into the room to join her, but instead just mimics everything Edith does. She gets frustrated with this.

Edith can also see herself in our oven door, and thinks another dog that looks just like her lives in the oven. No matter how hard she tries to make contact with the other Schnauzer, it never works. Poor Edith.

Edith thinks the other dog in the mirror/oven door/fireplace glass/French door is named Piggeth, and even if we barely whisper that name…”Piiiigetttthhhh?”…Edith springs up from her nap or whatever else she was doing and frantically looks in any mirror or the oven door to see if Piggeth is there. Piggeth (Edith’s evil twin) is always there, but Piggeth is not always accessible. Poor Edith.

Edith also loves to watch television. She has an attention span longer than a fifth-grader. If a show is interesting to her, Edith will sit alertly and quietly in front of the television in our den, watching intently for sometimes thirty minutes, slightly tilting her head as the scenes change, and waiting. Waiting for any sign of animal life.

If any animal appears on the TV, Edith immediately jumps to the screen and puts her nose against it so she can inspect the animal at close range. Consequently, we have to clean dog snot off our television screen more often than the average American family.

Did I mention Edith has a deviated septum? She makes loud noises when she breathes and she snores when she sleeps. When she thinks Piggeth has come to the oven door to say hello, or especially when she sees four-legged animals on TV, Edith jumps and snorts and gets so worked up we have to pull her away from the screen and 1) hold her on our laps to prevent her from engaging in this behavior for close to an hour, or 2) change the channel so no animals can be seen, and only then Edith will reluctantly go to the couch and lay back down. But she keeps her beady little brown eyes on the screen, and those silver schnauzery eyebrows twitch as she waits for the next beast to appear.

Edith also loves The Traveling Wilburys. Have you ever heard of them? They were a short-lived group composed of George Harrison, Bob Dylan, Jeff Lynne, Tom Petty and Roy Orbison. Long ago Edith heard their song “End of the Line” and started reacting to it, running around the house and acting very excited. We showed her the online music video on the computer, and she did the same thing at the computer desk that she does to the TV: jumped up and down and tried to connect with what she saw. Only this time it wasn’t with an animal – it was with the Traveling Wilburys. To this day if she hears that song she runs for the office and tries to see George and Bob and Tom up close. Not until the song is over does Edith return to her normal self and go lay down.

I took a few photos of Edith in action last night. 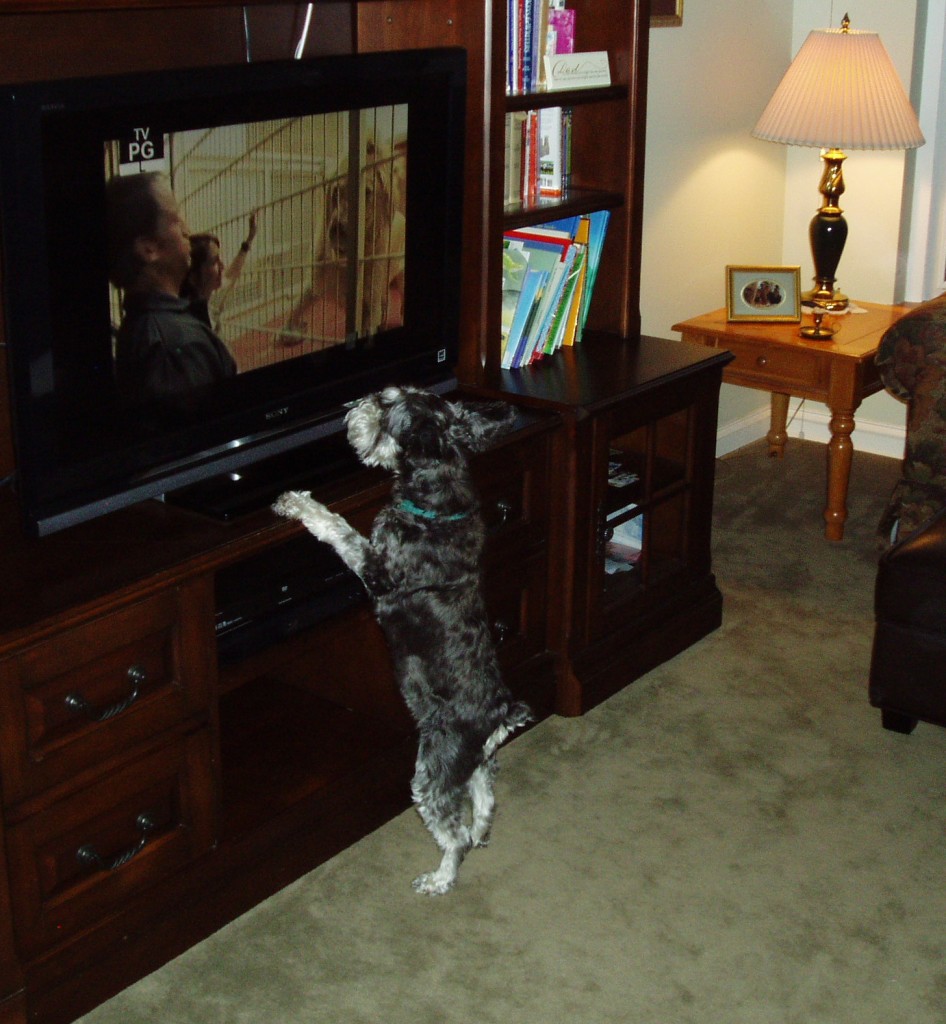 Edith attempting to interact with a lion 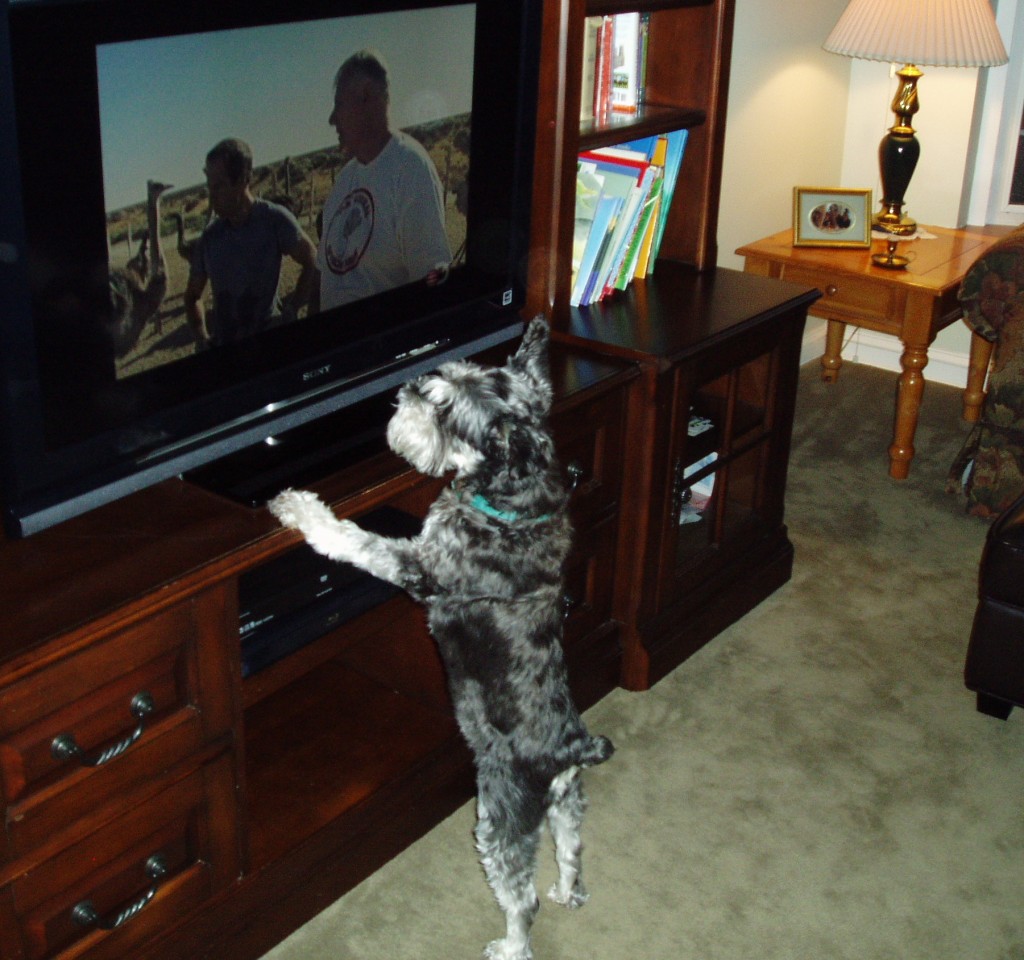 Edith trying to communicate with ostriches 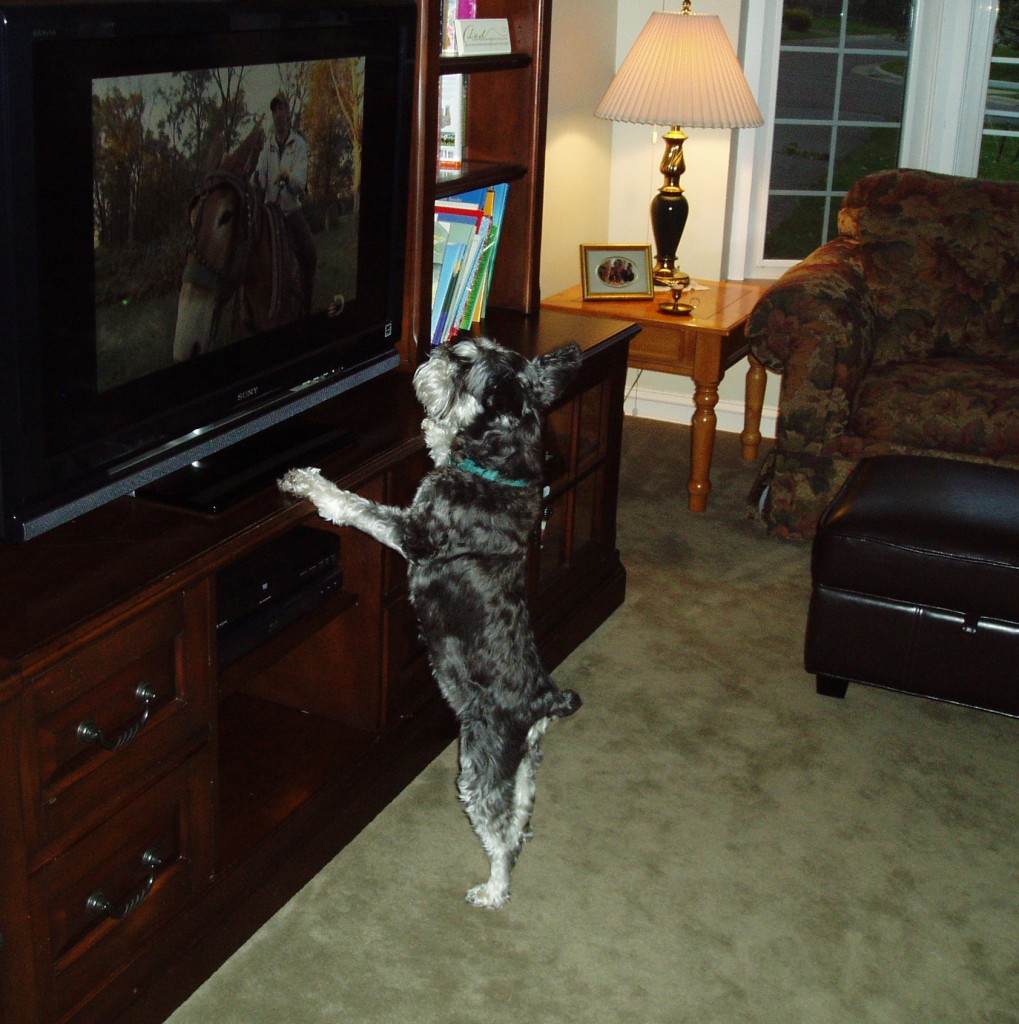 Edith endeavoring to meet a mule 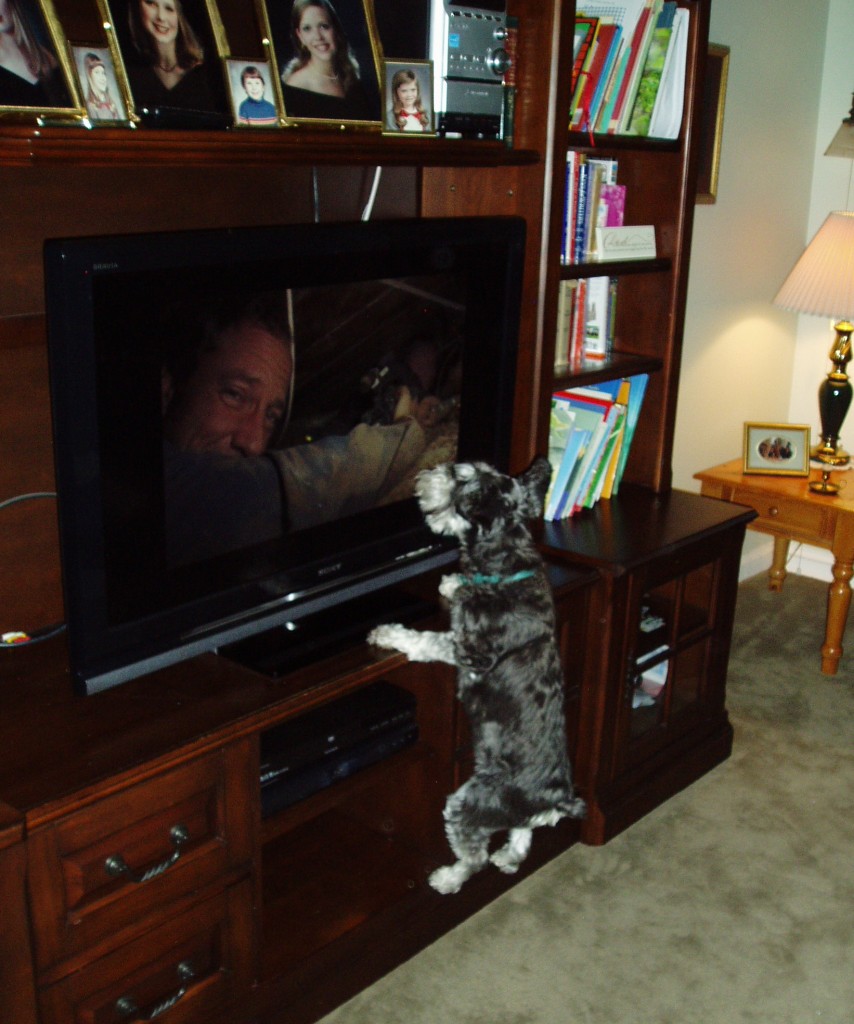 Here’s where the poll comes in. Edith is eight years old and has been doing this her whole canine life. We think it’s amusing and are used to it. Sometimes we laugh, sometimes we get annoyed and scold, “Edith! Go lay down! It’s just a hyena!”

But whenever we’ve had company and they happen to see Edith’s antics, everyone always says, “You should send a video of Edith doing this to America’s Funniest Home Videos!” We always smile and agree, knowing we never will. For one thing we don’t have a video camera, for another thing it’s just our little Edith watching television. Or watching Piggeth in the oven door. Or in the mirror. Or in the fireplace. This is just normal Edith behavior to us.

What do you think? Is it goofy enough to ask a friend to take a few minutes of video of Edith trying to make contact with Piggeth or a giraffe or The Traveling Wilburys, and then send it off to AFV? Or is it just something we should endure enjoy by ourselves and let it go at that?

Please help us decide! You can say yes or no by leaving a comment to this post. We will take the advice of my wise blog readers and let you know what the results are.

Thank you, my friends!