Yesterday was our youngest daughter Sara’s 30th birthday. I think that means I’m old now. Anyway, the whole family got together for dinner at the place of Sara’s choice, and we had a great meal. Sharon and I had Cobb salads, Sara had cedar plank-cooked salmon, Michael had a turkey dinner with smashed potatoes, Chris had a breakfast skillet with a huge buckwheat pancake, Carolyn had a burger called the Grand Royale, Jeremy had a bison burger, and the seven children had various mac-n-cheese like things off the kid’s menu, with fresh fruit and steamed broccoli.

We had a little surprise for Sara planned, and I tried to carry in our small CD player/stereo without her seeing, because we were going to sing. Over the years our family has rewritten famous songs, putting our own words in them and ridiculously performing them with a karaoke CD as accompaniment in the background. We did it at Sharon’s wedding shower, at Jeremy and Carolyn’s wedding reception, for Chris’s 50th birthday, and also for various friends over the years. It was Sara’s turn to have a song written for her.

If you aren’t familiar with music from the 1960s, you may not know the song. But most of you should remember it. I’ll wait quietly while you click here to see what song I’m talking about. Do you remember that one? And hasn’t popular music changed a bit since then? Yikes.

So before the server brought the fourteen meals we had ordered at the restaurant, we closed the doors to the private room where they seated us, plugged in the CD player, and sang “Mrs. Brown You’ve Got a Lovely Daughter” to Sara.

Only these were the words we used (since my name isn’t Mrs. Brown, and my husband’s name isn’t Mr. Brown, but our last name does begin with B):

Mr. B. you’ve got a lovely daughter
Girls as sharp as her are somethin’ rare
Yes, it’s true, with flowers she’s “white-hot”
Some day she might just have a business of her own

She was quite a picky little toddler
Her Osh-kosh cuffs had to be just so
When she was 12, she used to clean a lot
She had a business she called “Sara’s Spic and Span”

When she was young, Mom prayed for a cardinal
Now their whole house…is filled up with…red birds!

Mr. B. your daughter sure loves doggies
She lets Edith lick her on the lips
But her mom, she doesn’t like such things
But Sara’s 30 now, so nothing can be done

She’s workin’ out, she’s obsessed with fitness
Goes to the gym, kettlebells and squat jumps!

Mr. B. you’d better keep your doors locked
Guys from match.com are keen to call
Just so no! No to the pond cleaners!
No to the guys who think that bike repair is fun

So now you know why you would never go wrong by saying a prayer for our family. 🙂

There are a few little jokes in the song that our family would understand, and I don’t think Sara would mind me telling you about them, but I don’t want this blog to be a sedative, so I’ll think about that another time.  I am happy to say that Sara laughed at our performance and we had a nice dinner.

In other news, I have begun packing! Because on May 31st, we are moving to a new house. At the 11th hour, we found a place that might just suit us well, and a new (young) family of three will be moving into our house.

I will post photos of the new place once we get settled, of course, but the best two things about it that I’ll share right now are: 1) it is one block from Lake Superior and the view is gorgeous, and 2) it’s all on one level, which is what we need in this phase of our lives. We are very grateful, and I’m getting used to the idea of going, and am looking forward to the new place.

I decided that I would try to pack one room per day. Ha. I guess I have to lower the bar a little bit. Yesterday I packed the books just in our living room book cases, and here they are: 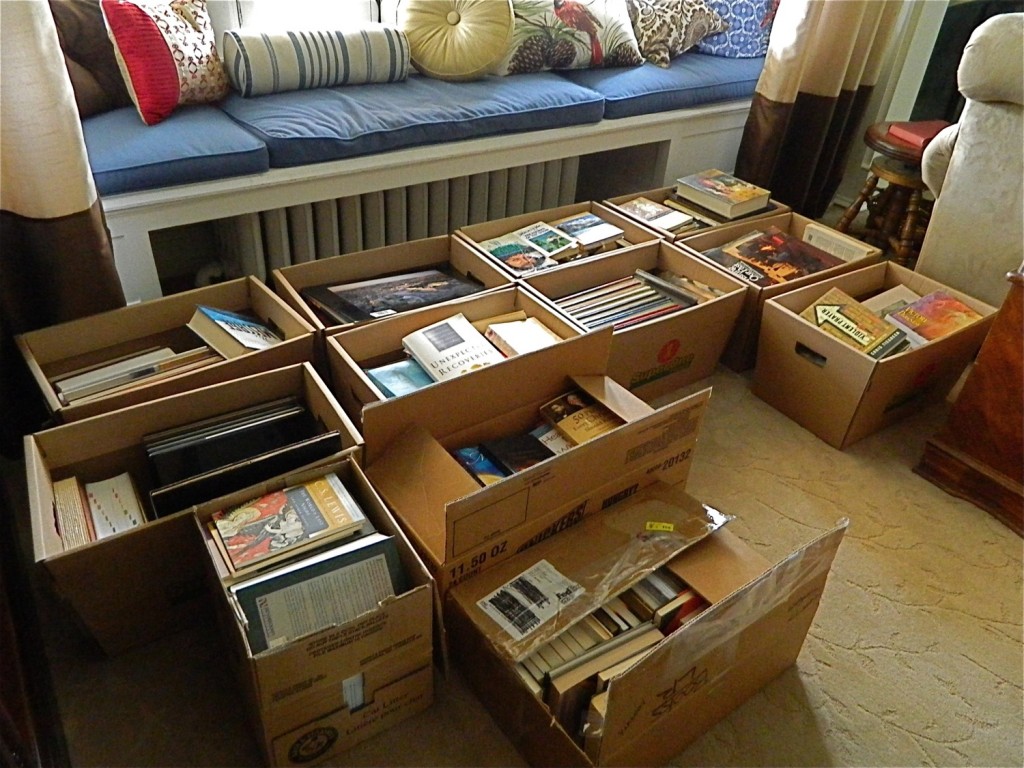 We have a welcome, soft rain falling as I sit here in my office and type this. The grass is finally turning green and big fat robins have returned to our area and are hopping around the yard, cocking their heads sideways, to hear the worms underground. At least that’s what I’ve always been told about robins. Maybe that’s a euphemism we need to add to our speech, you know, like “faster than a rabbit” and “slow as molasses in January”? We could now say something like this, “His hearing was sharper than a robin’s!”

I am off to fix some dinner now, so will close this disjointed post with wishes for a blessed weekend to all of you. I’m running a little late, so I hope I’ll be faster than a muskrat!