In a few weeks I’ll be going to Pacem in Terris. It’s a silent Christian retreat center in the Minnesota woods about two hours south of where I live. I’ve been there four times now, but it’s been a long time since I’ve visited. Nine years, to be exact. Michael was still alive then and was beginning to struggle with Lewy Body Dementia, although we didn’t know then that’s what it was, and that it often came as the dread companion of Parkinson’s Disease. I knew it would be the last time I would go to Pacem for a long time.

The first time I went to Pacem, I asked to stay in the hermitage called St. Clare. My oldest grandchild is named Clara, and it seemed right to pick something close to her name. Walking in the woods of oak, pine and birch, keeping silence, pouring my heart out to God in pen and ink, watching chipmunks and foxes and downy woodpeckers, reading His Word and slowly taking in what I thought He was saying to me, existing with the rising and setting of the sun, was something my soul was craving.

There are sixteen one-roomed hermitages nestled in the woods, all named for saints. Pacem is a Catholic retreat center, but the majority of the hermits who visit are Protestant, I learned. Some people come to de-stress. To sleep. To discern a direction from the Lord. Many need to be re-oriented in their spiritual journey. 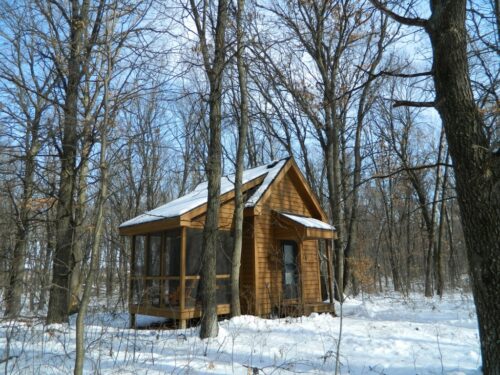 Each place has a screened porch on the side, as you can see above.

I remember when I first heard about Pacem, old friends Chuck and Sally told me they sometimes heard God say to them, “Just give me 24 hours.” As in, see what I can do if you will set apart time to be with Me.” And they would drive down to St. Francis, MN, spend that time with Jesus and come back so refreshed. Each time I’ve gone I’ve spent two nights and almost three days; I would like to be able to stay three nights someday.

The second time I visited, I asked to be placed in the hermitage named for St. Francis, because it’s the one farthest out in the woods, away from The Big House, the Chapel, and the other hermitages. I wanted to feel that solitude and remoteness, like I was way out in the desert/woods with Jesus, with no distractions and no agenda except being with Him. I’ve always known that being with Him would accomplish whatever needed accomplishing in my life. And there’s still soooo much work that needs doing.

The third time I visited Pacem (and they say the Latin pronunciation is potch-em) I reserved the little wooden hermitage called St. Mary Magdalene. I love her. I’m not Catholic, but if I were, and had to choose a patron saint as my advocate and companion, it would be Mary Magdalene. She would know how I feel, and understand how my life has been, and how it has paralleled hers in ways. She and I have been sinful women, needing so much that no one else but Jesus could give us.

Jesus delivered Mary from every evil that controlled her, and He was the only one who could. She followed Him closely for the rest of her life (we presume), out of gratitude and devotion and love. He showed her what real love is. She stayed close to Him as He walked the road to the cross. And beautiful wonder of wonders, she was the first to see Him risen, and ecstasy of ecstasies, He spoke her name and her eyes were opened. I wanted to stay in the cabin named for Mary Magdelene to experience His love, deliverance, and to hear Him speak my name.

Can you imagine Jesus speaking your first name? Calling you, calming you, thrilling you, correcting you, humbling you, saving you?

The thought of hearing His actual voice someday, not just the still small voice I sometimes struggle to interpret in my innermost person, but the matchless voice of the One who spoke light and life into existence, is what I live for. 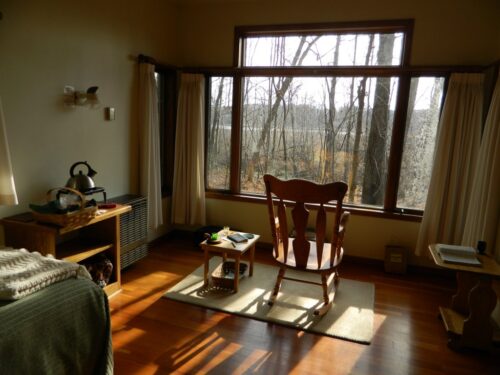 The last time I went to Pacem I stayed in St. Teresa of Avila, and I chose that hermitage because it was on a part of the property I hadn’t been before. I wanted to sit in the rocking chair and look out the window into the woods, and see the wildlife and sense the quiet, to feel the darkness descend and envelop me at the end of the day. I didn’t know much about St. Teresa of Avila and still have only read a bit about her. I went to Pacem that time with my beloved sister-in-law Christy, who was visiting from Tennessee. She was in her own hermitage deeper into the woods, and it was winter. The trails were covered with icy snow. The theme of that particular stay was clear to me: humility. I read and wrote and prayed, and with God’s help, “poured contempt on all my pride.” It’s the work of a lifetime, really, and is still ongoing. Some families come to know that their generational entanglements have and will involve alcohol and/or addiction. Others see that anger threads its way through the familial lines. Maybe some can see the quest for wealth or power always surfacing. My family’s main thread (or rope is more like it) was pride, it seemed to me. Yes, there has been addiction and anger and all the rest, but I always saw pride as the root. I spent much of the time reading and journaling about the astounding humility of Jesus, from the gospel of Matthew.

In April I will be staying in the hermitage named St. John, the Beloved. He was most likely the youngest apostle, the one who was so close to Jesus. He wrote the gospel of John, the three epistles that bear his name, and the book of Revelation. He was the only one of the apostles who stayed near to Jesus as He died on the cross, and it was to John that Jesus entrusted the care of His mother Mary before He died. I want to leave open what God might have in mind for me when I stay in this hermitage, but I’m hoping that love, and learning to love, will be part of it. It’s not that I don’t love. I just don’t always love like He did, and isn’t that what our Christian life is about? That we would learn to love God with all our hearts, souls, strength and minds, and that we would learn to love others as He does? 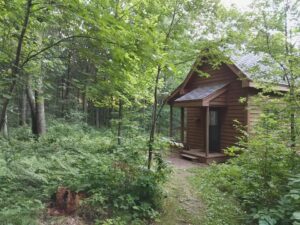 I’ve never been to Pacem in Terris in the spring before. I’ve always gone in the fall or winter. There is no electricity in the hermitages, no running water. A delicious basket of homemade bread, some fruit and cheese, along with gallons of fresh water are provided for each hermit. I don’t take much with me. Clothes to walk in, a warm flannel nightgown to sleep in, my journal and smallest Bible. I am ashamed to say I know it will be unnatural for me to leave my cell phone in my car, but I will. I haven’t been completely unplugged for years and that fact in itself tells me how out of order my life is.

Have you ever been to Pacem? Or a retreat center like it? What was it like for you?

God’s peace to you,