Today was my second class day at the University for Seniors. I feel my brain stretching already. It’s a wonderful thing. Our first assignment in the class “Memory to Memoir” was to write about a neighborhood I’ve lived in. I chose the second house I lived in, beginning right before I turned three years old. I lived there for 12 years and have very clear memories of that time. Isn’t that how it is as we get older? Someone in my class today said she couldn’t remember what happened yesterday, but all the events of her childhood are right there in great detail. I relate to that. I thought I would share the assignments I do here on the blog, and this is my first one.

We were to draw a map of the neighborhood we wrote about. Here’s my map of the block I grew up on in West Covina, California: 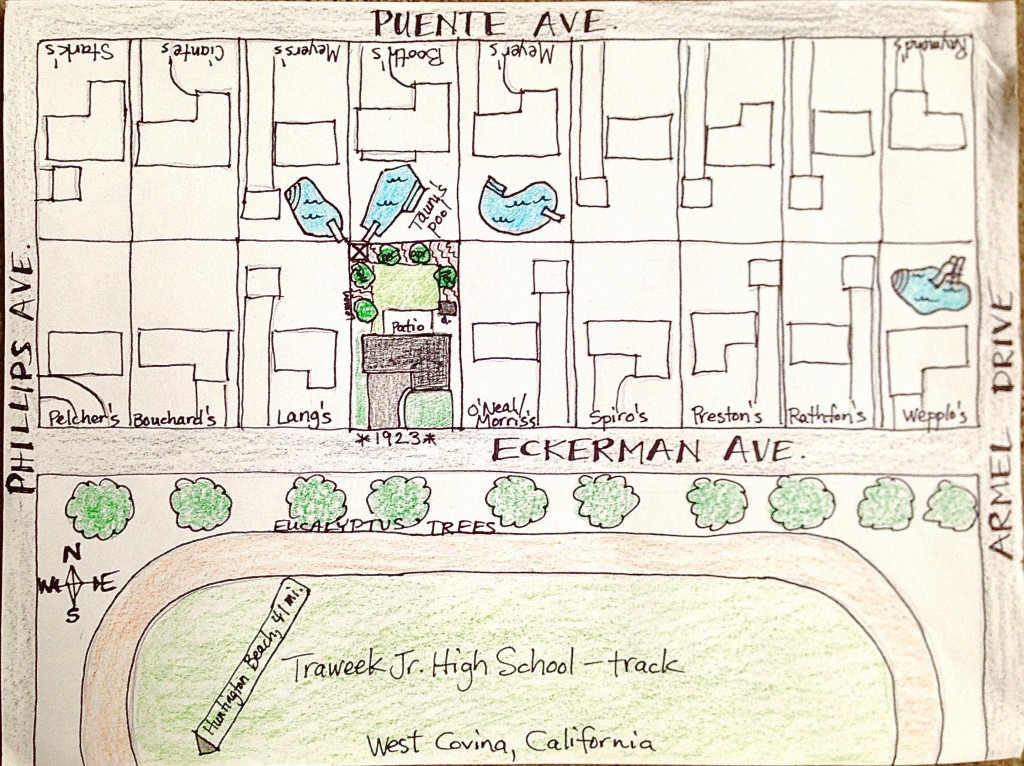 I put the last names of the neighbors I was acquainted with, and as you can see I certainly knew who had swimming pools on my block, since our family did not. You can click on the photo to enlarge it if you like.

I’ve written about some of this before on the blog, but this piece is slightly different. We all read our memoir pieces out loud for the class members to comment on today, and one of the constructive comments I received was that I might have wanted to include more smells. We are encouraged to write using all the senses — what did we see, feel, smell, hear, etc?

I didn’t title my paper, but I guess for now I’ll call it:

One of my earliest memories is when I first saw our new house on Eckerman Avenue. I was almost three years old. I was holding onto the side slats in a rented, open tow-trailer as our copper-colored Buick LeSabre station wagon slowed to a stop in front of the three-bedroom ranch-style home numbered 1923. My dad was driving, my mom was in the passenger seat, my thirteen year-old brother Steve steadied me in the trailer, and our aging family dog Duchess sat with us among the boxes.

There were nine houses on our street and I would eventually come to know every family. The Pelchers, Bouchards, Langs, Sooters, O’Neals, Spiros, Prestons, Rathfons and Wepplos.

Across from us was the back field and running track of Traweek Junior High School. Just inside the tall chain link fence surrounding the school block was a line of towering eucalyptus trees. For years I ran, skateboarded, biked, and later motor-scootered up and down the sidewalk and street under them; I can hardly recall a childhood memory without picturing the slender shadows of those trees, or how they filled my bedroom with the scent of Vicks Vap-o-rub when the Santa Ana winds blew.

I made my first friend when we lived on Eckerman Avenue. Her name was Tauni Booth, and she lived directly behind me in a house just like ours, except the floor plan was reversed. Tauni’s family was one of four on our block who had a built in pool. After I learned to swim at the Covina Park Plunge when I was five years old, being in the water was all I wanted to do. I took an old, rusty step stool from our garage and dragged it to the far left corner of our back yard, where I placed it against the pink concrete block wall that divided Tauni’s house from mine. When my chores were done I’d climb that stool and sit conspicuously on the top of the wall, hoping one of the Booths would come out to swim and invite me over. Many times they did; I must have spent hundreds of hours in their turquoise heaven. I never knew it was impolite and presumptuous to perch up on that wall, watching them swim and putting my yearning on display like that.

Over the years my love for water deepened. Swimmer’s earache, raisin fingers, and burning lungs from the mix of smog and chlorine never deterred me. I swam whenever possible, and by the age of ten I was swimming out past the breakers at Huntington Beach, then pouting when the sun would begin to set and my parents would say it was time to make the hour-long drive home.

At the beach my parents always wore their regular clothes; I was a lone participant in my swimming passion. Mom sat in the car and Dad walked to the water’s edge with me and eventually sat in the sand.

I used to tell him to raise his arm up in the air when he thought I’d swum out a mile. I didn’t know then that he wasn’t about to go along with that, but he let me believe he would. I would run into the greenish gray, opaque surf, wade my way past the little waves, front crawl past the bigger waves and the waiting surfers astride their boards, and just keep swimming. I would swim ten or fifteen strokes, and then tread water and look back toward the beach. There was my father in his brown pants and white sport-shirt, legs wide and knees bent, with both arms resting on his knees, watching me. I’d turn and swim toward the horizon again, noticing the pockets of warmer water here and there in the cold. My feet would brush against the slimy bulbs from the Pacific kelp forest and I would always shudder and hurry to swim away from them. This was before the movie Jaws, so the kelp forest seemed like the greatest menace I faced. A shark never entered my mind, nor my father’s, apparently. Swim… turn around again… look for his signal. I just knew I was a mile out because his shirt looked like a white dot against his dark pants now. There was his long arm raised above his head, slowly waving in a left-to-right arc, telling me I had reached the mile point.

Before I swam back to shore I always took a deep breath, squinched my eyes tight against the salt, and dove down, down to see how deep the water was. When I couldn’t touch the bottom I was satisfied I had gone far enough.

I liked coming home to the yellow house on Eckerman Avenue even though it didn’t have a pool. After a day of hard swimming in Tauni’s pool or in the mighty Pacific, I’d make a peanut butter and jelly sandwich and settle down with a Nancy Drew book in my pink bedroom.

Years later it felt like the ground beneath that house opened up to devour our family, and we all moved away in separate directions, never to be truly mended.

Today I’m still irresistibly drawn to water. I don’t swim as much as I used to, but every morning I sit in my dining room and look longingly out onto the largest freshwater lake in the world. Sometimes I wonder what it would be like to swim a mile out, and not look back.

So now I need a title. “Water” won’t do, I don’t think. What do you think the title of this paper should be?

Thank you in advance for your suggestions!