Today in America, it is Veteran’s Day. I thought I would post my husband Michael’s story in honor of his service in Vietnam. Anyone who knows Michael would realize that he’s not as wordy as what follows – but this is his story, as told to me many years ago.

I thought it deserved putting down in print.

In 1966 at the age of seventeen, I left my lifelong home in Northeastern Minnesota and joined the United States Marine Corps. I saw my decision as a chance to get away from my parents and school and all that entangled me, my father saw it as a decision that could make a man out of his headstrong, only son. 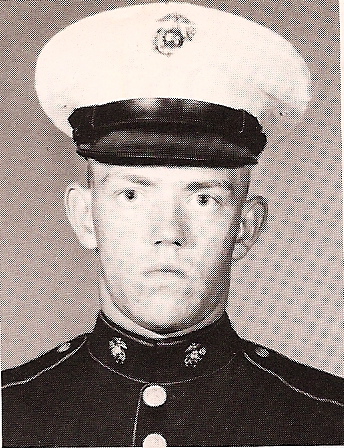 Successfully conquering the mental and physical challenges of Marine Basic Training fueled the impression I had about myself; I was young, strong and indestructible, and had an entire lifetime ahead of me, so when Vietnam was my ordered destination I didn’t blink twice. At eighteen I felt I was prepared to go and accomplish what was required of me, and I cavalierly thought I’d come back as unscathed as I was when I went. When I boarded that Vietnam-bound aircraft jam-packed with fresh faces and newly shaved heads, I sensed I would soon see more death and destruction than Gunsmoke or Combat had ever shown me, but I had no inkling of the death and destruction that was skulking in the Asian jungles, waiting to tear me apart in a different way.

Three days after arriving in Da Nang I had my first encounter with the carnage that would eventually become an almost everyday occurrence in my tour there. Three young Marines took a direct hit from an enemy mortar while they sat at a nearby table eating their meal. Their bodies were completely blown apart. I felt an unfamiliar gnawing somewhere deep inside me but I knew I couldn’t last in Nam if I pondered it too much. I turned my head and forced the scene from my mind.

The next eighteen months were filled with days and nights that only my fellow Vietnam vets can truly comprehend. Back home in Duluth I had felt awkward and uncomfortable around sickness and funerals; in Vietnam I eventually learned to callously sidestep the dead bodies blocking my path as we swept the jungles during surveillance. Prior to the war I had drained a beer or two; once into the thick of things on the front lines in Vietnam I stayed stoned on marijuana as often as possible. As a young teen in Duluth I had openly wept when my faithful Black Lab, Duke, had to be put down; now in Nam as fellow troops directly in front of me or behind me stepped on mines that blew their legs off, I would avert my eyes and mutter, “Better them than me.” While growing up near Pike Lake I honestly loved and respected my mother and only occasionally teased my little sister Patty; while learning how to be a man in Vietnam I was ordered into enemy villages where at nineteen years of age part of my duty to my country was to gun down women and children. That disconcerting gnawing I had initially experienced had all but stopped after several months in Nam.

Many of us spent so much time trying to stay alive physically that perhaps we didn’t realize we were gradually dying emotionally. How does a young man deal with the atrocities he sees during war unless he shuts down inside to protect himself?

When my tour in Vietnam was over and I was preparing to return to the States, I still possessed my arms, legs, hands and feet. Aside from a slight shrapnel wound, a mild case of malaria, a rat bite on my finger and the ensuing, excruciating abdominal rabies shots, I was undamaged. Aside from a severe case of dysentery that had transformed my muscular, 190 pound body into a gaunt and hollow-eyed 142 pounder, I was intact. At least I thought I was.

When we landed at Los Angeles International Airport for a layover on our way to Minneapolis, I was stunned to find angry, placard carrying demonstrators waiting to greet us with jeers, taunts, hurled pieces of rotten fruit, and spittle. “Stop the bombing!” they shouted. “Baby killers go back to Nam!” No ticker-tape parade, this.

Settling back into civilian life in Minnesota was fairly uneventful, I thought. I did instinctively drop to the ground a few times when a passing car would backfire, and I learned to avoid concerts with strobe lights because they stirred up a panicky feeling in me that was too sickeningly familiar. In the ten years following my return from Vietnam I got married, welcomed the birth of two daughters, learned a challenging and satisfying trade, and bought a house. Occasional nightmares seemed to be the only residue of the war that plagued me, and I dealt with them simply by wiping the sweat from my face, gulping some cold water and turning over in bed and settling my thoughts toward sleep once more.

During the few times that I allowed myself some deep and personal introspection, I came face to face with one fact over and over again: the war had changed me. Most folks who knew me probably thought I was the same old guy, but I knew that I had shut down emotionally. I had come home in one piece but was not totally unscathed like I had anticipated I would be. Some unnamed but vital thing inside me had died, and I didn’t know how to resurrect it.

I found myself angry when I shouldn’t have been, and flat when more emotional responses were called for. I became a high-functioning, hard working young man with everything I’d ever wanted….everything, that is, except a sense of happiness and peace. Peace had seemed to elude me in my youth, peace certainly wasn’t a close companion in Vietnam, and now at 30 years of age, peace was still nowhere to be found. Important relationships began to suffer and drugs and alcohol usurped their place in my life. Driving home from a bar one night I was so drunk I couldn’t keep my eyes open, so I steered with one hand, and propped open one eye with the thumb and index finger of my other hand. To say that things were spiraling downward would be an understatement.

I grew up in a home with a devout mother and I had also dabbled in Buddhism, but for the most part I had always disdained religion. So in 1978 when a new friend named Neal told me that “Jesus was the answer to every question I’d ever had,” I was skeptical at best. I believed that Jesus was a great holy man, a prophet and an important part of world history. But my perspective of Jesus was of him hanging on a cross, looking as dead as I felt. What could Jesus do for me? Could he heal the wounds I’d received in Vietnam? Could a dead man hanging on a cross bring another dead man back to life? I didn’t think so, but despair had taken hold and I found myself willing to ask this Jesus to prove himself to me.

I said a simple, genuine prayer, asking Jesus to do something with my life, and something I now know was a miracle happened. Gradually, I was no longer drawn to drugs or alcohol. I began to understand the Bible when I picked it up to read. I felt new flickerings of compassion for other people. Tears were a welcome, frequent occurrence. Even though life was still difficult in many ways, I knew what peace meant for the first time in 30 years. I had an encounter with a living Jesus and He breathed new life into an emotional corpse. Some things He healed instantaneously, some things He has healed gradually over a period of years, and some things He is still healing as I learn to walk closely with Him.

The end of the Vietnam war brought so many dark memories to my mind, and I ached for my fellow veterans and their families whose lives have been forever altered because of it.

As for me, I can say that what was meant to destroy me eventually led me to the place of my healing: into the arms of Jesus Christ.