Now all we need is a fire

I have always loved a good fire in the fireplace. In my childhood home in Southern California, we had a fireplace in the living room, but my mother didn’t like using it. Granted, we rarely needed a fire in the hearth since our weather was almost always warm, but on those infrequent rainy days I always asked if we could build a fire. She usually said no, because the ashes and the wood chips were just too much for Mom to deal with. She relented on Christmas, though. Almost every Christmas morning, even though it was often 70 degrees outside, we burned our Christmas wrapping paper in the fireplace and I would kneel by the blaze and watch, happy and contented.

It’s one of the reasons I love living in Minnesota, even though sometimes the bitter cold gets to me. I love snow and the smell of woodsmoke in the air, and I love a good fire to warm our feet by. In the house we lived in for 24 years, we used our gas fireplace a lot. Unfortunately, building a roaring wood fire in a large open fireplace when it’s below zero outside, really serves to make a room ultimately colder. Most people who live in cold climes know that a blaze in the firebox can create a powerful draw, sucking the warm air out of the room and up the chimney. I think that’s why many people here opt for wood stoves or gas inserts in their fireplaces.

Anyway, we have two fireplaces in our house, and both are closed at the damper and capped off at the top of the chimney — isn’t that just a little bit sad? We had plans years ago to have gas inserts installed in both fireplaces, but now we’ve put those plans on the back burner (ha) and probably won’t do that since we plan to move next year, if possible. But we still love our fireplaces, even if we don’t literally warm our feet by them.

When we first looked at this house, we knew it needed a lot of work to make it something that would suit our family and business needs, and when I saw the fireplace in the living room, I thought it called for something more.

Here’s a photo of the fireplace (and our friend Danny) on a day we toured the house, still unsure about whether we would buy it: 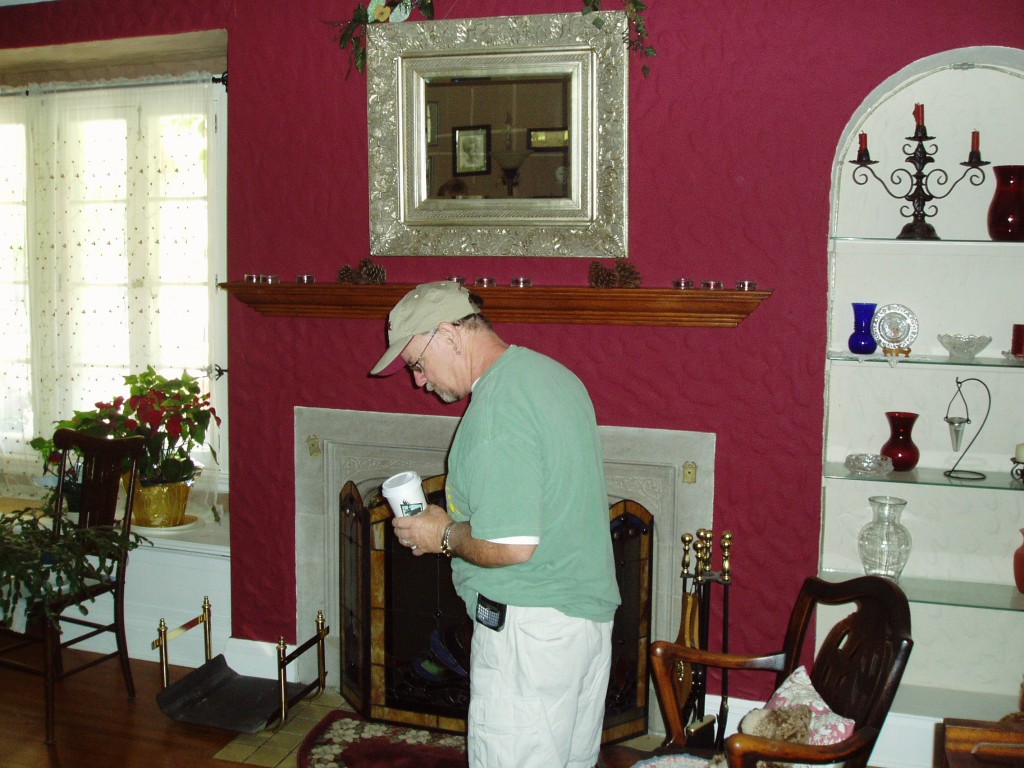 See how there was no mantel or surround around the fireplace? There was just a simple little shelf, and I thought the beautiful carving on the fireplace called for something more grand than a shelf. We also had the glass-shelved bookcase to the right of the fireplace removed, to make the corner of the living room someplace we could put a comfy chair. You may also notice the bumps on the walls, which I called Bubble-wrap for Giants — we had the whole room replastered so these bumps would not drive me to distraction. 🙂 The house was built in 1925, and apparently this was a plastering technique very in vogue back then.

Here’s a photo of the fireplace after we had lived here several months: 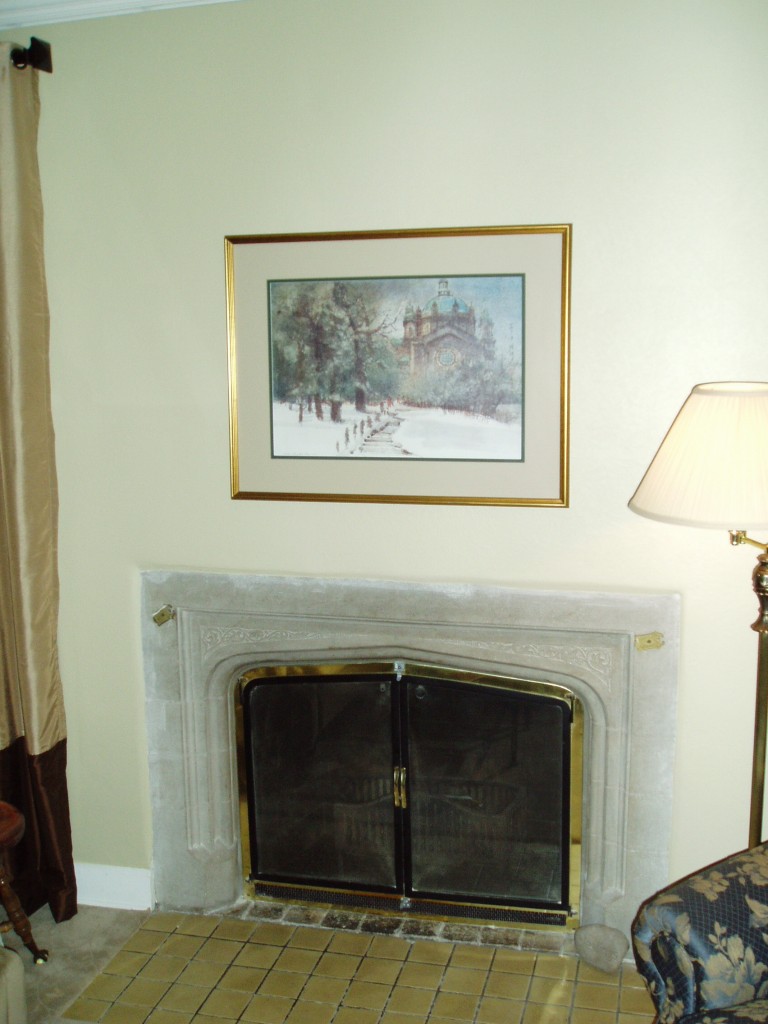 It was rather plain-looking, but the huge bumps were gone and the bookcase to the right had been filled in, making room for an overstuffed chair in which to read.

I kept trying to find a simple fireplace surround that didn’t cost an arm and a leg, but ours would require special measurements, because the wall to the left of the fireplace is narrow and borders a window seat. Most large fireplace surrounds I found had vertical pillars that were too wide.

I forgot about it for a couple of years, and then when we made the decision to move sooner than we had originally planned, I knew the living room would need a fireplace surround. It’s the focal point of the room, and needs a more substantial visual anchor. A few months ago I found a surround online that seemed like it would fit perfectly and was about a third of the cost I had anticipated, so I sent for it.

Here is how it looked right after it was installed: 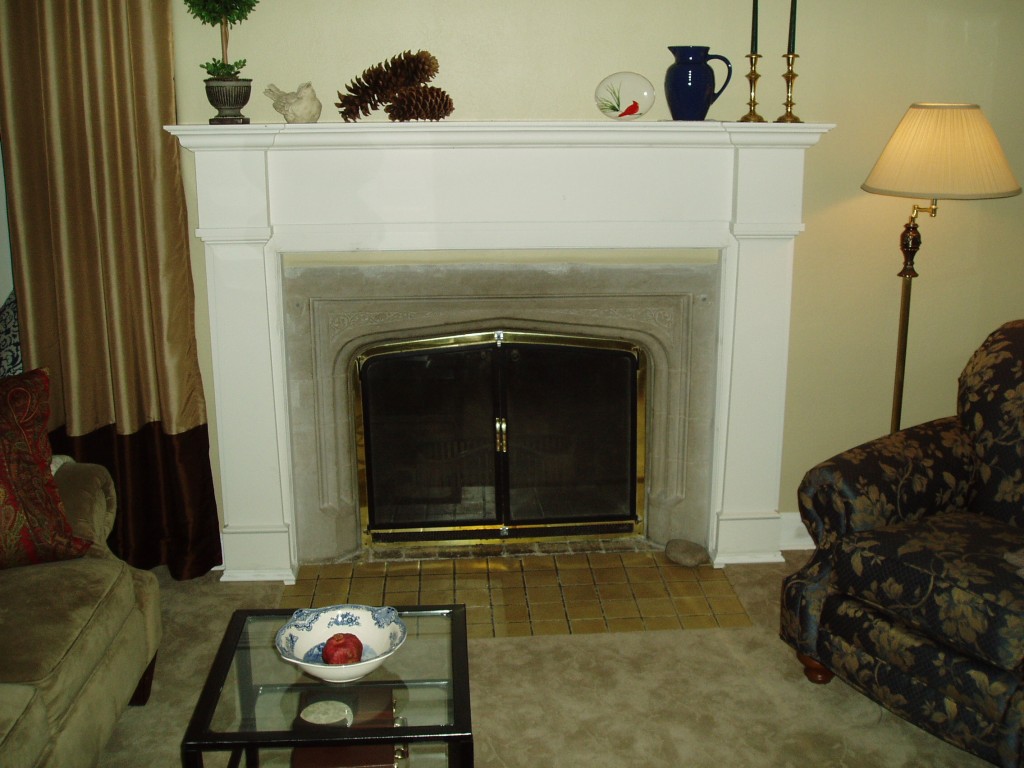 We hadn’t hung anything above it yet, and just started experimenting with what we’d put on the mantel shelf, but already I loved the look better than the little brown shelf that had topped the fireplace before.

Here’s how it looks today: 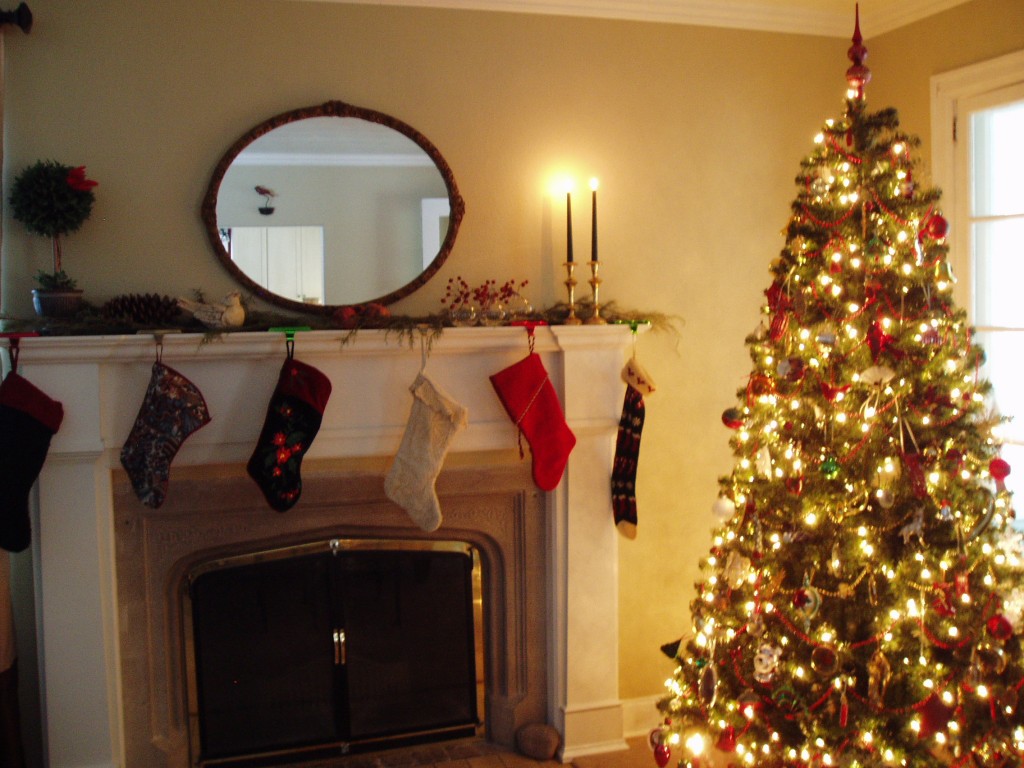 The surround is only primed right now, and after the holidays I plan to paint it a creamy white. I also have a pretty wooden applique I will affix to the horizontal part before I paint, hopefully giving it an older look.

Michael and I sat on the couch together last night and enjoyed some softly playing Christmas carols and the comforting glow of the tree lights. We both like how the fireplace surround turned out. But I couldn’t help but think how nice it would have been to have a real fire in the hearth.

One can enjoy a wood fire worthily only when he warms his thoughts by it as well as his hands and feet.

We are under another winter storm warning today, with up to seven inches of snow predicted. All we need now is a fire.