Back at the old house, I once remarked to my son-in-law Jeremy that there should be a toile wallpaper with Miniature German Schnauzers on it. Because along with the various people always drawn on toile who sit on swings, pull wagons, draw water from wells, and fish off of quaint stone bridges, toile patterns usually feature goats, chickens, frolicking dogs, and even donkeys. Jeremy is a phenomenal artist and I told him he should draw a pen and ink likeness of our Schnauzer Edith on our toile wallpaper.

A few weeks later I was getting ready for bed and my eye caught something on our toile wallpaper that I hadn’t seen before – Edith, our Miniature German Schnauzer! Jeremy had drawn her sitting at the knee of one of the languidly reclining women figures on the wallpaper, begging for a pat on the head from said woman. 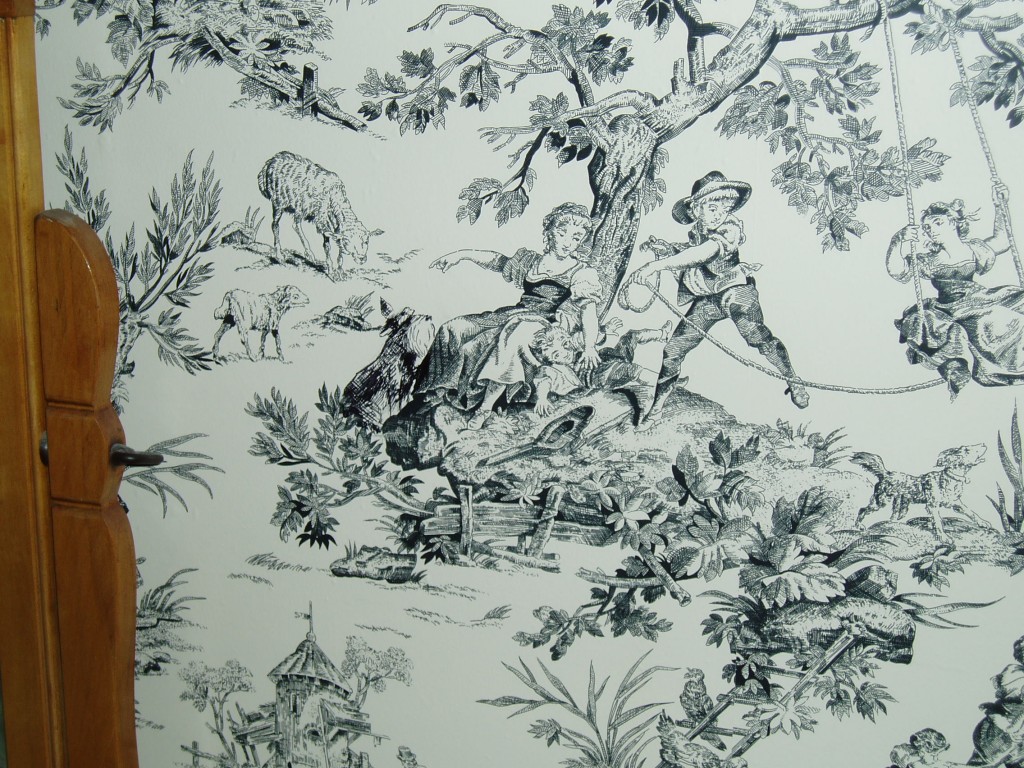 I was delighted! What an amazing talent Jeremy has. I called him up and thanked him for the pen and ink drawing of Edith, and he asked, “Did you find the other ones?”

“Other ones?” No, I hadn’t noticed other drawings, but of course Michael and I began to scan every square foot of our bedroom wallpaper to see what else Jeremy had drawn there.

It took several minutes, but on a different wall to the left of the window, we found this drawing of Edith, having some kind of canine interaction with one of the dogs already on our wallpaper. Edith has a strange ear that doesn’t flop down like the other one does – it stands up like an Orca fin all the time and Jeremy even captured that little anomaly of hers. 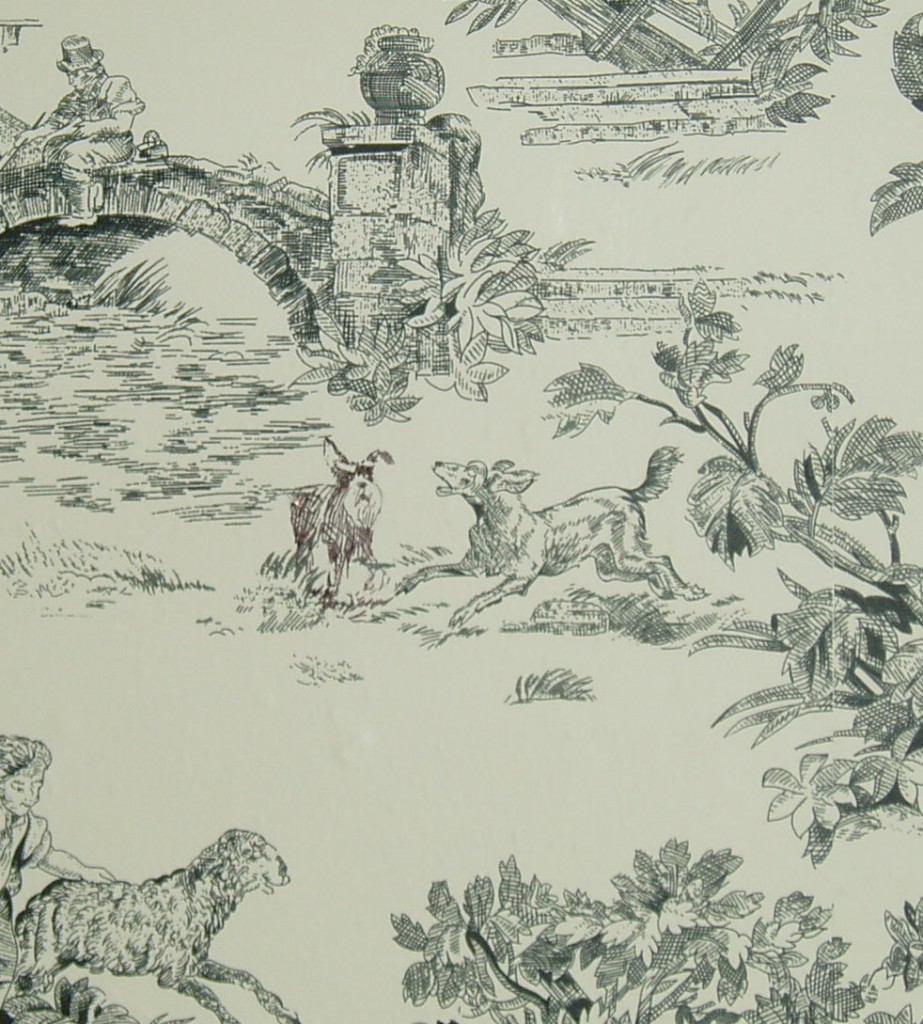 Of course by this time we were on a Schnauzer-hunt, and it took a long while to find the third drawing Jeremy had done – this one was up high near the ceiling. You can see that long-suffering Edith is sitting by a ladder and a chicken is pecking at her ear. It’s the ear that won’t fold down as it should, and we think this chicken knew it was a deformity and was trying to correct it for Edith.(You know how chickens are – they have a tendency to henpeck.) As is clearly evident in the drawing, Edith is not particularly pleased by this chicken’s assistance. 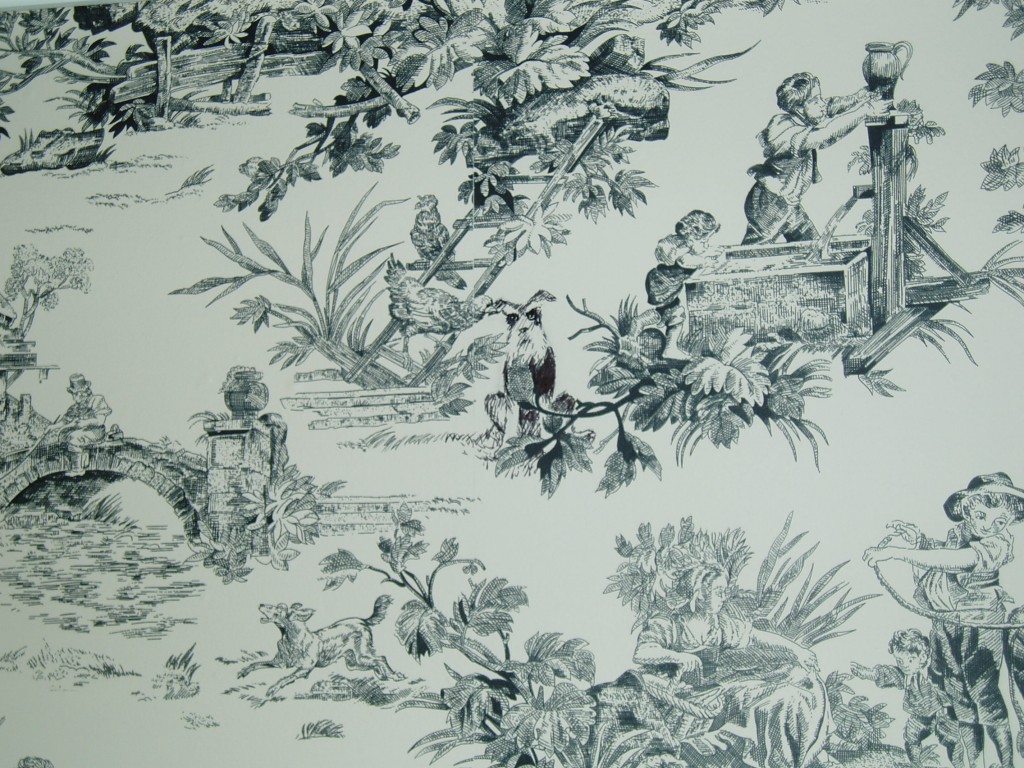 Over the years I would always smile when I looked at these amazing drawings Jeremy did. No one would have ever known they were there, since they get lost in the busyness of the toile. When I pointed them out to people they were always astounded at Jeremy’s artistic gift, and they loved the whimsy of us having our own Edith the Schnauzer added to our wallpaper.

Well, now we don’t live in that house anymore and of course we had to leave the pen and ink Ediths behind. Last week we closed on the sale and met the new homeowners for the first time. They were both friendly and so warm and complimentary, and we were happy to see that they seem to love the house as much as we do.

I’ve been wondering though. How long will it take them to notice that there are three little drawings of one beloved little dog that have been added to their bedroom wallpaper?

I hope I can talk Jeremy into putting some new Ediths up on our new black and white toile wallpaper. And we have a second Schnauzer now – her name is Mildred and we usually call her Millie. Hopefully she’ll make an appearance in pen and ink someday as well.

Along with all the photographs we have of our children and grandchildren, we also believe in immortalizing our dogs.