For those of you who have never met my husband Michael, he used to have quite the build. Not that he doesn’t look nice now, but when he was a young man he had the kind of muscles and broad shoulders that most men must lift weights and pray hard for.

I always thought Michael’s broad shoulders represented more than just hard work and good heredity. To me, they were symbolic of the kind of man he had to be to take on the job of being my husband and a daddy to my two little girls.

Thirty years of marriage has shown me just how strong his shoulders have been. You could say that Michael has had a high-maintenance wife. You could say that raising the little daughters of a man who easily walked away from them was a challenge at times. You could say that doing decades of carpentry for 10 hours a day in every kind of weather gave him strength and stamina.

I think the best proof of Michael’s strong shoulders is how humbly and cheerfully he has carried us and loved us for all these years. We have not been the lightest of burdens for a man. No indeed. In fact, if any other man had decided to take on what Michael has, he probably would have eventually given up.

Michael has never given up.

Back in April, Michael had one of those strong and broad shoulders replaced at the Mayo Clinic. 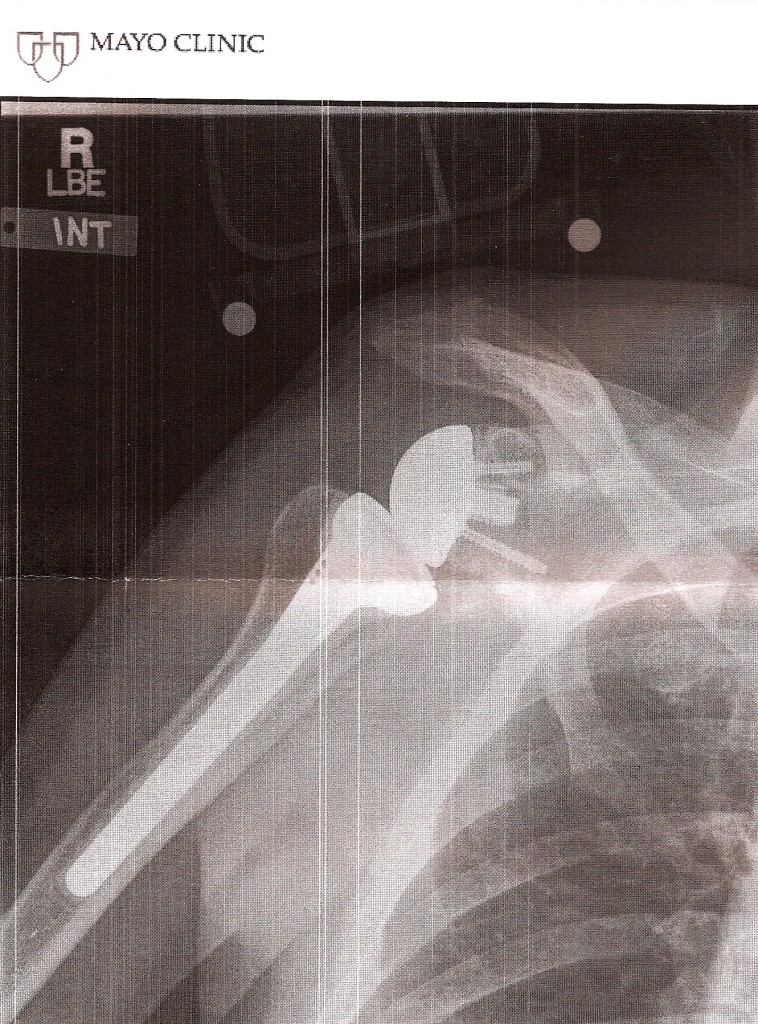 Predictably, his right arm and shoulder have atrophied a bit and he’s had to undergo weeks of physical therapy to build his strength and mobility again. He will have to be careful for the rest of his life. No heavy lifting, no shooting rifles during hunting season, no push-ups.

We recently made our last trip to the Mayo Clinic and the x-rays showed that the new reverse prosthesis that is Michael’s new shoulder joint is “articulating well” and looks just as it should. The orthopedic surgeon who did the replacement was out of town for this appointment, and we met with his young Physician’s Assistant, Lori D. She was tall, beautiful and brilliant, and she showed us the many x-ray views that had been taken that morning, dispassionately tossing around words like circumduction and glenoid process. She answered our questions knowledgeably and was polished and professional; she knew the ins and outs of Michael’s case. We learned that the lingering shoulder soreness Michael has each day probably isn’t related to the sawed off bone and new metal and plastic prosthesis, but to the muscles and tendons that will now take up to a year to fully heal. It was comforting to know that.

As we shook hands and said goodbye to P.A. Lori D. at the Mayo Clinic in Rochester, MN, I wished I had the time and opportunity to tell her more about Michael’s broad shoulders.

She knew more about his glenohumeral joint than I ever will. But I could have told her a few things about what life is like with a man who’s as strong on the inside as he is on the outside. Probably stronger. I could have told her about all that Michael’s broad shoulders have carried, and how countless lives have been blessed beyond measure because of his strength.

I would have told Lori D. that when Michael was a younger man he used to be powerfully built. And I would have said that in spite of his fading physical strength, he’s still fearlessly carrying us around with his amazing inner strength. And only the most indomitable man could do that.

I’m not sure that Lori D. would have seen what I’m talking about.

But I can see it clearly…every single day.