Girl From the North Country

No, I’m not the girl from the north country. Bob Dylan had someone else in mind when he wrote that song a long time ago.

“Girl From the North Country” is the name of a yarn colorway that my daughter Sharon designed. I saw all the denim-y blues and the subtle shades of turquoise and gray, and the hints of green and even lilac, and I snatched up the yarn in about four seconds. I’m still a beginner knitter but I’m really enjoying it. I don’t know when I’ll ever graduate from making scarves to trying something more complicated and attempting to read a pattern — probably when I’ve knit a scarf for every person I know, which might take some time.

I can do the stockinette stitch, the garter stitch, and am making this current scarf in a ribbed pattern for someone I love very much. I held the yarn up to her eyes and it matches perfectly. If ever the Minnesota driver’s licenses allowed enough room for her to put under eye color: “grayish-greenish-aqua-blue,” then Carolyn could claim that description for her eyes and it would be perfectly true.

Here’s a photo of the scarf almost finished: 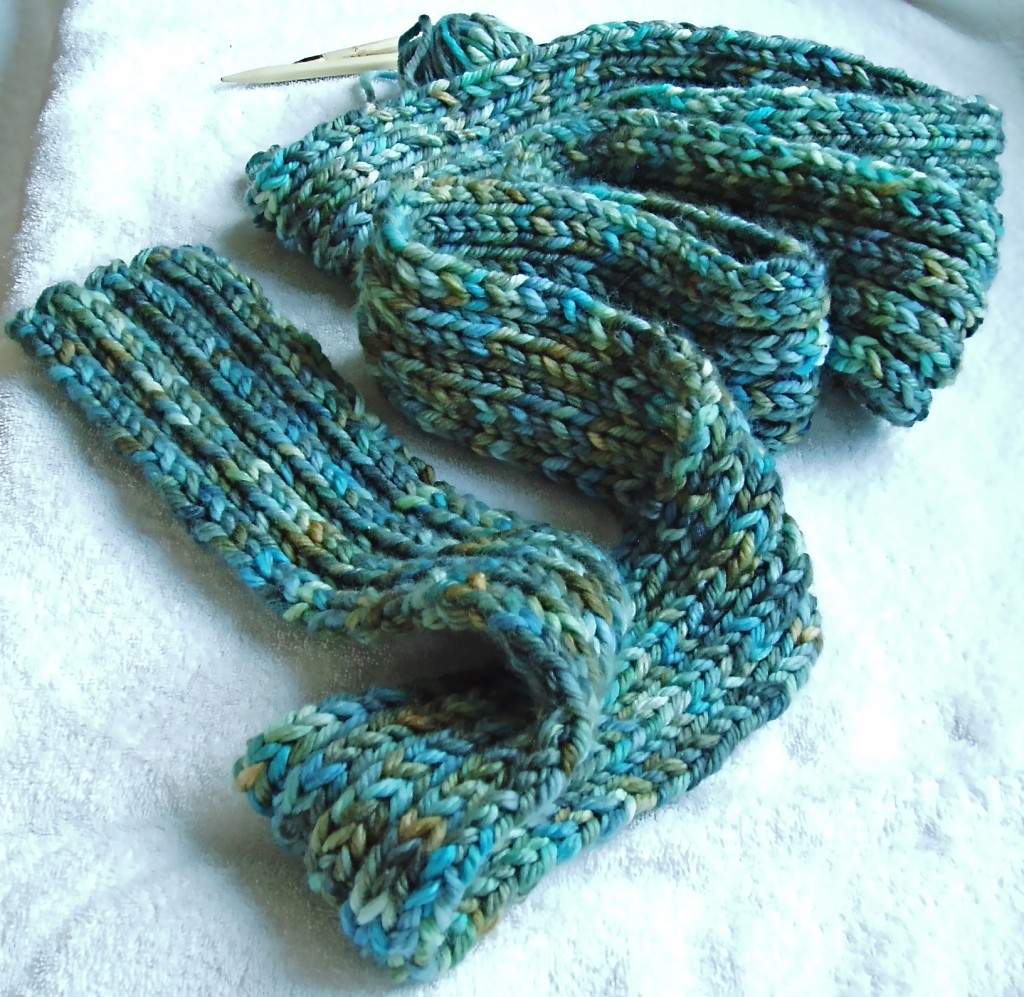 Yarn photography isn’t easy and this shot doesn’t do the “Girl From the North Country” yarn colorway justice, but it’s the best I could do with an old digital camera that temperamentally turns off and on of its own accord as I’m trying to take flashless pictures.

This scarf has a few design elements in it that will surely give it some character. I hope Carolyn will wear it this coming winter (yes, it’s currently April in Minnesota, but snow and below-zero temperatures are on their way; they’re always on their way in this part of the country) and feel wrapped in warmth and her mama’s love.

And now, back to Bob Dylan. I’ll bet most of you didn’t know that Bob and my husband Michael are cousins. I should try to figure out someday what degree of cousinhood they share — is it second cousins once removed? First cousins thrice removed? Third cousins nothing removed? We don’t know. Robert Allen Zimmerman was born in our city and grew up about an hour northwest of where we live. We have never met him and I’m sure Bob doesn’t have any idea that we have his huge family Bible in our possession. It’s full of various and sundry Zimmermans he would be well-acquainted with. Michael’s paternal grandmother was a Zimmerman, and somewhere in that weird and creative gene pool we are linked to the enigmatic man who wrote “Blowin’ in the Wind,” “Mr. Tambourine Man,”  “Gotta Serve Somebody,” and countless other songs.

This lovely colorway that Sharon dyed is one of her one-of-a-kind creations and isn’t available on her website. But I told her I thought she should reconsider and try offering “Girl From the North Country” as a regular yarn. I don’t know if it would be a big seller or not, but I would guess that girls from the north country might like it a lot, and maybe even Bobby Zimmerman might hear about it and buy a skein or two.