Hello friends, how are things for you these days? Sometimes it’s hard to know what to say when conditions in the world are as they are. While people are being bombed and are dying, evacuating to who-knows-where, while the world is still wondering if the corona virus really is waning a bit, do we talk about our dogs? I don’t know.

But because I can’t serve the people in my life very well if I’m under the covers 24 hours a day, I guess I’m still trying to live my simple and dwindling life, give my thanks to God, pray every day, buy books for my grandchildren, and sit down at the computer and say hello.

Back in January our little Schnauzer Mildred began having neurological issues and some very bad days. We even got to the point where we made an appointment to take her to the vet to say our goodbyes. But Millie rallied a bit. Her bouts of trembling and tremoring and falling over (possibly vestibular syndrome, but also certainly because she is 96 in dog years) eased a bit, and we cancelled the appointment. She is still so frail, but her appetite is good and she obviously still has a few joyful days yet to live. Sara is Millie’s person. Her allegiance was transferred from Michael to his youngest daughter the day he died in 2015. Millie lives for Sara to come home from work or nursing school, follows her around like a puppy dog. Probably because she is a puppy dog.

Sara coddles Millie like you can’t believe. And I think it’s pretty cute. Here’s a picture from this morning. Millie sleeps in Sara’s bed and when it’s cool in the house she prefers to be covered by an Asian-inspired duvet cover. And her little scruffy head is resting on a pillow. I think she looks like a baby wolf in this photo. 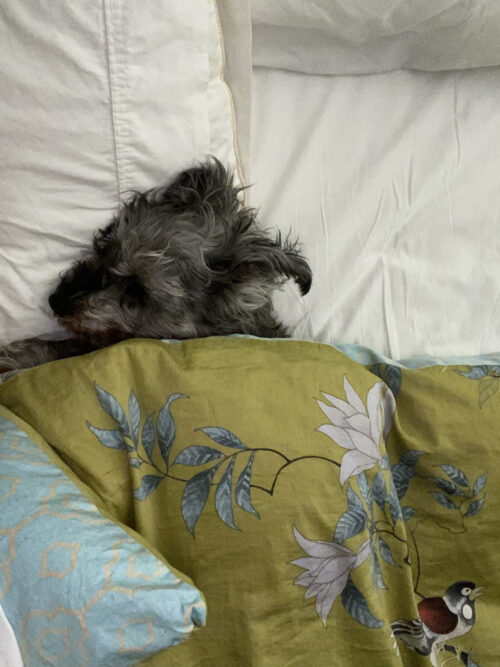 I watched a PBS show recently on our Milky Way, and had no words. How can we wrap our minds around the size of just our one galaxy, not to mention trying to fathom the other possibly trillions of galaxies we now know are out there? What kind of power does God have to create such vast beauty and sustain it all in perfection? What kind of God is this who is so huge, yet He still focuses His loving eyes in on us, His tiny people on the particle in space that is Earth? The challenge for us is learning to accept His timing, remembering that He often works in the dark without telling us what He’s up to. It helps me to remember His trustworthy character, and how faithful He has been to me in the past, so I can rest while seeing such unrest everywhere.

I woke the other morning at 4:00 and didn’t want to get up that early, so I laid there and thought about this as much as I could. It brought tears to my eyes, Someone so holy and powerful and sovereign and enormous, bending down to listen as I cried and lifted my concerns to Him.

I came across a familiar verse not long ago and it shimmered a bit as I read. “And we all, with unveiled face, beholding the glory of the Lord, are being transformed into the same image from one degree of glory to another. For this comes from the Lord who is the Spirit.” 2 Corinthians 3:18.

I’m sure there are more theologically precise interpretations, but what I saw in that verse was this: if I keep beholding the glory of the Lord, which I find in His creation, the night sky, His Word, in my grandchildren’s beauties and uniquenesses, in trees and birds and language, in mercy and patience and kindness and truth, over and over again with great intention and worshipful focus, I can be changed into someone more like Him. It’s going to take longer than a lifetime, because I am more resistant to transformation than I even comprehend, but He is able.

I saw in that verse that it’s actually profitable to gaze at, to behold His glory again and again. I have recorded every Nova and Nature program from PBS for years. I knew they all made me cry and want to put my head down on the ground in awe and gratitude, but now I see that the apostle Paul was inspired to tell us that kind of beholding can actually change us.

I’m also still watching three eagles’ nests every day when I’m in my office doing foster care paperwork, paying bills, answering emails. Jackie and Shadow in Big Bear, California have an eaglet who is thriving. He/she is being fed by both parents 8-12 times a day, and the camera is so close and of such good quality, it feels like I’m perched on that tall tree myself, watching God’s handiwork. 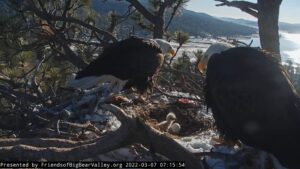 I have watched for weeks now as both bald eagles have patiently and calmly incubated the eggs, sitting quietly, watching the world around them. They are unhurried, unworried, serene and beautiful as they do what they were created to do. When Jackie changes positions, she tenderly turns the eggs with her beak, then straddles the eggs, carefully folding her talons in so she doesn’t puncture anything. Then as she settles over the eggs she rocks from side to side to get all those downy feathers spread over her treasures to warm and protect them. There is only a sense of peace and quiet purpose, and waiting. I would even say waiting on God. Because the eagles don’t form the chicks inside. God does. The eagles just do their part and He takes care of the rest. Oh, surely there’s a lesson there.

So I then turned to Psalm 91 and read this:

“He who dwells in the shelter of the Most High will abide in the shadow of the Almighty. I will say to the LORD, ‘You are my refuge and my fortress, my God, in whom I trust.’ He will cover you with His feathers; under His wings you will find refuge; His faithfulness is a shield and rampart.”

That little bobble-headed eaglet abides under the shadow of his parents’ feathers and wings. They keep him safe from the ravens who circle, looking for an opportunity to snatch him. They give him refuge with their wings. They have been taught by the God who spins the Milky Way and every other galaxy how to faithfully care for their young.

Should I be as calm and secure in this groaning world as that fuzzy little eaglet is in his nest so high above Big Bear Lake? I can only pray, “Oh Lord, help me to rest in you. To trust in you so completely that I live in the peace Jesus died to give me.”

I’ve been listening to my daughter Sharon’s podcast. My guess is that if your child had a podcast you would listen to it too. Sharon is my oldest daughter, and she had my middle daughter Carolyn on recently, as they discussed some “brain tingle moments” about the state of Washington. I had to laugh when they reminisced about their childhood, and I learned a few things I never knew. 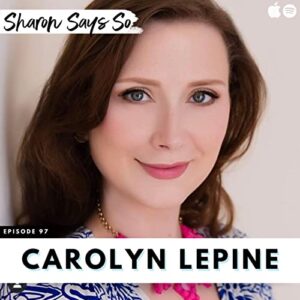 Then I listened to the episode where two members of Congress were on the podcast (called Sharon Says So), and felt like cheering. Dean Phillips is a Democrat and Brian Fitzpatrick is a Republican, and they became friends in spite of their disagreements, reaching across the aisle in a spirit of kindness and collaboration, and challenging others to do the same. These men have actually quietly spoken to members of Congress who are acting poorly, saying things like, “If your behavior here would make Putin happy, maybe rethink what you’re doing.” I felt hopeful after listening to these two men share about the respect they try to offer as they serve in their elected capacities. 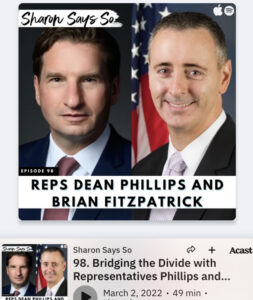 The sun is coming up over Lake Superior now, so I had better get ready for the day. I have a kitchen to clean, laundry to fold, my CBS lesson to do, foster care paperwork to catch up on, books to read, prayers to pray.

I hope today you can behold some of God’s glory and feel His love and mercy at work in you.

May God bless and keep you,