Several months ago I received a disconcerting phone call. It was from the supervisor of one of the people we care for and have regular contact with, and she wanted me to know that T. had possibly been exposed to head lice. **Groan** Someone at T.’s work had lice, and that person’s coat had hung on the coat rack next to T.’s coat. So they just wanted us to know, so we could be aware. Because their coats had touched. Possibly.

Well, that was enough for me, and my mind went into overdrive. As soon as T. came home, I sat her down and started checking her hair and scalp. Mind you, I didn’t know what I was looking for exactly, but I thought if I looked closely enough I’d be able to see either A) little eggs, or B) a tiny live louse or two having a heyday. I didn’t find anything, but then again I wasn’t sure what to look for, so of course I went online and did some research. (A word of caution: if you like to sleep well at night, don’t go online and look at large magnified photographs of lice and their eggs.)

The more I looked, the more unnerved I became. We can’t get lice, not with all the people we have in our house! I checked everyone’s scalp and hair, looking for any sign of eggs. I checked pillows and blankets. I pored over hats and collars. Every little piece of dry skin, every flake of dandruff, each speck of lint on pillows I found, was scrutinized. Then I looked at more pictures online, but I still wasn’t certain I knew how to identify what I was looking for.

That evening, I started to itch. Badly. I scratched my head a little and tried to put thoughts of lice from my mind. That worked for seven minutes and then the itching grew in intensity and finally just became constant. I tried to look at my scalp by holding a hand mirror and standing close to another mirror, but I am “visually challenged” and couldn’t see anything but my own hair. By the time I went to bed I was certain that I, myself, had a massive and teeming lice infestation and soon the whole house would have to be tented and fumigated by a pest control agency. (As Dave Barry says, I am not making this up.) I was almost in tears. I had Michael look carefully to see what he could find, but he couldn’t see anything either. I slept fitfully that night and woke up just as itchy the next morning.

There were only three options, as I saw it. One was to panic and assume there were now billions of lice in every nook and cranny of our house, and head to the drug store to buy a case of nerve-toxic delousing liquid, and treat every person in our house immediately. Option Two was to try to use mind over matter, restrain myself from gouging and violently scraping my now-tender scalp, speak firmly and authoritatively to myself and say, “Julie, there are no lice here. Get a hold of yourself!  T. doesn’t have lice, her coat doesn’t have lice, you don’t have lice, no one else in this house has lice, and you can relax now and move on.” Option Three was to call my friend Carey.

I remembered that a few years ago, Carey’s young son had gotten lice. They found out that he got them by putting on a hat that had just been on someone else’s head who had lice. Now, everyone knows that lice like to pay social calls to the nicest and cleanest of people. Having head lice doesn’t mean that someone hasn’t washed their hair, kept their house spic and span, or made personal hygiene a top priority. Usually a lice infestation means that a person was in the wrong place at the right time, as in the case of Carey’s son. To the person who has lice, this is small comfort.

Well, Carey did everything a good mother would do. She treated her son right away with the lice-and-nit-killing shampoo, and then compulsively went through his hair with a nit-comb sixteen times a day for the next three weeks. She checked her husband, her other children, and herself. She found a couple of nits in her own hair, so then treated herself. She didn’t rest until she was certain the last louse and/or nit was dead and gone from her home. It wasn’t a fun time, and I remember feeling so sorry for what Carey and her family were going through.

But now because of her experience, in my estimation Carey was a Certified Lice Expert. The next morning I called and told her about the phone call from T.’s supervisor. Carey patiently explained to me what I should be looking for, how the nits were not white and round, but were slightly elongated and like teeny, tiny beige grains of rice stuck to the hair follicles. I got off the phone and searched again, but every microscopic light-colored fleck in my house now looked like a louse egg to me. My head was so itchy and I was growing more miserable by the minute. I finally called Carey back and asked her in a voice of quiet desperation, “Carey, can I just come over and have you look at my head to see if I have lice?”

“Of course you can!” she soothed, so I grabbed the car keys, waved to Michael and headed out. In the time it took for me to drive to Carey’s house, she had gathered and set up all the essential tools for detecting whether or not I was a lousy friend, and was waiting for me at the front door when I arrived.

She had this huge magnifying glass with a bright light attached to it, she had a chair set up under the light, and she had the nit-comb in hand, which she had needed for her son years before. I sat down in the chair and braced myself. Carey was a Certified Lice Expert, and in a few minutes I would find out if The Bugs of Doom had taken up residence on my scalp, and therefore my pillows, car, carpets, beds, house, yard and neighborhood. Carey parted my hair and peered closely. She parted it again and again and examined every part of my scalp, methodically and gently. And may I add, compassionately, because she knew what kind of a dither I had worked myself into. At one point she said, “Oh, Julie, you’ve actually scratched some raw spots on your head.” I thought to myself, blood and scabs I can deal with; lice I cannot.

After about twenty minutes of careful examination, Carey straightened up and announced that I did not have head lice. What relief! What a burden lifted! I could resume my life now, and I thanked Carey profusely for being the kind of friend who would drop everything to dig through a friend’s hair to hunt for blood-thirsty insects.

It took over a day for my nerve endings to get the message that it wasn’t necessary to itch anymore. Even though my mind was at ease, I found it interesting that it took some time for my body to follow. I checked everyone in our household again and never found anything, thank God. And I was amazed at the power of suggestion, how just a hint of the possibility of something brought real symptoms.

Carey and I have laughed about this little episode in our friendship, the memory of me sitting helpless in her living room while she hovered over me, digging through my hair. Even though it gives me the heebie-jeebies to think about it, I’m grateful for her. I know that she’s the kind of friend I can turn to when I’m really feelin’ lousy. 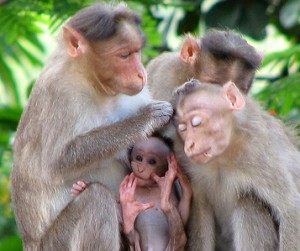 A few days after my scalp had quieted down and things were back to the blessed ordinary, I sent Carey this picture by email to express my appreciation for how she had ministered to me. Oh, we’ve gotten more than a few chuckles out of this photo! (That’s Carey on the left, and I’m the one with the white eye-shadow. I can’t remember who the other two are.)

I told her that it was a photo of the both of us, and I titled it “True Friendship.”   🙂