One year ago today my husband of almost 34 years met his Savior face to face. I can hardly believe it has been a year since I’ve seen him. In many ways it seems like just a few months.

In honor of Michael’s life, his homegoing, and how much we love and miss him, I’m republishing the posts from the week of his dying here.

This picture was taken by our daughter Sharon and is my favorite of Michael as an older man. Oh, to have been loved by him! I will forever praise God for that. 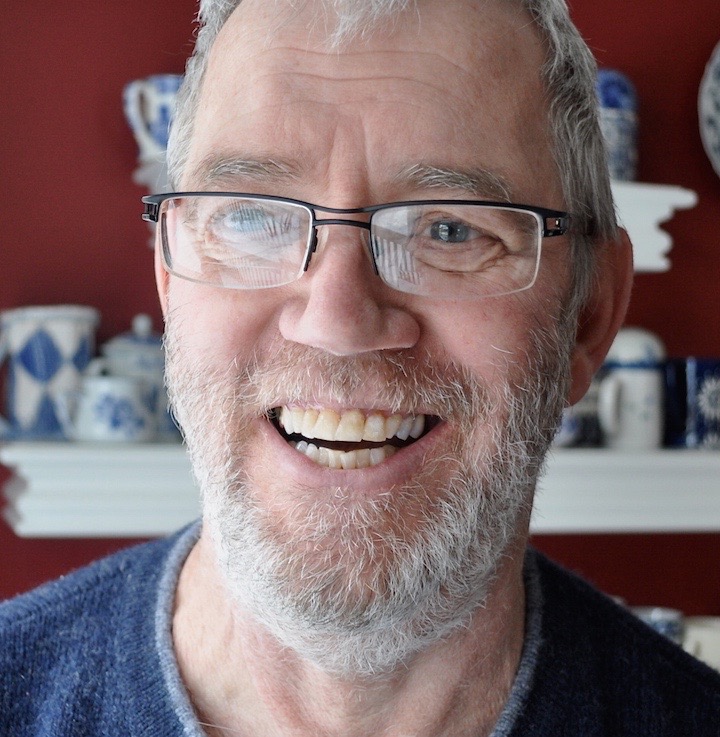 Sharon, Sara and I took turns getting up with Michael on Sunday night and early Monday morning. Carolyn had gone home with baby Miriam and asked that we text her when the end came, no matter what the time. I believe I got up at 1:00 a.m. to turn Michael, moisten his mouth with cool water from an oral sponge, give him a dose of liquid morphine to help ease his awful, labored breathing, kiss him and stroke his burning hot skin, and climb back under the covers to rest until the next time. Sara’s turn was at 2:00 a.m., and Sharon’s was at 3:00 a.m. And as I mentioned before, we weren’t actually sleeping in between times — lightly dozing might be a better word. Michael had lived through Sunday and we didn’t think he would. Every prayer I breathed now was that God would take him home.

Sharon got up to minister to her dad at 3:00 a.m. and around 3:05 I heard her whisper to me, “Mom! I think Dad is going….” I jumped up out of bed and leaned close to Michael on his right side, and Sharon was on his left. Yes, that ghastly, chest-compressing breathing had stopped, we thought. But then in about 20 seconds Michael inhaled deeply again, and this breath was different than any others had been; it was a remarkably long, quiet, lung-filling inhalation, followed by a long, whisper-quiet peaceful exhalation.

And that was his last breath on this earth.

I wished I could have seen his spirit leave his broken body, the precious vessel I’d loved and depended on and clung to for almost 34 years. I have heard of many credible people who have experienced out of body experiences when they were dying, explaining how their spirits seemed to rise out and above their body, and how they could look down and see their body below, on an operating table or at a roadside accident. Obviously some have lived to tell about this phenomenon when their physical lives were saved and their spirits returned to their bodies.

At the moment of Michael’s death I thought of this, and there in the dark as I laid my head against his chest and the tears fell, I looked up toward the ceiling above him and waved goodbye. I don’t know if he saw that or not, but I’d like to think the huge angelic escorts who were carrying him to heaven paused long enough for him to see his grateful wife waving at him from down below, and that somehow he knew that my heart was going with him.

Sharon and I woke Sara up, and for a while we sat with Michael’s body, and I think we were all just so grateful his suffering was over.

Oh, how much he has taught us, even (or especially) in the midst of 11 years of the ravages of Parkinson’s disease. No one has taught me more about praising the Lord than my husband. His life was a ministry of praise. He even praised God when he was crabby! His life also spoke volumes about trusting acceptance — he did not complain. He never wanted to be the center of attention and was not a self-focused man. He knew how to love people and treat them kindly. He was a giver. He was a hard worker. He believed in Jesus and his life reflected that beautifully. And I feel blessed beyond measure to have had his love.

The hospice nurse had told us that when Michael died, we didn’t need to feel any rush to call the funeral home. I was grateful for that “permission,” because I was not in a hurry to say goodbye to his body. We were finally able to recline his bed a little (this had not been possible before as he would immediately begin to have more difficulty breathing), and we covered him and arranged his pillow, and laid down to rest a bit ourselves, even if sleep wouldn’t come.

Carolyn had received our texts right after her dad died, and she texted me back at 3:25 a.m. “The Lord giveth, and the Lord taketh away. Blessed be the name of the Lord. I am so grateful. I love you.” The love, thoughtfulness and presence of my children during this time is something I will never, ever forget, or stop marveling about.

When the sun came up on Monday morning, we were all experiencing a mixture of relief and grief. What a wondrous blessing that Michael’s suffering had come to an end, and his real life, the one that would go on forever and ever, had just begun. But our lives here without him had to go on. And he was such a treasure in our lives, we knew the void he was leaving would be huge.

For about two hours before the men from the funeral home came to take Michael’s body away, Edith and Mildred laid close to him on the hospital bed. Later on, Millie actually got very close to Michael and sniffed his mouth carefully, surely detecting that life had gone. 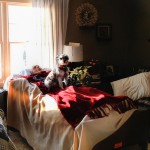 I took a picture of her as the morning sun was coming in the window behind him, as she sat close to him, ears back, very still and quiet. It seemed like she knew her kind master was gone, and she didn’t want to leave the body that had petted her and fed her and coddled her for years.

God gave our family abundant grace as we spent this day making all the necessary preparations. Sharon went with me to the funeral home to make plans for Michael’s funeral, which was scheduled for Friday, February 13th. Many of us sat together in our living room, writing his obituary with contributions from each person, and the laughter, unity, tears and gratitude we all felt were priceless. We pulled out picture albums and began to sort through hundreds of photos, so we could decide on which one to use for the obituary, and which ones Sharon would use in the slide show presentation she was planning for a tribute at the funeral. If you would like to see the newspaper obituary our family wrote to honor Michael, you can click here.

Unbeknownst to me at this time, four of my friends began to plan for the huge meal that would be served at church after the upcoming service on Friday. I still can’t think about the time and hard work such an undertaking required, without tears coming to my eyes.

It felt surreal to pick out one of Michael’s suits, a shirt and a tie from our closet to be brought to the funeral home, to actually write the date of Michael’s death, to choose songs and receive calls, and to see that empty hospital bed in our room.

Late Monday night after a very busy day, I let the dogs out as I always do and got ready for bed. When I walked into our bedroom and was reminded that I would never see my husband again on this earth, a powerful wave of grief hit me. I climbed up into that hospital bed where my Michael had finally met his Savior, turned out the light, pulled the covers up to my chin, and wept. Even the dogs sat very still on the king-sized bed, watching me as if they knew who I was crying for.

The hospital bed would be picked up by the medical supply company the next day, but on Monday night it seemed like a very sacred and beautiful place to me, almost like an altar, and there I slept, my first night as a widow.