I heard from an old friend recently. He and I have exchanged a few texts and emails over the years. He went to the same high school as I did but was a few years ahead of me, so when he was playing basketball for my dad, I was a gangly and buck-toothed nine year-old. He and I have both suffered loss, and even though we’re never supposed to rate and compare others’ losses, I believe his is the kind that carves a deep valley into a soul, never to fill up again. At least on this earth. He is a man of strong faith, so I know he knows where Comfort comes from, but even so. I think there are wounds and gashes that just won’t be made better until we are with Jesus beyond this earth someday. There is a kernel of peace in accepting that.

The people I’ve known who don’t accept that pain and loss must eventually arrive on our doorsteps, the ones who think God should come through for them, seem to always wonder why He isn’t and when He will and what have they done that no relief comes.

I point the finger at no soul. I too, have wondered why my prayers seem to be too faint or anemic to reach God’s ears, or worse, why He would hear my sobs and see my blotchy face, and not rush to help me when I was in such anguish. I understand a tiny bit about wondering.

I have also experienced beautiful and breathtaking answers to prayer. God has been extraordinarily merciful to me. 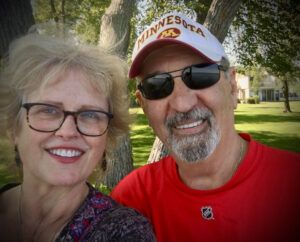 There are some losses that show up without even giving us the courtesy of being able to steel ourselves against them. A dread disease shuts down a young and vital body. A hurtling car severs nerves and mobility is lost. A long marriage, a secure job, the sense of smell, a beloved pet; who doesn’t know someone who has had to learn to navigate life when something or someone previously depended on is gone?

I am very skilled at losing relationships. My first marriage ended in a pretty quick and unexpected divorce. I was almost a baby when I naively decided that marrying someone who had not been faithful to me in courtship would somehow be faithful to me in marriage. My father, God bless his soul, actually held his tongue. While that season of heartache is something I see countless riches from now (including, hello, clarity!), I still know there was heaviness and uncertainty my two little girls should have never had to bear.

I lost the relationships that could have been with my older brothers. They both had jarring issues that prevented us all from loving each other and being close siblings, but I feel my own part in those losses, how effortless it was for me to say, “They’re not well, no one can deal with them, they’re impossible. So I won’t take their calls or answer their emails.” Which, by the way, alternated between gushing with love and admiration for what a wonderful sister I was, to being told I was comparable to an ape, a sneak who literally tried to poison their food, a thief who had stolen what was theirs. I realize how insane it seems to type those words, but alas, they are true.

I always look upon those people with loving families with a mixture of wistfulness and wonder. How in the world did they do that? How do they love each other so loyally, even though they argue and get annoyed? Did their parents plant the seeds and this is the natural harvest? Was our family just warped in some way, genetically predisposed to estrangement and vitriol?

I looooove nature shows. I have wept at the mathematical skill of the plain little Japanese pufferfish, laughed with joy at mother hippos bearing their babies to the surface for a first breath, felt paralyzed by astonishment at the color variations of nudibranchs and the ability of sperm whales to kill someone with their high-decibel clicks. I gaze at the TV screen like a wonderstruck and curious child at the zoo looking through the cages, fascinated by what she sees. What does the monkey comprehend? How can the giraffe kick so accurately? Where did the otter learn her devoted, tenderly maternal ways? Why did God make so many kinds of birds? Similarly, I stand outside the unified families I’ve observed and wondered, how did they get past that trouble? How have they stuck together for so long? What makes them want to do things together long into their adulthood? Look how they celebrate and cheer one another on, in spite of their differences! How did they achieve this? Some have had their Christian faith as the glue. Some have claimed their mother or father as the core. Others grew close because of family hardships as they were growing up.

All I know, is it has never happened with my family. I am the only one left now. My parents have both passed on, and my older brothers died in 2016 and 2020. I exaggerate not by saying they both left wreckage in their wakes. So in some ways, I’ve absolved myself of the loss of whatever relationship could have been built with my brothers, because there wasn’t a lot of stability there for a foundation.

But now I’m thinking of the loss of friends. Have you ever lost a friend and been surprised by it? I have. One time I lost a treasured friend for a few years and then God restored the friendship. I tried to learn from it and asked God to help me humble myself through the suffering and shock. Our relationship today is a blessing to me.

I lost another friendship several years ago without a word of explanation. She moved away and never contacted me again. That one was perplexing for a time, but not painful, because there were non-nurturing things she would say that I knew I was better off without.

I lost a friendship a few years ago I thought would exist until one of us died. Decades of close friendship, cards from her saying I was her dearest friend, countless phone calls sharing our lives, walking each other through valleys of death, a warm, reliable and helping hand by my side in some of my darkest times. I looked back recently over our years and years of text messages, sharing laughter and tears and the minutiae of our ordinary lives.

And then, it was done.

Contact became sporadic. Eventually my texts went unanswered. Closure is always helpful, so I wrote to reverently and sorrowfully pile up some stones of remembrance into an altar for our thirty-plus years of friendship. She wrote back and graciously told me that yes, she was laying down our friendship for a number of reasons. Some of the things she told me I’d done, she had done to me years before, yet I’d honestly let them go and thought little of them, because we were friends and she was hurting. She didn’t know. And what I had done was careless and never ill-intentioned. If she had approached me about it, I’m pretty sure I could have received it and tried to remedy it. She didn’t think we were worth remedying.

If there was one thing I learned the hard way in my family growing up, you don’t cast people aside. You don’t jettison a relationship because it gets turbulent. I hadn’t even known we were in a rough patch. Maybe I was a little self-focused and self-pitying because Michael had died after being pounded by Parkinsons and Lewy Body Dementia for years. Maybe I was difficult. The sad thing is, I didn’t know I was. That’s what is unsettling to me. I didn’t know that me being me was so challenging, that a faithful friend just couldn’t take it anymore.

I am the common denominator in these losses. I say it out loud and as humbly as I know how. I have a lot to learn. I am trying to learn. I apologize frequently and sincerely. I ask God to change me, and to help me cooperate with what He would like to do in my life.

But I can feel that I am altered. I emote less. I speak my mind in a frank manner much more infrequently and have an internal knee-jerk reaction when I do, like “Oh, why did you say that?! You should have just kept quiet!”

I used to go deep, now I dog paddle closer to the surface. Talk to me about recipes, Netflix series, weather patterns and books.

It’s an odd and deadening thing to feel that the person I am deep inside, all lumps of dirty coal and a few little sparkly jewels that do occasionally reflect His light, in a very short period of time, could be forgotten. Pushed away. Never spoken to again. Contemptible, even.

And oh — the photo above is Lloyd and me, last summer, near Mille Lacs Lake, MN.