A Sad Day In Schnauzerville

I stared at the envelope we found in our mailbox today and felt a mixture of shock and chagrin. And even though it wasn’t signed, I knew immediately who the note was from.

After the shock and chagrin faded, I felt guilty, and then upset with myself for messing up with our neighbors so soon. We’ve only lived in this house three months, and already we’re getting hate mail. Sort of.

But it’s well-deserved, yes, yes it is. You see, in our other home, we had a huge back yard that sloped down away from our house toward a little woods, with a creek bordering the back of our property. Edith and Mildred, our two Miniature German Schnauzers, would bound outside and run around the back yard, and would usually only bark if they saw wildlife. When they barked I brought them in, but we weren’t so geographically close to neighbors there and I don’t think Edith and Millie were considered neighborhood nuisances. Their barking was infrequent, even though they’re vigilant little hounds who believe their primary reason for living is to alert us when any rogue leaf moves in the breeze.

At the other house, we also had a very large front yard, so even if Edith and Millie were looking out the front window, they weren’t close enough to see all the people walking by, and they certainly didn’t yap at each passing car.

But now they do. And it’s terrible. We love our new house, but our yard is very small, which we welcome at this stage of our lives because it’s a lot less upkeep. But now we have to let our Schnauzers outside via the front door, which takes them into the smallish front yard, where people walking by with their dogs, and neighbors working in their yards are immediately visible. And whenever Edith and Millie see people, they bark. It’s not a warning, threatening bark, because they’re friendly people-dogs and just want to be loved and have fun.

If you’re wondering what our Schnauzers sound like when they bark, this is pretty close. I know it can be irritating — we’re irritated. Whenever they start to bark, one of us goes outside right away to shush them and to bring them inside. But by the time that happens, they’ve gotten a few good shrieky barks in.

Here’s how the American Kennel Club describes the Schnauzer breed:  The Official Standard of the Miniature Schnauzer for the American Kennel Club describes temperament as “alert and spirited, yet obedient to command…friendly, intelligent and willing to please…should never be overaggressive or timid.” Usually easy to train, they tend to be excellent watchdogs with a good territorial instinct, but more inclined toward barking than biting. They are often aloof with strangers until the owners of the home welcome the guest, upon which they are typically very friendly to them. However, they will often express themselves vocally, and may bark to greet their owner, or to express joy, excitement, or displeasure.

Well, our dogs have been, uh, expressing themselves vocally, and because of that, here’s what was in our mailbox today: 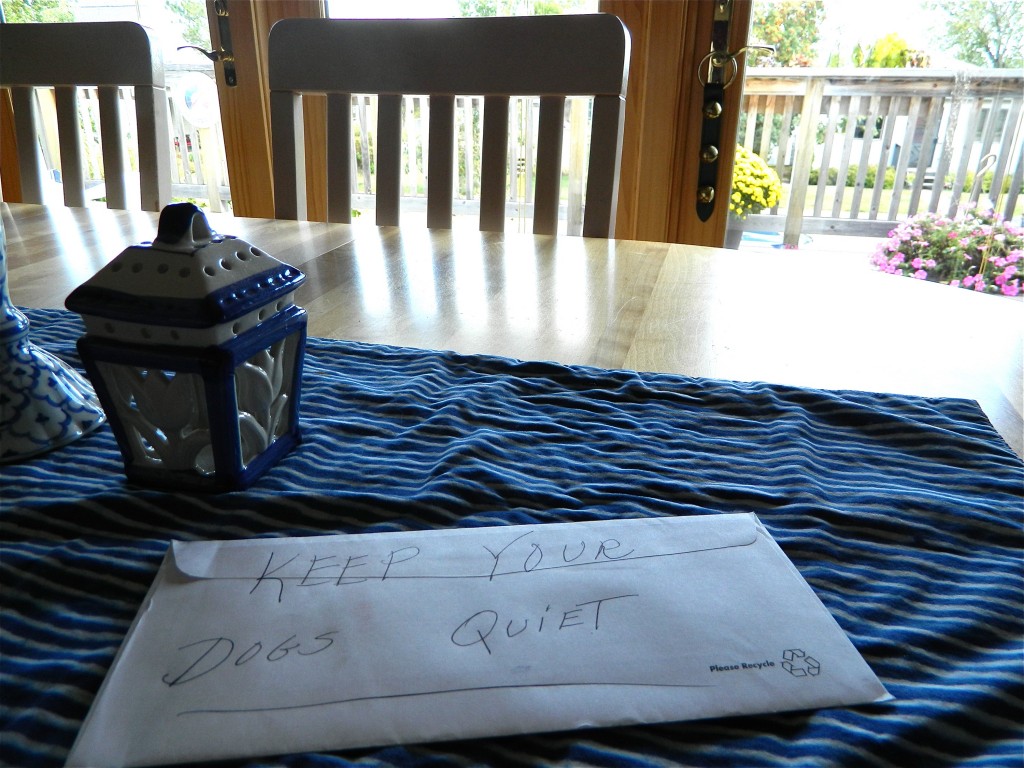 I showed Michael the note and we just looked at each other. Sigh.

I then sat down at the computer, read the reviews on amazon.com and ordered two bark collars, which will be here by Saturday morning. I bought the most humane ones with good reviews. Most of the training will be done by a recognizable beep the dogs hear. Hopefully only one little jolt will be necessary at the beginning. In case you’re wondering why I ordered bark collars, it’s because I think we’ve tried everything else. We’ve tried spraying them with a small jet of water from a spray bottle when they bark. We’ve tried tossing small circlets of (harmless) chains at them when they bark. We’ve hollered at them. We’ve reasoned with them. We’ve rewarded them when they’re quiet. We’ve lowered our voices and said ominously and authoritatively, “Nooooo.” I’m sorry to say we’ve even tried swatting them a time or two. We’ve taken them to dog training classes, where they did remarkably well because they’re so smart and learn quickly. But what they learned in the arena never translated to the yard. We’ve read the books, watched the shows, and have utterly failed.

I know this is an owner problem, I really do know that. I know that if The Dog Whisperer came to our house, he would tsk-tsk at me and would have Edith and Millie trained to be sweet and silent Schauzers in no time at all. But I have not been able to keep them quiet outside with lasting success, and now I’ve alienated my neighbors because of it.

After I ordered the collars, I asked Michael to pray for me, and I walked across the street to apologize to Burt and Arlene. They’re a retired couple I introduced myself to the first day we moved in. Burt was nice enough that first meeting, but when he waved for his wife Arlene to come greet me, she was kneeling in the garden and declined, waving me off in an impatient gesture that was a little surprising. This afternoon as I approached their house (which you can see in the photo above), through an open front window I heard an interior door close, so I knew someone was home. I knocked and they didn’t answer. I rang the bell and they didn’t answer. So I walked back home. I found their phone number on the internet easily enough, and called them. They didn’t answer but their machine wished me a very good day. I left a message telling them it was their neighbor Julie from across the street, and I sincerely apologized that they had been bothered by our dogs, and I let them know that I had purchased bark collars that would be here soon. I told them we were truly so sorry, that we want to be good neighbors, and that I hoped our dogs would be under control soon. And I thanked them for telling us.

It’s a Sad Day in Schnauzerville when inept Mommy and Daddy have to resort to a “specialty” collar to keep our little dooginses from doing what is totally instinctual: expressing themselves vocally.

I’ll let you know if The Schnauzer Silence descends.