Anyway, a few months ago I started getting these regular feelings, or nudges, or subtle promptings, or whatever one would call them, about writing letters to the wonderful people in my life. I’ve written lots of letters over my half a century, so this wouldn’t be something new, but the nudges, those inward-elbow-in-the-ribs sort of feelings I was getting, have been really strong. So I’m going to act on this.

For me, 2010 is going to be The Year of the Love Letter. I am going to write a love letter to every person in my life who is supposed to get a love letter from me. I don’t know yet who all the recipients will be, but of course there are some obvious people who are at the top of the list. I have a husband, I have some children, I have some grandchildren – I think they should go on the list, don’t you? 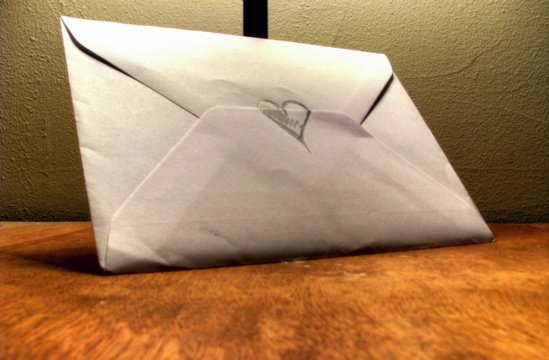 Other than the fact that I have an intense desire to write love letters to those I love, I don’t know what this is all about. Don’t think it hasn’t crossed my mind that perhaps the woman born in the year of the rooster feels impressed to make 2010 the year of the love letter because perhaps it will soon be the year of the earthworm. But that could also just be my melancholy nature taking hold. It does that a lot, and I try to pay no attention to it.

At any rate, I feel a certain kind of anticipatory joy about sitting down every couple of weeks or so and taking pen and paper in hand (no e-mail for these love letters!) to write to whomever I’m supposed to write to. I could cry just thinking about it.

I have no idea who I’ll write to first. I have no idea what I will say (other than “I love you so much”), but it has been a long time since I’ve felt so certain about something.