The sun is coming up as I type, and the magenta, dusky purple and cantaloupe orange streaks are exquisite. I’ve been up for over an hour, and am always glad for the sun. Getting up when it’s “peach black,” as my granddaughter Vivienne used to say, becomes a little less desirable as one ages.

Last week I took care of Chris and Sharon’s four children while they jetted off to a land of turquoise waters and fine yellow sand, swaying palms and clear rain forest pools, cabanas and swimming with dolphins, and personal butlers and sleeping late in canopied beds and reading while listening to the gentle lapping of waves….

I’m not bitter at all.

The kids had the whole week off from school, and I decided that while Mr. McBoy, Mrs. Nisky, Li’l Gleegirl and Baby Shamrock (also known as Louiser) were with me, we would try to do one fun thing a day outside the house. One day I took them to the library and out to lunch at the Duluth Grill, two of my favorite places on earth.

Another day we bought two loaves of bread and drove up to the cemetery to feed the ducks and geese who for some reason never migrated and now huddle together in the cold near the iced over pond. The birds were obviously not a gluten-free species, and flew to us in a frenzy and gobbled up every crumb we offered, and the kids loved it. Then we decided to break the rules and drive to Dairy Queen in Canal Park to each have a mini-blizzard before going home for lunch. Dessert before the main meal is what grandmas can do if they want. 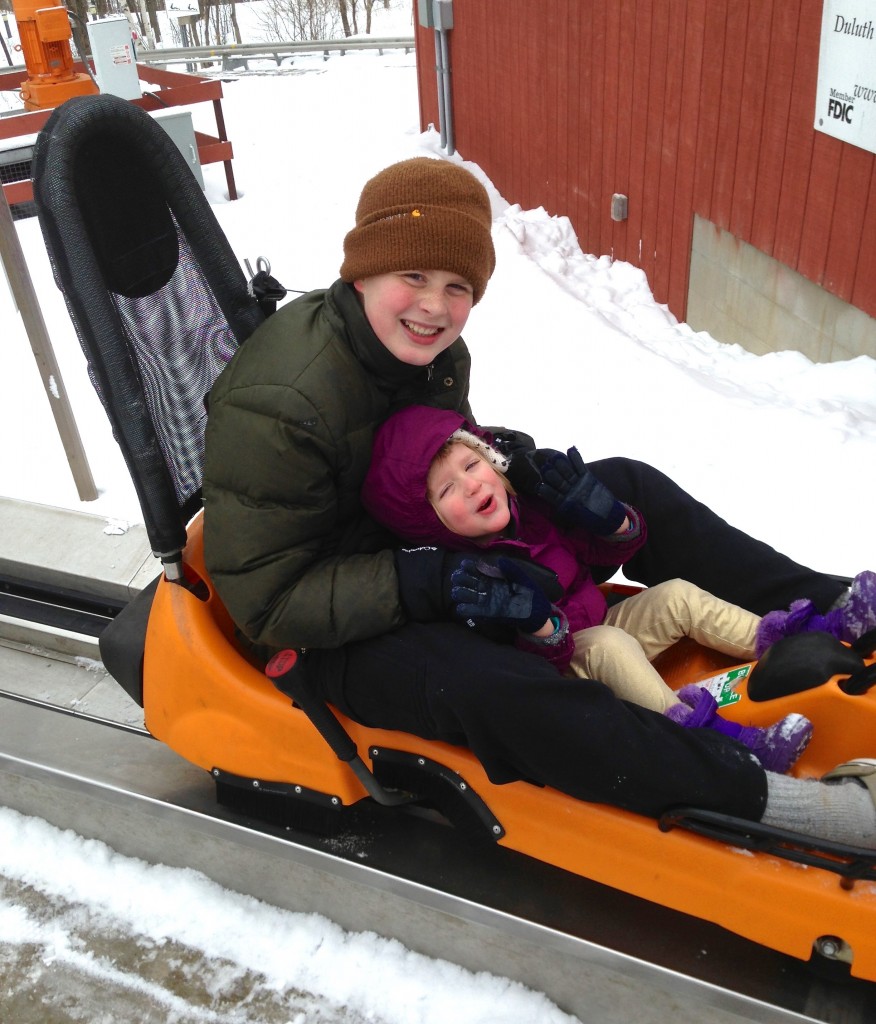 Another day I took my grands to the Timber Twister, which is quite the thrill in the winter. Ice cream headaches without the ice cream, and wonderful exhilaration. 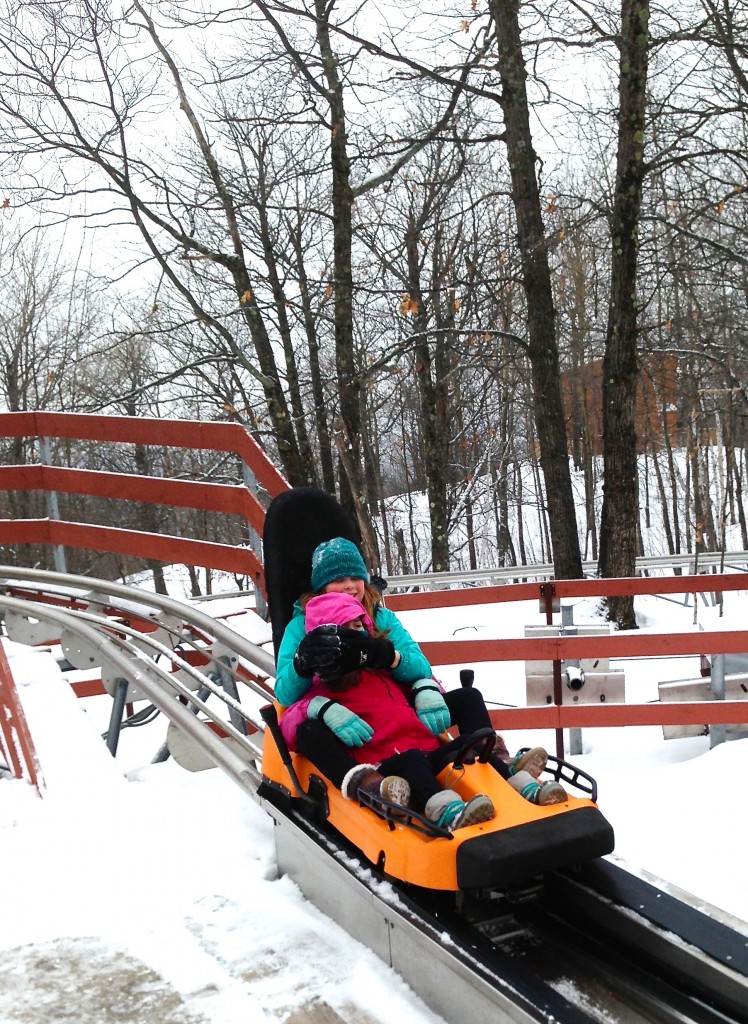 Another day we went to Bayfront Park, which of course was almost empty because there was snow everywhere. The kids were warmly dressed in snow pants, boots, mittens, coats and hats, so playing outside in the 20 degree weather wasn’t bad. The nearby outdoor skating rink was open, and they took advantage of the free ice skates and sleds, and had a great time ice skating for about a half hour. Louiser is too little to manage skating, so she sat on a sled while her almost fourteen year old brother skated and pulled her around the rink with a tow rope. What a beautiful memory for me, watching them skate by as I sat and watched, huge grins on their faces and cheeks rosy from the cold.

When at home we played countless card games of Gin and the dice game Farkle. I’m not a Monopoly lover but the kids are, so they played that several times. I put on some kind of movie for them each day too. A grandma needs a few minutes here and there to rest and recuperate in a recliner. They watched an old animated favorite called The Rescuers, Tangled, and I introduced them to one of the best films ever, The Hiding Place. Here’s the trailer, and if you’ve never seen the entire movie and would like to, click here. Absolutely unforgettable. Mr. McBoy has a great sense of humor so one afternoon I put on a DVD by Michael Jr. for him. He’s a comedian who happens to be a Christian, and here’s a clip of his to prompt a smile for you today.

And, every night after dinner, we watched an episode or two of “The Great British Baking Show,” streaming on Netflix. (In the UK it’s called “The Great British Bake-off.”) If you have Netflix and haven’t seen this yet, you must watch. Even if you don’t think you’ll like this sort of thing, just tune in and watch the first episode and see if it isn’t the best thing you’ve watched in a long while. Here’s a short trailer from the BBC on the first season. I played the show because Mrs. Nisky and Li’l Gleegirl love to bake and I knew they’d enjoy it and feel inspired. But even Mr. McBoy loved it and got into the competitiveness of each episode. We all got to know the contestants and root for different ones, making our predictions about who would win and why. I’m looking forward to when Netflix carries season two.

And now onto something much less interesting and not at all uplifting.

Those of you who have stopped by my blog for any length of time know that I rarely mention politics. But I’m going to say a few words today because I might erupt if I don’t.

I lean a bit right on the political spectrum. I’m not as conservative as some of my Christian friends and family, but I hold to a few of the basic tenets of conservatism, yet also embrace a few of the tenets of the Democratic party. I don’t think I’d go so far as to label myself a right-leaning liberal, but I might say I’m a left-leaning conservative. I have always believed it is a privilege to vote and have taken that responsibility seriously and prayerfully. When candidates I didn’t support were elected, I grieved for a day and then decided to pray for them, as the scriptures clearly admonish us. I have never liked the loud factions that badmouth our elected officials in a condescending, reviling way. I might intensely dislike and even deplore what an elected official stands for and has done, but I want to speak my mind about him/her in a productive way, and I know I’m supposed to pray for them.

Now we’re all watching as we’re approximately eight months away from electing the 45th President of the United States, and we see that Donald Trump is surging ahead of the other Republican contenders. I’ve always believed Hillary Clinton would be our next president, but it seems like anything could happen now.

I’m not surprised that Trump is doing well. What surprises me is that so many Christians wholeheartedly support him. I don’t understand that at all. A friend of mine said Trump is ahead because he’s saying the things that so many people are thinking. Well, he’s not saying what I’m thinking. Trump might want to make America great again, as his motto promises, but if he is our next president, so many new and disturbing precedents will be set I hardly know where to begin.

He says he is pro-life and conservative with family values, but he would be the first president we’ve had who has owned a strip club.

It was a scandal when Bill Clinton was found to be cheating on Hillary in the Oval Office and publicly lying about it. By his own admission Donald has not been faithful to his wives but it doesn’t seem to matter to Christian America anymore. Character doesn’t count, but a good business sense, building a mammoth wall, and deporting millions of illegals does. Never mind that 1 Timothy 6:10 says, For the love of money [that is, the greedy desire for it and the willingness to gain it unethically] is a root of all sorts of evil (Amplified version), and this is one of the traits that characterizes Trump most accurately. A lover and pursuer of money above all else.

And while Trump professes to be a (Presbyterian) Christian and waved his childhood Bible around while making a speech to largely evangelical voters, he admits he has never repented and asked God for forgiveness, and just tries to move on and do better.

I do not have the right to judge someone’s heart, and I have absolutely no judgment for Trump. The intentions of his heart are between him and God. But we do get to observe our candidates and try to discern what kind of fruit their lives are growing, and what kind of presidential fruit they might cultivate if elected. What kind of character traits mark the life of Donald Trump?

At our monthly SAGs meeting the other night, my friend Gail said, “Can you imagine Donald Trump in possession of the nuclear codes?” and we all stared back at her and felt the weight of that ominous possibility.

And I’m wondering if the Democrats are waiting until he wins the nomination to present this tidbit, or if it’s old news and I just didn’t know it. Donald Trump was a stalker. Did you know that? Did you know that while he was married, he tried to seduce a female reporter and then stalked her, for years? And when she ultimately threatened him legally he then repeatedly disparaged and castigated her? Here’s the reporter’s version of the story.

Lastly, the way he belittles and mocks people is almost unbelievable to me. Can you imagine Jimmy Carter making fun of a reporter with a disability, like Trump does in this video?

Even Max Lucado, who usually stays quiet about politics, has had enough of Trump and spoke out recently. You can read his wise words here.

I have no idea who I’m going to vote for in November. It’s the first time in my voting life I’ve been this unsure, but I do know that I will never cast a vote for Donald Trump. If he becomes my next president I will do more than just grieve for a day.

And because I don’t want to end on a strident, offensive note, I’ll share something a bit more buoyant, at least for me. Ever since Michael died I thought I might consider attending a grief support group, or even search out a grief counselor, but as this past year has flown by, I never did. Recently a friend of mine whose husband died a month ago, told me about a grief support group she tried out. Her beloved had Parkinson’s and Lewy Body Dementia from Agent Orange too. Vicki texted that she thought I should try it out, so I acted on that nudge and went to my first meeting on Wednesday. It was very well attended, was for people over 50 who had lost spouses, had a quiet but skillful facilitator, and I enjoyed being there so much. Every person shared. One person had been in the group since 2013, and many had been there for over a year. Several people said they felt the group had been the single most helpful thing for their journey through the valley of grief. There was compassion, openness, unashamed tears, love, empathy, friendship, vulnerable sharing, encouragement and hope in that room. A handful spoke of their Christian faith as well. It meets twice a month and I look forward to going back. It’s nice to have something to look forward to apart from heaven. Just kidding. Sort of.

I’ve stepped down off my soapbox now. And may I lastly say that if you’re a Trump supporter, you are so welcome here, and your comments would be appreciated and respected as well.

I hope you have a blessed weekend, friends…